Separated by 100 years, ancestors have a common passion for education 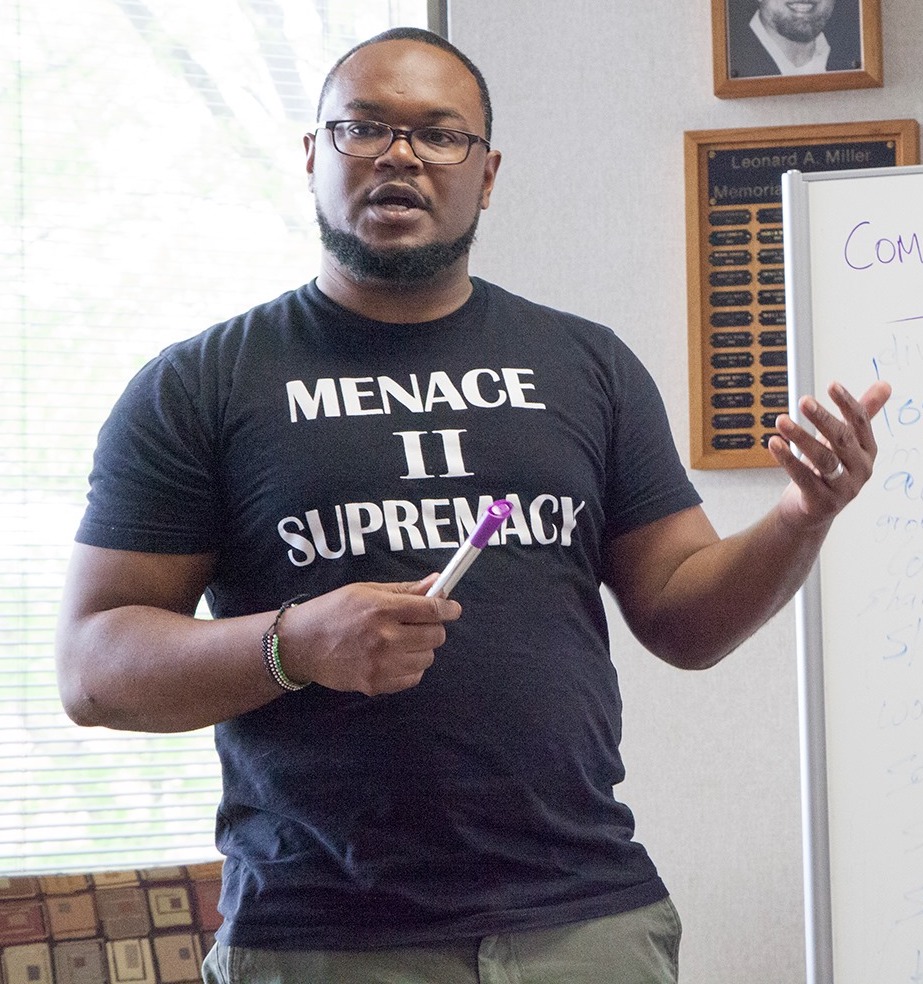 Everyone comes from somewhere. All people are descended from ancestors, some of whom likely led colorful lives and achieved remarkable feats in their time. But many people either don’t know about their ancestors or don’t take the time to research them.

Ever since he was a young child attending family reunions, Harris, 36, was always interested in exploring his family’s genealogy. It helped inspire him to attend Wake Forest University as an undergraduate student in the early 2000s, where he majored in history and took several African-American history classes.

One of the projects during his senior year was chronicling the history of African enslavement in the central piedmont region of the state, specifically the area that’s now Anson, Stanly and Montgomery counties. This interested him because his family has lived in the area for several generations.

His interest in his family’s history led him to one of his oldest-known ancestors, Celia Easley, a biracial, enslaved woman who was able to free herself and eventually purchase land. Though much is not definitively known about her, a story about her life was published in the Stanly News & Press in 1952. Former SNAP features editor Fred T. Morgan wrote the story based on interviews he conducted with older African-Americans in the area where Easley lived.

As best Morgan could recall, the first documented evidence of Easley was recorded in 1833 and lists her as being from Anson County. Morgan surmises that her father was likely a wealthy white man who was part of the Easley family and “probably gave her her freedom and showed her every consideration while she remained on his plantation.”

At some point, Easley purchased a 100-acre land in the Cottonville area. She eventually settled down with a former enslaved man in the area named Harry and they had six children, who all were born free persons. Almost all African-Americans in the area at the time were slaves. Easley went on to accumulate more land (potentially as much as 400 acres) for her family. She died in the mid-1850s, according to the article. She was Harris’ 4th great-grandmother.

The life of Easley was part of the family lore in Harris’ family, though he’s not sure if it was due to the article by Morgan or actual family knowledge passed down through generations. Much of his knowledge about his family comes from his grandfather, Brady Crump Jr., who still lives in Albemarle and who is “our family’s unofficial historian.” His grandfather possesses lots of old family photos and family Bibles that had been passed down and Harris used these historical items as starting points with his research.

Through his research, Harris discovered one of Easley’s grandchildren, Charles Gaston Davis, was born in Cottonville in 1880. As best Harris can tell, Davis, who was his third-great uncle, was the first person in the family to go to college, when he enrolled at A & T College in Greensboro (what is now North Carolina A & T State University).

In the span of only two generations, the descendant of a woman born into slavery was able to attend (and graduate from) college during a time when African-Americans still faced widespread discrimination and disenfranchisement due to Jim Crow laws and when many likely never considered higher education as an option. 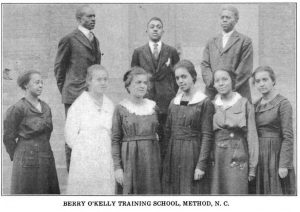 Faculty members at Berry O’Kelly Training School, where Davis first started teaching in 1919. As best Harris can tell, his third-great uncle Charles Gaston Davis is the man in the upper left hand corner of the picture. (Picture provided by Wesley Harris, Jr.)

Part of Davis’ life while at the college is recorded in the N.C. edition of “The History of the American Negro,” published in 1921, which detailed biographies of African-American men and women at the beginning of the 20th century.

Davis was likely educated in the Cottonville area of Stanly County, though according to Davis’ biography, it’s stated he was a product of Stanly County public schools. He arrived at A & T College in 1899, after he borrowed $5 from his brother who took him to the train station. Once at school, Davis worked several odd jobs, including washing cows’ feet and pasting mud on the inside of forges, to be able to pay for his board. He finished school in 1907 and ended up earning a medal given to the student with the highest marks in mechanics by the Odell Hardware Company. 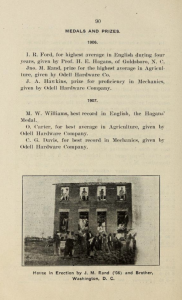 Charles Gaston Davis was awarded a medal in 1907 (provided by the Odell Hardware company) for having the best record in Mechanics while at college. (Picture provided by Wesley Harris, Jr.)

In addition to his work in the classroom, Davis was also vice president of the college’s athletic association.

Upon graduation, Davis taught at the Palmer Memorial Institute in Sedalia for two years. In 1919, he moved to Method, a small town near Raleigh, where he was in charge of the agricultural department and vocational training at Berry O’Kelly Training School.

Davis married Lillie Jones and they had one child, Charles Gaston Davis Jr. He was also a member of the A.M.E. Zion church.

Unfortunately not much more is known about Davis, and Harris is not sure how long he taught at Berry O’Kelly Training School.

From what is known about Davis, what makes him so unique is that “we don’t have many stories out there about black folks going to college from Stanly County at the turn of the century,” Harris said.

Though he first casually knew of his relative around 2002 when he was an undergraduate student, Harris didn’t discover Davis and his backstory until around the time he moved to Iowa State University in 2015 to start his PhD program at the School of Education. He’s currently a graduate research assistant and is completing his dissertation and applying for jobs. He wants to work in higher education, either as a professor or a student affairs administrator. Harris said coming back to work in North Carolina is definitely high on his priority list.

Though he is living in Iowa, much of Harris’ family, including his parents and three of his four grandparents, still reside in Albemarle.

To quote Mark Twain, “History doesn’t repeat itself, but it rhymes,” and that appears to be the case when examining the similarities between Harris and Davis, who were born almost 100 years apart from each other.

“I’m an aspiring educator and I had this distant relative who was an educator,” he said, adding that it’s important to him that he shares a common passion for education with Davis.

While Davis’ career as an educator wasn’t the sole reason Harris decided to follow a similar path, “It adds fuel and it has been something that has kind of motivated me and inspired me since I’ve been in this PhD program, that if he can go to college during that era and be successful, then I, too, can be successful.”