After more than 100 years, the Albemarle Sweet Shop is still very much in business 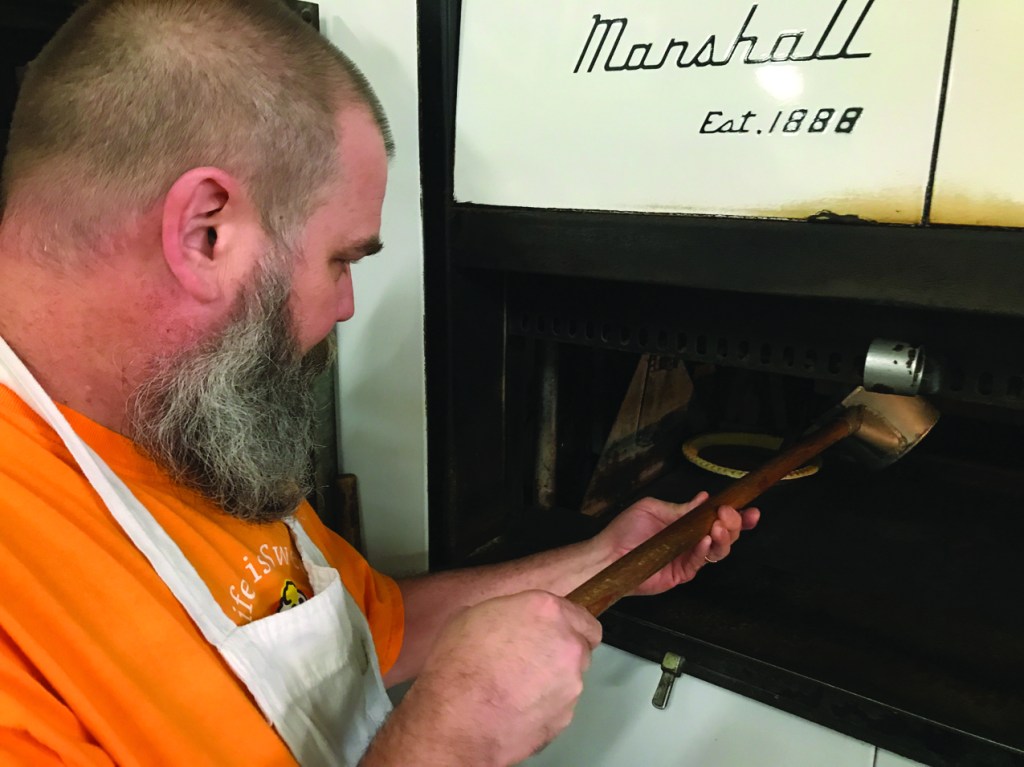 Shawn Oke adds chocolate filling to one of his pies at the Albemarle Sweet Shop.

Several years ago, Albemarle Sweet Shop owner Shawn Oke was pulling a pineapple coconut pie out of the oven when he lost control and the filling, which was scalding hot at around 350 degrees, spilled over his arms.

“It makes for a big blister,” he said.

But he laughs it off. Life at the sweet shop is not nearly as taxing compared to his former job.

“The stress of getting burned by a pie isn’t nearly as bad as getting burned trying to save someone’s house,” the former Albemarle fire chief said. “I’ll take the pie burn any day.”

Oke, 50, is the latest owner of the venerable shop (located along King Avenue) known for its clown and sugar cookies. It has been a staple in the Albemarle community for more than 100 years. Many customers have grown up coming to the bakery and now enjoy taking their children or grandchildren.

Chasity Friend, 21, of Albemarle, who works as a cake decorator at the bakery, said her mother used to work as a decorator and would bring home baked goods for Chasity to enjoy.

Friend is one of six full-time employees in addition to Oke’s two sons who help out part-time. Though they are small in number, they know how to bake and sell sweets. In a typical week, the business goes through roughly 200 to 300 pounds of powdered sugar, along with 500 to 750 pounds of icing. It sells 200 to 400 clown cookies and 500 to 600 sugar cookies.

Candice Mullen of Locust always takes her three children to the bakery during days off from school.

“This is our Albemarle treat,” she said, adding that her kids “get anything with the most icing.”

“Anything that’s hometown and has a great history, we enjoy supporting,” Mullen said.

The Albemarle Sweet Shop likely has a history that few bakeries in the area can match.

According to information given to Oke from historian Lewis Bramlett, the earliest known precursor to the current Sweet Shop was a bakery opened by G.W. Baker in 1905 on North Second Street. The building was owned by Noah Pennington, who took over the bakery in 1906.

The Harris Bakery, operated by J.W. Harris, opened in 1912 and ran for several years before closing due to World War I. Ground was eventually broken for a new bakery building on King Avenue in 1921.

The business changed hands several times before the Whitley family purchased The Albemarle Bakery from Peter Endres in 1934. Harold Bagwell later bought the shop in 1972, followed by Bud and Karen Haley in 1994, before Shawn and his wife Laura took ownership in 2000.

“It’s kind of like your family,” Oke said when describing the history of the shop. “The names have changed a little bit, but we’re all related.”

Though times have changed, much of the Albemarle Sweet Shop hasn’t. Besides residing in the same building for almost 100 years, the employees use the same oven, mixer and fridge that were used in the early 1960s and everything is still hand cut.

Even the shop’s phone number has remained constant. Oke said the company’s number matches the number he’s seen in ads dating back to the 1930s.

“It’s an honor,” Oke said about operating what is considered a legacy to so many in the county. “There’s so much there for the community that I need to make sure I protect and preserve.”

But it wasn’t always in the cards for Oke to run the business.

Originally from Massachusetts, Oke grew up in Union County. After high school, he sent firefighter applications all along the East Coast and would regularly check the Security Employment Commission each Friday for firefighter job openings. He eventually moved to Albemarle to start his career as a firefighter.

But it didn’t seem like Oke’s fate necessarily revolved around sweets. He said his only recollection of the Sweet Shop during his early years in the city was seeing its custard pies at Harris Teeter. He doesn’t remember spending time as a customer at the shop. 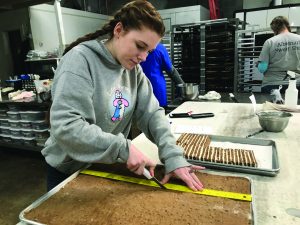 Oke had a goal to try and become a millionaire before the age of 40 and knew he wouldn’t become wealthy enough working at the fire department. So he opened the Firehouse Espresso Cafe in 1997 on property that is now Off the Square restaurant.

It was during his time at the cafe that he happened to strike a conversation with Bud Haley who expressed his desire to sell the Sweet Shop and move to the coast.

It was the perfect storm for Oke, who was immediately interested in the proposal.

“My mom’s uncles owned a bakery in New England, so I had some family history there. So I’m like ‘Ok I have some people who can help advise me,’” he said. “I love to eat, I love to bake and I want to be a millionaire before I’m 40 and here’s a business venture. Let’s do it.”

Two months after his conversation with Haley, he bought the Sweet Shop in April of 2000.

As he met with Haley at David Beaver’s law office to sign the paperwork to make the ownership change official, Haley handed him a box full of hand-written recipes.

“Here’s what you paid all that money for,” Oke said Haley told him.

Though he doesn’t know for sure how far back many of the recipes date, he does know that the famous fruit bars were created in the 1940s during World War II. The bakery shipped them to Albemarle troops overseas to give them a taste of home, Oke said.

He later sold the cafe because he couldn’t handle managing the two businesses while also working at the fire department.

One of his employees at the cafe, Barbara Pryor, who had a background in cake decorating, transitioned to the Sweet Shop and managed the bakery while Oke served as fire chief. It was his employees who convinced him not to sell the business when he initially became chief in 2009.

He also acquired a full-time baker in 2009, Pam Burris, who, through another fact of fate, happened to be the daughter of Harold Bagwell, who ran the shop for more than two decades. She grew up learning how to decorate clown cookies.

“I’m just really glad that it’s kept going on” over the years, Burris said. “It was cool to come back.”

It has been so successful because “it was here when everybody grew up,” she said. “It’s like a favorite memory that you have as a kid.”

After serving as Albemarle fire chief for almost 10 years, Oke retired in 2019 to devote himself full-time to the Sweet Shop. He proudly states he hasn’t shaved since May 31, his last day on the job and he wants to go a full year before starting back.

“The fire service was my life and I just had to close that chapter in my life,” he said. “I’ve had to not try to focus on what’s behind me but what’s ahead of me.”

Though he enjoyed his job as fire chief, he appreciates that his current job is a lot less stressful.

He has enjoyed having more free time on the weekends along with more time to tinker with new creations. 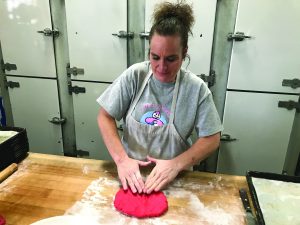 The shop recently introduced several new sweets, including a gingerbread cookie, several layer cakes and a caramel apple cinnamon cake. Oke is working on a white raspberry chocolate cheesecake for a local restaurant.

Oke credits the shop’s robust following (its Facebook page has almost 8,100 followers while its Instagram account has 3,600) to the proven recipes and the fact that the business has been on the same street for almost 100 years.

And he knows and appreciates them.

“I love seeing the smile on a kid’s face when they come in and they see those cookies,” he said. “I want to keep that, I want people to have that safe haven that they can escape all the mess that’s going on in the world and come in here and get a cookie and be happy about it.”

And Oke wants to continue to honor the sweet shop’s legacy while also working to expand the business. He has plans to create a website and wants to start shipping the products outside of Albemarle. He has also considered the possibility of working with people to open more locations.

“I hope that the bakery in Albemarle will continue for many, many years and the Oke name will be tied to it,” he said. “I’ve been given a golden opportunity to have a piece of Albemarle history and I want to make sure that I keep that and I take care of it and I honor it.”