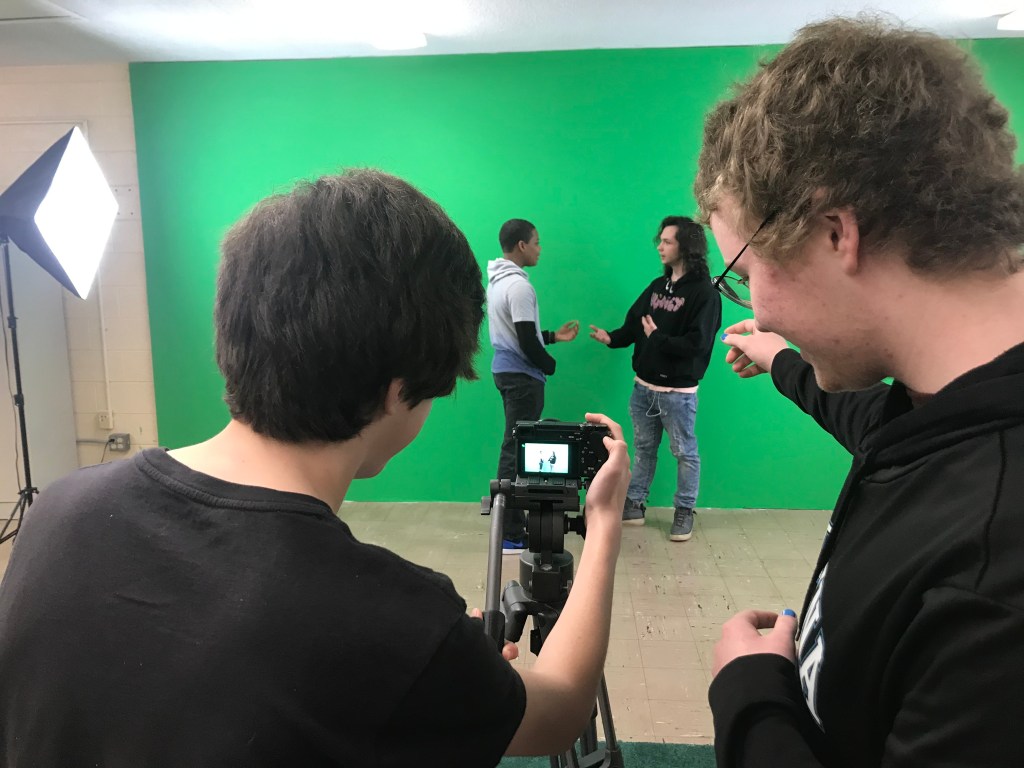 The students in John Thompson’s digital media classes at West Stanly High School don’t have to go far when they want to shoot a school commercial or work on a short film — they just have to go to the neighboring classroom, which has been converted into a digital studio.

After years of teaching digital media and multimedia and web design courses while also collecting various film equipment (cameras, lighting), last school year Thompson convinced the school to help fund a new studio. With the offering of a new Adobe Video Design course, he wanted to offer the students a place where they could actually shoot videos.

Dubbed by students as “The Vault,” the studio is equipped with a 20-foot by 9-foot green screen — technically a green wall, several types of cameras, acoustic tiles, blackout curtains, a boom mic and lightning gear. Several movie posters, such as “Jaws” and “The Godfather,” adorn the walls to give the room a cinematic feel. There is also a charging station for the cameras and storage space for all of the equipment.

The cost of setting up the studio was less than $1,500, Thompson said. 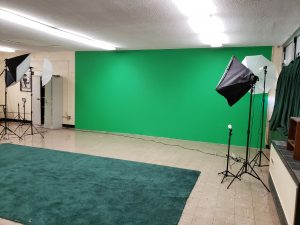 The digital studio is equipped with a green screen along with several cameras and lighting gear. (Picture provided by Chad Whitley)

“I wanted it to be as professional and real-world like as it could be,” said Thompson, who’s offering a video production class for the first time this semester. Before the digital studio, Thompson only had a makeshift fabric green screen, which often had wrinkles.

He said West Stanly is the only county high school that has a digital studio.

Last school year, Thompson spent time researching what would be needed to create a digital studio. He made trips to local production studios in the area, including TA Films in Mooresville and Fox Sports’ studio in Charlotte, to learn about how best to construct and light the green screen wall. Thompson also met with Jennifer Moxley, head of Sunshine Media in Charlotte, and a Stanly County Schools graduate, who is planning to visit Thompson’s students and help get the studio’s lighting set up.

Thompson and a few students met last summer to clean out the classroom and paint the green screen wall that Charles Edwards’ cabinet-making class helped to construct. They also set up the lighting and added sound baffles, which help to absorb sound and improve acoustics. The digital studio was finished around Thanksgiving.

“Everything that’s been done in there has been done by students,” Thompson said. “They got a sense of pride because they built this and helped me design it.”

His digital video students recently filmed a commercial advertising Xello, a career exploration website, to inform students of the different CTE classes offered at the school — the first big video project that was filmed in The Vault.

Thompson wants to utilize the studio to shoot more commercials along with movie trailers, special effects videos and short films. He also wants to use the studio as a way to promote other classes and groups at the school, such as upcoming productions from Wes Tucker’s theater classes.

“It’s so much easier when it’s time to say, ‘Hey we need to shoot some footage,’ and we just go next door and everything’s pretty much already set up,” Thompson said.

His students have also enjoyed the new digital studio.

“I like doing stuff for other people, like the commercials that we do,” said sophomore Drew Speight, who is in Thompson’s advanced digital media class.

“Doing the commercials for other people is very fun because a lot of times you have free rein to do what you want,” said junior Payton Porter.

Porter’s favorite part of the class is filming while Speight most enjoys editing.

Porter, Speight and other students do all the filming and editing that goes into creating the videos. Thompson usually just gives the students the script for a video and then they take over.

“We will continue to tweak and make changes and additions as necessary, but we are proud of how the studio has progressed and our students are really excited about using it,” Thompson said.