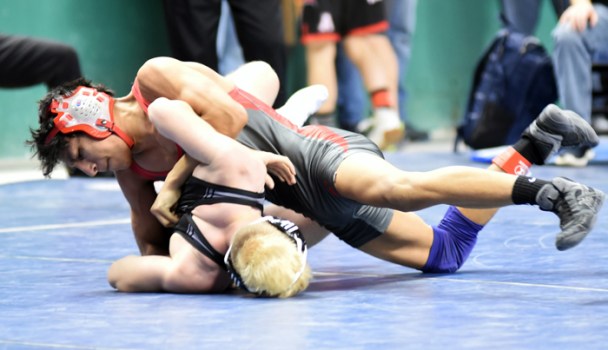 Renfere Garcia finished in third place in the 1A 132-pound division at the 2020 NCHSAA wrestling state finals. (Contributed by Starla Whitley) 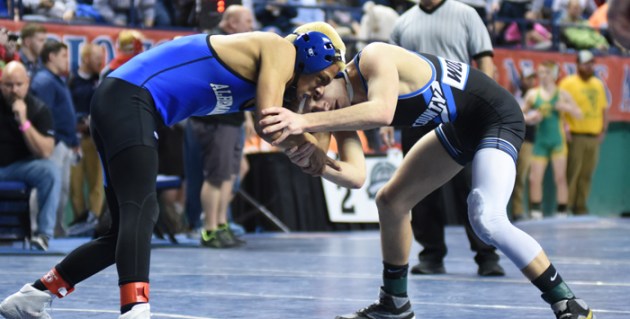 Ricardo Bustos earned a third-place finish for the Bulldogs battling through the consolation rounds. He won 10-4 over David Garcia of Granville Central, then reached the third-place match with a 9-2 win versus Ronan Carletta of East Carteret. In his final match of the tournament, Bustos pinned Polk County’s Satchel McCoy in 2:41 to earn the bronze medal.

Unique Carvalho reached the quarterfinals for the Bulldogs in the heavyweight division but lost to C.J Henderson of Elkin by pinfall in 3:55. Henderson ended up second overall.

Carvalho battled back in the consolation bracket by pinning Orion Martin of North Stokes in 1:33 and then faced a familiar opponent in the consolation semifinals, South Stanly’s Khris Mayo. The two wrestlers had met twice previously in the 2019-2020 season with each earning a pinfall win. This time, the battle between the two county rivals went into overtime, with Carvalho earning the pinfall win in 6:25.

In the third-place match, Carvalho lost to Ezekiel Jayne of East Carteret by pinfall in 59 seconds..

Albemarle’s Adrian Little entered the tournament as one of the top-ranked wrestlers at 195 pounds in the 1A classification, having finished second last season in the state. Little lost 5-4 in the first round to Trey Thompson of Polk County but rallied to reach the consolation semifinals. Little was pinned in 3:38 by Jordan Mitchell of South Stokes.

Albemarle also had Naquian Carpenter compete at 220 pounds, losing both matches by pinfall, along with Horveli Rodriquez at 106, who was pinned in both of his matches.

At 132 pounds, Renfere Garcia finished in third overall. Garcia reached the semifinals but lost in overtime by pinfall in 6:37 to Polk County’s Preston Burnett. He won in the consolation semis over Braeden Reiss of Rosewood with a 2:27 pinfall, then posted a 2-1 decision in the third-place match versus Cherryville’s Ryan Riffle.

Trent Drake finished fourth for South at 145 pounds, He initially reached the championship semifinals but lost an 11-4 decision to East Wilkes’ Austin Bauguess. Drake rallied in the consolation semifinals, pinning Riley Pruitt of Alleghany in 3:26. He then lost the third-place match to Uwharrie Charter’s Grayson Roberts 5-4.

Hunter Barrier also finished fourth for the Bulls in the 152-pound division, winning by pinfall in 4:51 in the quarterfinals over Cherryville’s Chase Miller. Barrier lost a 19-7 majority decision in the semifinals to Jerry Jiminez of Uwharrie Charter, but responded with a 9-5 decision in the consolation semis over Swain County’s Hunter Craig. Barrier then lost by pinfall in 1:58 in the third-place match to Lejeune’s Alexander Suszko.

Tony Rogers, at 220 pounds, finished fourth for South, after winning in the quarterfinals with a 1:05 pinfall victory over Hayesville’s Ethan Taylor. Rogers lost by pinfall in the semis to Levi Andrews of Avery County, then responded with a pinfall win in 1:18 in the consolation semifinals versus Samuel Shook of Mitchell. Rogers then lost a 12-6 decision to Mt. Airy’s Eric Olvera in the third-place match.

Sophomore Meliek Bryant became the first Comets sophomore in recent history to reach the state finals for North Stanly. Bryant lost both of his matches in the 1A 195-pound weight class by pinfall, first to Jackson Tumbarello of Mount Airy then to Albemarle’s Little.

Andrew Becker was the lone representative for the Colts in the 2A state finals, wrestling at 182 pounds. Becker lost in the first round by a 10-2 majority decision to Newton-Conover’s Cole Clark. Becker then won in the consolation first round by pinfall in 4:06 over Christian Franklin of Ledford. He was eliminated from the tournament in the next round, losing 9-2 to Croatan’s Dakota Gray.