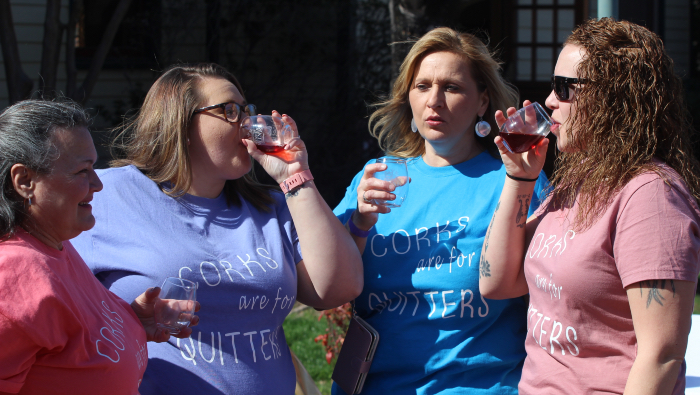 Hundreds of people from across the region laughed, smiled and danced their way around Market Station in downtown Albemarle Saturday — with the help of a few glasses of wine — as part of the 11th annual Stanly County Winter Wine Festival.

Wineries across Stanly and neighboring counties were on hand to showcase their selections to eager patrons, many of whom were young and came in groups.

Albemarle Councilman Chris Bramlett, who enjoys a nice Riesling, remarked that “I’ve never seen anything like this,” when it came to all of the young people that were in attendance. He added the huge influx of people is good for the local economy.

The festival, which is organized by the Albemarle Downtown Development Corporation each year, usually attracts around 1,000 people, though ADDC director Joy Almond estimates the number was likely higher for this year’s event. She said online pre-sales for the event doubled compared to last year.

With each passing year the festival seems to grow thanks to word of mouth and tweaks the ADDC makes, Almond said.

The wineries participating in the festival also seem to increase each year. More than 14 wineries were at the festival this year, including Cabo Winery in Concord and Seven Jars in Charlotte, who were there for the first time.

Karman Kelly and her twin sister Keelie Crayton were at the event for their first time. They came to celebrate their 30th birthday and plan to make it an annual tradition. Their favorite winery was Dennis Vineyards in Albemarle. 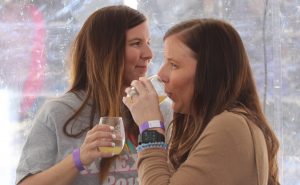 Keelie Crayton and her twin sister Karman Kelly came to the festival to enjoy wine and celebrate their 30th birthday.

Albemarle resident Terrie Holshouser, who was at the festival for the third time, came with a large group of friends. She likes Morgan Ridge Vineyards and Dennis Vineyards.

Julie Plyler of Oakboro likes “running to different folks that I haven’t seen in a while and just enjoy a good time.”

Though Plyler, who likes semi-sweet wine, enjoyed Woodmill Winery and Cabo Winery, “everyone has something that I’ve enjoyed,” she said.

Hayley Braswell of New London came with a group of friends, including her sister Katelynn Honeycutt, who all wore customized T-shirts that read: “Corks are for Quitters.”

“We come out here every year and everybody always asks us about our shirts that I make,” Honeycutt said.

“Everybody’s happy, everybody’s smiles, no one’s mad at each other, they’re just trying to drink a little wine and have a good time,” said Roger Eudy, who enjoys interacting with and meeting new people. Eudy and his wife Joan enjoy Morgan Ridge Winery. 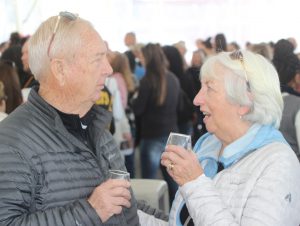 Roger and Joan Eudy enjoy some wine at the festival.

Lori Coley from Albemarle has been to the festival every year since it first started over a decade ago. She said her favorite part is taste testing the various wines that are offered. 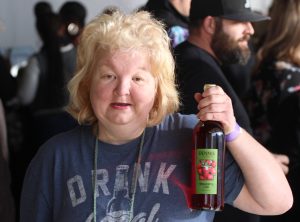 Lora Coley of Albemarle has been to the wine festival each year since its been around.