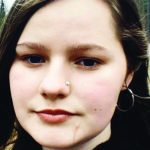 While there are books on the shelves, Williams wanted a place where students could work together on Chromebooks and the students would be able to project four Chromebooks at the same time to one screen, much like in college libraries.

After sitting down with English/theatre instructor Chuck Carte and Principal Emily Shaw to explain the idea, Shaw gave Williams the go-ahead to move forward.

While money is tight, Williams reached out to area businesses to become “Friends of the Library.” These donations made it possible for Albemarle High’s library to move forward. Albemarle High is thankful for these donors.

Hanna Williams is a junior at Albemarle High School.