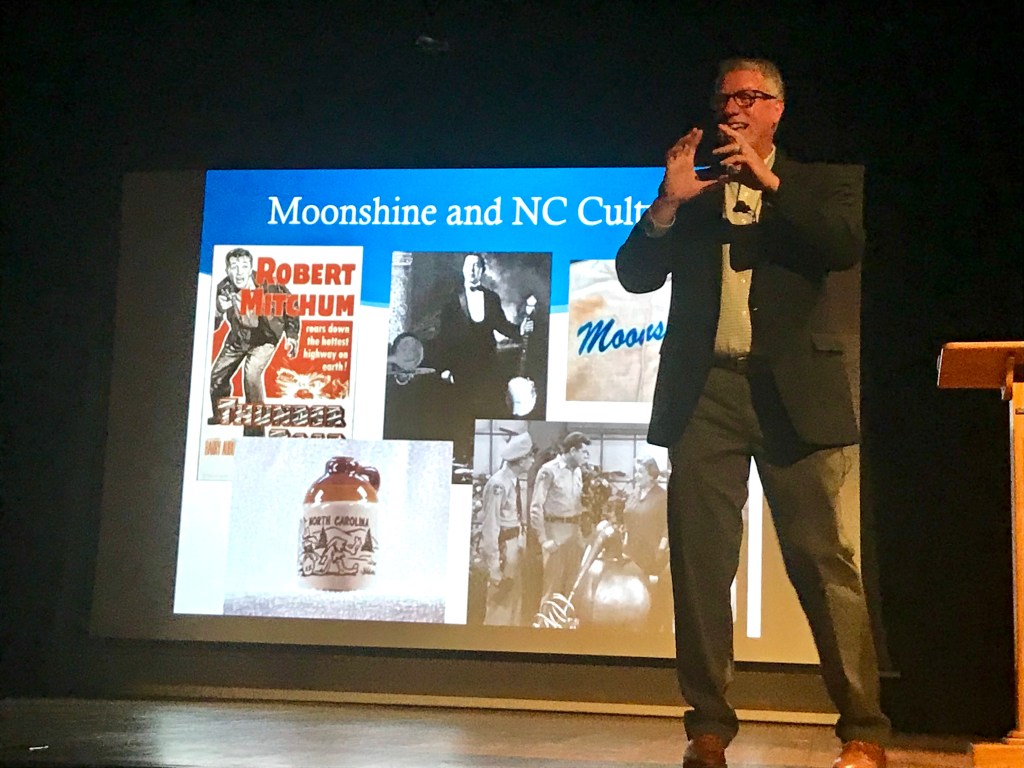 Dr. Daniel Pierce, history professor at UNC-Asheville, spoke to the crowd Tuesday night about the history of moonshine in North Carolina.

Though North Carolina is nationally known for many things, including barbecue and college basketball, during a presentation last week UNC-Asheville history professor Dr. Daniel Pierce mentioned something else the state is famous — or possibly infamous — for: the illegal production of liquor, or moonshine.

He joked that instead of “First in Flight,” the state should produce license plates that read “First in Moonshine.”

Roughly 160 people came to the Albemarle Neighborhood Theatre to hear Pierce speak about the history of moonshine in the state. The event was part of the Stanly County Historical Society monthly program series. In keeping with the night’s theme, people enjoyed apple pie moonshine before the event. 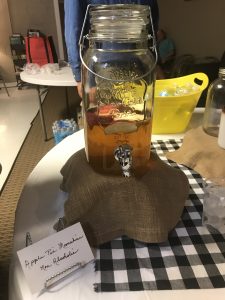 Apple pie moonshine was offered as a tasty (and relevant) treat before the program.

Pierce recently wrote “Tarheel Lightnin’: How Secret Stills and Fast Cars Made North Carolina the Moonshine Capital of the World” about the state’s history with moonshine.

According to data from the Bureau of Alcohol, Tobacco, Firearms and Explosives (ATF) dating from the 1860s to present day, Pierce said N.C. has consistently ranked at or near the top for distilleries busted and people arrested for moonshine.

The origins of moonshine in the country date back to the late 18th century, when, due to an excise tax on liquor by the British, many colonists were forced to surreptitiously make the liquor “in the light of the moon, hence the term moonshine,” Pierce told the crowd.

The production of moonshine was also a key part of the income of N.C. plantations. Many of these distilleries in the state were actually operated by slaves, Pierce said.

In the midst of the Civil War, the country created the Revenue Act of 1862, which levied taxes on numerous items available for retail and consumption including liquor. This excise tax, along with the state’s approval in 1908 to prohibit the sale of alcoholic beverages, helped to make the creation of moonshine incredibly profitable in the Tarheel state.

Creating moonshine became a livelihood for many in the state. It was a way for people to continue to pay for their farm land, pay their taxes and provide for their families.

One of the more famous bootleggers was Union County native Jerry Rushing. He became well-known as a liquor delivery driver, often evading police in the 1950s and 1960s in his white 1958 Chrysler 300D, which he named “Traveller” after Robert E. Lee’s favorite horse of the same name.

“Jerry Rushing is the real Bo Duke,” Pierce said, referring to the character from the popular 1980s TV show “The Dukes of Hazzard,” adding that Rushing helped to “create the myth of moonshine” in the state.

When discussing the legendary bootleggers of the past, Pierce said an ATF agent once referred to them as being “like rocket scientists” because law enforcement often could not keep up with and catch them. Many of them would produce the liquor on other people’s property, including land owned by Billy Graham.

During the presentation, Pierce cleared up a few misconceptions typically associated with the creation of moonshine, namely that it was a male-dominated industry that mainly existed in the mountains. He said people produced moonshine all across the state and many were women. The original moonshiners in the state were actually free people of color — black people and Native Americans.

“This is something that is common across the state,” Pierce said about the production of moonshine. “It crosses gender lines, race lines…”

One of the more famous people associated with the industry was ATF agent Joe Carter, who was a native of Stanly County. He engaged in his fair share of car chases and even helped to catch Junior Johnson, who served about 10 months in federal penitentiary.

Pierce read an excerpt from Carter’s book, “Damn the Allegators,” about an embarrassing episode in his life. He was chasing a moonshiner in Wilkes County when, after a 30-minute game of cat-and-mouse, the moonshiner actually turned onto Carter’s side of the road and the two engaged in a short game of chicken, before Carter got off the road and landed in a large embankment. 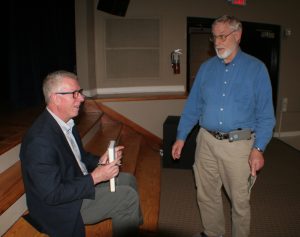 Moonshine is probably most associated with stock car racing, with Pierce saying many car owners were big-time bootleggers and many of the original early race tracks were built by bootleggers. Car mechanics made a profitable living working on liquor delivery cars.

Many of the early race car drivers, like Johnson, all likely hauled liquor at some point during their career.

“At every level of the sport, you had the involvement of illegal liquor,” he said.

Pierce emphasized how moonshine has permeated the popular culture in the state over the years. It has been featured in popular TV shows such as “The Andy Griffith Show” and “Moonshiners” on the Discovery Channel and in films such as “Thunder Road” starring Robert Mitchum. It has also appeared in popular music, including the 1928 Bascom Lamar Lunsford song “Good Old Mountain Dew” and the 1967 song “Rocky Top.”

Pierce mentioned that an Asheville semi-professional baseball team in the 1890s was known as the Moonshiners.

Since around 2000, many people in the state have opened distilleries and are legally producing moonshine. Pierce said there are probably at least 20 or 25 distilleries across the state, including Southern Grace Distilleries in Mount Pleasant.

“So anyway, it’s (moonshine) still very much with us today,” Pierce said.