“It’s overwhelming,” Ellis said. “I didn’t think this was possible.” 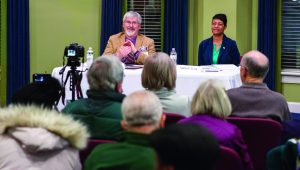 Ellis grew up in an East Spencer home that was passionate about politics, and got a passion for it at a young age from her late mother, who volunteered at the polls. She also helped neighbors register to vote at her kitchen table.

“They want a change,” Ellis said. “I want to deliver change.”

Campaigning was a great experience, Ellis said, adding that she was encouraged to see the enthusiasm about her candidacy as she spoke to voters. Ellis said she heard what voters had to say and was real, honest and open with voters.

Ellis will take on Sen. Carl Ford, a Republican incumbent, in the general election. Ford did not face a Republican primary challenger.

Before that, she said her first step is to rest and then get back to the campaign trail.

“That is going to be a long haul,” Ellis said. “I want to make sure I have the right strategy in place. I do want to win.”

Meanwhile, Hoy campaigned on the motto “Hope, Opportunity, Yes!,” making an acronym of his last name.

Hoy said “hope” came from challenges he experienced as a child when his home burned down and his family separated. “Opportunity” was rooting in taking advantage of what his life has offered. Hoy said he stood for health care, education, economic development and an open legislative process.

He congratulated Ellis on her win Tuesday and said he looks forward to meeting with her to discuss next steps and Ford’s “retirement” from the N.C. Senate. As chair of the county party, Hoy said he will work to help Democrats win.

Throughout the campaign, Ellis and Hoy remained cordial and said they would support the other no matter who won the race. They saw the Democratic primary as a way to bring attention to the party.

Hoy and Ellis filed the last day of the filing period on Dec. 20, 2019. Hoy, the county chairman, was tasked by the state party and Gov. Roy Cooper with finding a challenger to Ford. In Stanly County, Democratic Party county chairman Kevin Taylor was tasked with the same and encouraged Ellis to run.

Liz Moomey is a reporter for The Salisbury Post.