Court case continued to May 11

Maximiliano Anguiano, who was indicted in July 2019 and charged with first-degree statutory rape, indecent liberties with a child and crimes against nature, has a Superior Court date of May 11, according to the district attorney’s office. He was arrested in June 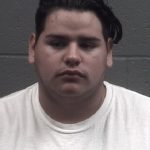 of last year by the Stanly County Sheriff’s Office.

His case was continued on Feb. 17.