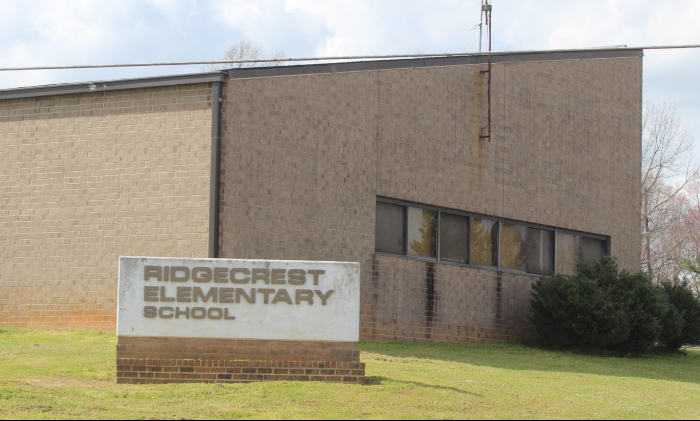 Ridgecrest Elementary School closed in 2012. The possibility of reopening the school has been discussed recently as a way to help alleviate nearby elementary schools that may be over capacity by 2021-22.

The event was organized by Curtis Furr, who lives a few miles from the school, which was closed in 2012. About 30 to 40 people showed up, Furr said.

“The school’s been closed for several years and we want to get it back open,” Furr said. “I’ve just kind of pushed everybody that we need to get it open.”

Furr said the community seemed “like it kind of fell apart when they took the school and closed it.”

The idea of looking into possibly reopening the school has been brought up during recent school board meetings due to the passing of House Bill 90 in 2018 which requires a gradual reduction in class size for grades K-3 over the next few years.

Last school year the average K-3 class size allowed under HB 90 was an average of 20 students, according to information from the North Carolina Association of School Administrators. It dropped to an average of 19 students for the current school year. It’s scheduled to drop to a maximum of 16 to 18 students in a class, depending on the grade level, for the 2021-22 school year.

Stanly County Schools Superintendent Dr. Jeff James said it is not good for schools to have capacity above 90 percent, though many of the elementary schools already meet or exceed that standard and the ones that don’t likely will in 2021-22, according to data posted on school system’s website. Millingport Elementary, for example, projects to be at around 163 percent capacity for 2021-22, while Endy Elementary projects to be at 104 percent.

There is an incentive to try and meet the size requirements. The state will fully fund art, music and physical education teachers for each school that complies with the class size mandates by 2021-22. The county currently does not have enough local funding to supply each elementary school with full-time AMP instructors, James said.

During the February school board meeting, James mentioned the school system stands to gain 33 additional teachers if it can comply with the new class sizes.

If Ridgecrest, which has 21 classrooms, did reopen it wouldn’t be until 2022-2023 and it would likely be an intermediate school for grades 5 and 6, James said. Another option if the school reopens is that it could house a magnet program. It would take around $1.2 million to reopen Ridgecrest, including between $300,000 and $400,000 for updating technology to match that of other schools, which can be paid for with federal E-Rate funding. No decisions will be made since the school system is currently gathering information as part of its exploratory phase, James said.

Another potential option to alleviate school capacity would be to increase the number of mobile or modular units at the schools, but James said they are costly and would act as only temporary solutions.

A list of questions from the meeting are posted on the school system’s website along with answers provided by district leadership.

James was to meet Friday with the principals at West Stanly Middle, Locust, Millingport and Endy to discuss class size options. He plans to also meet with local parents to present class size options and to solicit input and feedback. In total, he anticipates anywhere from five to 10 more meetings before anything concrete happens. James would like to have a school board vote about reopening the school by the end of May.

The ultimate goal for SCS is to “help provide an option with the least amount of impact to students,” James said. He added that the school system wants to make a decision that will have a lasting benefit and not one that would have to be revised after a few years.