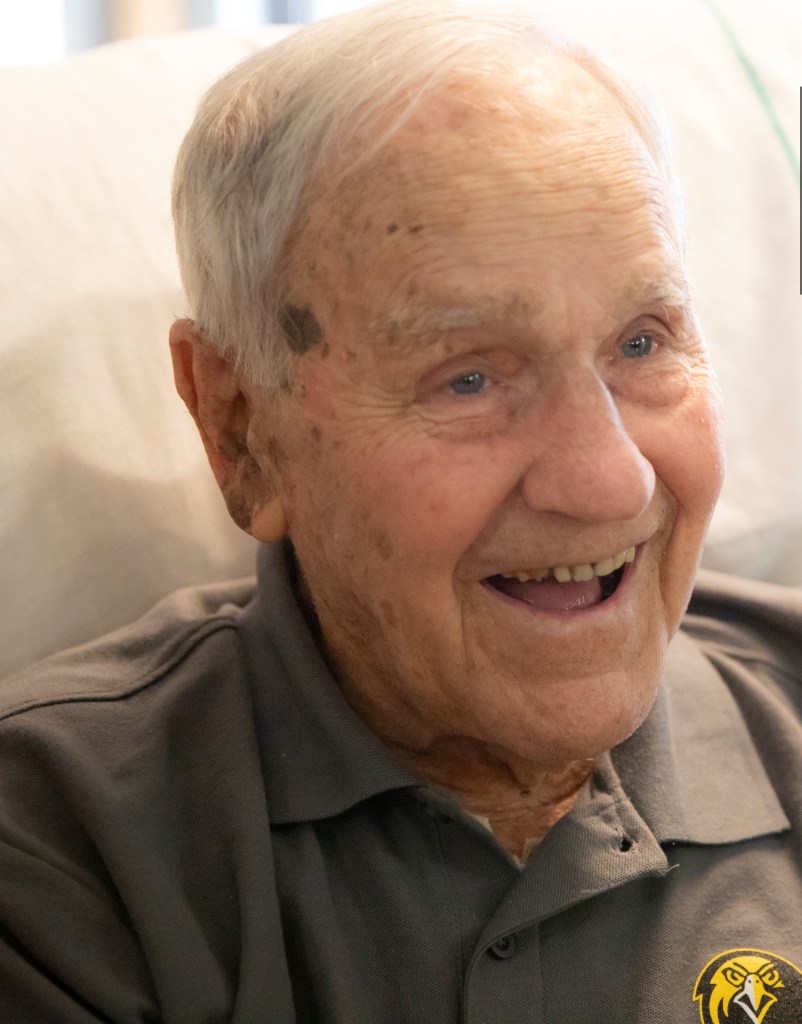 Joe Ferebee, a Mocksville native who became one of the giants of Rowan County and Stanly County athletics, passed away on Wednesday.

He’s a “Mount Rushmore” sports icon for both counties, a charter member of the Salisbury-Rowan County Hall of Fame, an all-time legend who positively impacted thousands of sailors and ball players. Decade after decade, he molded boys into men.

He coached American Legion baseball state championship teams at Newman Park from the 1950s to the 1980s.

He coached 694 American Legion wins, 667 collegiate wins at Pfeiffer and added 77 more wins at Salisbury’s Boyden High, where his team won the 1955 3A state championship. That’s a total of 1,438 wins. While his Legion victory total was surpassed in 2015, he is still recognized as the winningest baseball coach in North Carolina history. His teams won 67 percent of the time.

“I had the distinct honor of playing for Coach Ferebee for three years of Legion ball,” said Carson head coach Chris Cauble, the catcher on Ferebee’s 1984 Rowan County American Legion state champs. “There was just so much knowledge to be gained by listening to him. When he was talking baseball, he always found a way to tie baseball in with life.”

Ferebee was a senior at Catawba College during the 1941-42 school year, a strong-armed right fielder who also suited up for the football and basketball teams.

His life changed, as did the lives of most members of his generation, when Pearl Harbor was attacked on Dec. 7, 1941, and plunged the United States into World War II.

Within a month of Pearl Harbor, Ferebee had enlisted for military service.

He was an “A” student, so he was allowed to take his exams and graduate early. He asked to pitch a game for Catawba baseball in April 1942, before he left to join the war effort. He threw a shutout against Western Carolina.

Not long after that, Ferebee was in a bunk in the Norfolk Naval Training Station. He became part of former heavyweight champ Gene Tunney’s specialist training course made up of elite athletes, many of them pros. The idea was that athletes and coaches were natural leaders and would make excellent officers. Tunney interviewed Ferebee personally.

Ferebee’s next stop was San Diego. He made the cross-country trip from Virginia in a Chevy coupe. He always swore it was 118 degrees when he rode through Texas. He also said he caught a Texas jackrabbit and held onto it for 150 miles before turning it loose at the town square in Tuscon, Ariz.

The jackrabbit adventure would be Ferebee’s last fling with fun before the war was won. From San Diego, he headed to the Farragut Naval Training Station near Coeur d’ Alene, Idaho, and that was serious business.

In Idaho, he drilled and trained and taught sailors. His classes consisted of 160 men. He had no assistant.

Those classes lasted eight to 12 weeks, depending on how desperate the Navy’s need was for replacements. When those sailors graduated from Ferebee’s class, they were ready for whatever came their way. They were experts in fire control, seamanship and lifeboat skills.

There were long days when Ferebee graduated one class at 5 a.m. and welcomed 160 new recruits 13 hours later.

Ferebee always was prouder of what he accomplished with those Naval classes than with anything he did on a baseball field.

But it was on ball fields that he became legendary. He was a master of teaching fundamentals.

Ferebee began his coaching career at Salisbury’s Boyden High in 1947. The first Legion team he coached was Spencer in 1949. He started coaching Salisbury — this was long before the program was consolidated into Rowan County — in 1950.

A tiny, but rocket-armed lefty, Tom Eaton, became a superstar for Ferebee. He was the workhorse for Boyden’s 1955 NCHSAA champions and for Ferebee’s 1955 Salisbury Legion squad that captured the imagination of fans with a string of titles and a trip to the World Series in Minnesota. Much of the amazing fan base that Rowan County Legion still enjoys today can trace its roots to the run by Ferebee’s 1955 squad. Eaton set records for wins and strikeouts that still stand.

“Coach Ferebee always was a great teacher,” Eaton said. “Every team works on hitting, pitching and fielding, but we worked on important things that other teams didn’t spend as much time on — cutoff plays, backing up throws, throwing to the right base. Little things like that could make a big difference, could turn a key game around. He even taught us how to properly wear our uniforms, our hats and our socks.”

Ferebee stayed at it a very long time. He loved the game.

“I don’t think I ever saw anyone who was as crazy about anything as Coach Ferebee was about baseball,” Eaton said. “He’d be out there mowing the grass and lining off the field in the morning before a night game, and loving every minute he was on the field.”

While he cherished baseball, Ferebee brought some of that military discipline to it. He was tough. He was strict.

His players wore their uniforms with military precision. Players always stood at attention until the last note of pre-game national anthems.

“I don’t know how many of today’s players could play for him,” Cauble said. “I remember a Legion tryout day. He told a few stories. Then he asked who had a summer vacation planned. Three or four guys put their hands up. Coach told them they were cut. Just like that.”

Ferebee coached the Albemarle Legion squad in 1957. There was a memorable playoff win against a powerhouse Kannapolis team.

Cauble, who has become the all-time leader for high school baseball wins in Rowan County with 384, credits Ferebee with providing the foundation for his success.

“I remember as a young player, I knew I was going to be the backup catcher (behind Tony Myers) for the Legion team, and I asked Coach Ferebee about going and playing Pony League where I’d be playing all the time. He told me to stick around with the Legion team, that if I paid attention I’d learn a lot not only from him but from Tony Myers because the older players would teach the young players. I stayed, and Coach was right. I learned a lot that summer.”

After Cauble became a starter, he asked a lot of questions. He’d been a No. 3 hitter in high school at East Rowan, but Ferebee had him leading off. He wondered about that.

“He told me that over the course of the season it was going to mean a lot more at-bats for me, and he wanted his better hitters to get as many at-bats as possible,” Cauble said. “That’s a philosophy I still use at Carson.”

Ferebee, who also served as Pfeiffer’s AD for many years, was a walking history book well into his 90s. His memory stayed razor-sharp. He could tell not just the score of games from the 1940s, but also who was on base and who was on the mound and what the count was when the decisive pitch was thrown.

He could provide virtual play-by-play of Rose Bowl games from long, long ago. His all-time favorite athlete was Don Hutson, the great receiver from Alabama and the Green Bay Packers, who was dominant in the pros from the mid-1930s to the mid-1940s.

Just about everyone Ferebee ever coached agreed on one thing — that he was the best and most knowledgeable coach they’d ever been around.

As long-time reporter Chris Hobbs said via social media on Wednesday night, “If you followed baseball at any level in North Carolina, and had a chance to see Coach Joe’s teams play, value the memory. He helped put going to a college baseball game on many people’s lifetime bucket list.”

While Ferebee’s success with Rowan County American Legion was monumental, his college success at Pfeiffer matched it. He coached Pfeiffer teams from 1956-1987 with a success rate that mirrored his American Legion percentages.

“No one in the history of Pfeiffer University athletics has influenced the lives of more young people than Coach Ferebee,” said Jack Ingram, a Pfeiffer student-athlete during Ferebee’s tenure. “He instinctively knew how to bring out the best in his players, who respected him and rose to the challenges of the game under his guidance.”

Ferebee tributes poured in all day on Thursday.

“He was my friend, my coach and teacher and most of all, my hero,” said former Pfeiffer player Bob Gulledge, who was the lead organizer of Ferebee’s recent birthday gatherings, including his 100th last year. “I didn’t realize all those ground balls he hit to me were teaching me about life, but the older I got, the smarter he got. We loved him and will miss him. He was a great man.”

Duke head baseball coach Chris Pollard, who was mentored by Ferebee at Pfeiffer, called Ferebee “a larger-than-life figure in our sport.”

“You think about his service to our country and you think about the 1,400-plus wins, the multiple halls of fame,” Pollard said. “When I got to Pfeiffer, I was a first-time head coach, 24 years old. He was a legend. In the time since, that legend has only grown.”

Duke assistant Dusty Blake, who also coached at Pfeiffer, stated that Ferebee “set the bar for all collegiate coaches when it comes to making a positive and lifelong impact on student-athletes.”

Pfeiffer baseball games are played at Joe Ferebee Field — “The Joe.” His No. 23 jersey is retired.

In 1969 and 1971, Ferebee received the Governor’s Award for his contributions to youth baseball.

The coach was married to Melba Willis Ferebee from 1952 until her death in 2004. He is survived by four children, all Pfeiffer alumni — Joe Jr., Mark, Rick and Jomelle Ferebee Key.

A small private family service is planned, with a larger memorial service to be announced at a later date.

Mike London is a sports reporter with The Salisbury Post. Email him at mike.london@salisburypost.com.