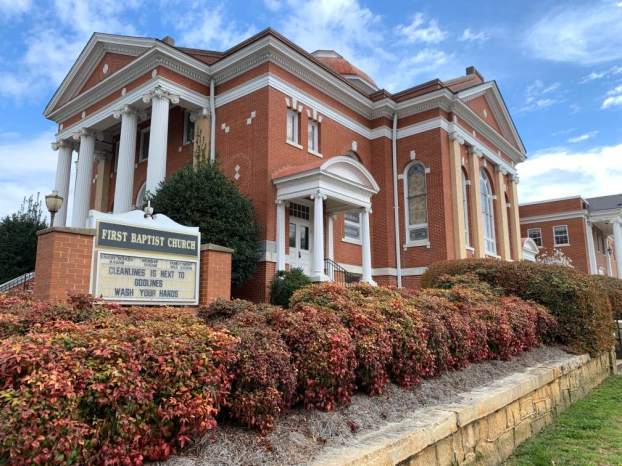 As the coronavirus is shutting down much of America, many people are sheltered in their homes, adjusting to more isolated lives with minimal contact with others. While many segments of society are having to deal with this new way of life, few have been as impacted as churches.

Sacrifices are being made to prevent the spread of a virus that has infected more than 12,000 Americans, including more than 100 in N.C., and killed almost 200 people as of Friday morning.

Churches across the country, including those in Stanly, are still tinkering with ways to bring people together — without having them get in direct contact with each other.

David Talbert, pastor at Salem United Methodist Church in Albemarle, is experimenting with an idea he and his wife Tammy, a pastor at Macedonia United Methodist in Southmont, thought of initially as a joke earlier in the week: Conducting drive-through services.

After getting support of his idea from the Stanly County Health Department, both Talberts plan to implement the idea at their respective churches Sunday. David said the service, which will last around 40 minutes and begin at 10 a.m., will be behind Salem UMC. He said the area behind the church can handle up to 70 cars and additional services could be performed if the demand is great enough.

“I just think it’s powerful for people to be able to be in community and do something together,” he said.

Like Salem, many other churches are also having to adjust their operations. First Baptist Church in Albemarle is one of them.

First Baptist has canceled worship services, relying instead on Facebook Live services conducted by Senior Pastor Ryan Clore and a few others each Sunday in the sanctuary. This will continue each Sunday for the foreseeable future, he said.

“It will be the new normal,” Clore said.

First Baptist is also working on other ideas for people to feel less alone and isolated. Clore is working to create video conferencing several times a week, thanks to the technical tool Zoom, where congregants can communicate and conduct Bible study each Wednesday. People can check out Zoom tutorials on Youtube.

“People can be with each other in a video conference setting,” Clore said.

Clore is also working on assembling a grocery team, comprised of younger congregants who will deliver food to the elderly and those with underlying health conditions — the ones doctors say are most susceptible to the coronavirus. He also wants to create a buddy system where each congregant older than 65 will be connected with a congregant under 65 so they can check in and make sure no person is feeling forgotten.

Clore has a blog on the church’s website that will keep people abreast about the latest information.

Mission Baptist Church in Locust, which averages more than 200 people at both of its Sunday services, knew it was unable to continue regular services after Gov. Roy Cooper’s executive order against gatherings of 100 or more people.

“That pretty much shut us down,” Pastor Jeremy Hyde said.

The church is also working on a prayer line where concerned congregants can speak to volunteers, who will pray or chat with them. Hyde also mentioned Mission Baptist is pairing each senior congregant with a church family, who will check in and make sure they are okay.

“The whole thing has just been surreal,” Hyde said about how quickly the virus has impacted society. “I’ve never seen or experienced anything like this.”

Central United Methodist Church in Albemarle canceled its service last Sunday and Gary Moran, assistant to the pastor, said that will likely continue going forward. The church is looking at creating regular online services each Sunday.

“Like many other churches, we have a predominately older congregation and we have to protect those folks,” Moran said. 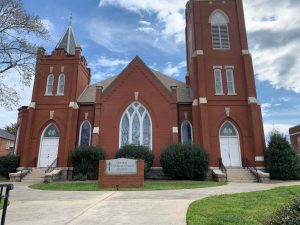 Following the recommendations of the Rev. Tim Smith, Bishop of the N.C. Synod, ELCA, First Lutheran Church in Albemarle has canceled all gathering activities.

“I didn’t like it at a all,” said Pastor James Laurence. “It was hard for everyone.”

The church is working to hold Sunday services online, though “it’s a challenge because we haven’t been doing that,” said Laurence, who regularly posts sermons on his blog (mypasterolponderings.com).

In addition to going digital, the church is preparing prayer booklets congregants can pick up at the church. It has been updating its Facebook page with the latest information, including how to talk with children about the virus, Laurence said.

“I do trust that God brings good out of difficult times and hope that this deepens people’s walks with God,” he said. 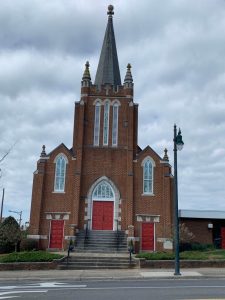 Though Mineral Springs Baptist Church in Oakboro had its service last Sunday, Pastor Kinney Wallace said the church will have to make “adjustments” in light of Trump’s recommendation against gatherings of 10 or more people.

In a Facebook post, Father Peter Fitzgibbons of Our Lady of the Annunciation Catholic Church in Albemarle said that “During this period of national stress, please know that the Church is open for all to come and pray before Our Lord in the Most Blessed Sacrament. Please use the side door.”

But not all churches have changed operations; some smaller churches are planning to continue as normal, for however long that may last.

Encounter Christ Church in Red Cross, where attendance can range from 50 to 100 people, is maintaining its current service schedule, while taking “comprehensive measures” to make sure the church remains safe for those who come to worship and while continuing to monitor the spread of the virus, said Pastor Alan DiDio.

Should the need arise to cancel services, DiDio said the church is well-equipped to conduct online services.

“We already have a robust online community that we stream live to every week on Facebook and YouTube and we will continue to do so especially if quarantined,” he said.

DiDio has also encouraged people who are susceptible to the virus and those presenting symptoms to stay home.

By Mike London Joe Ferebee, a Mocksville native who became one of the giants of Rowan County and Stanly County... read more