Parents, children work from home due to coronavirus 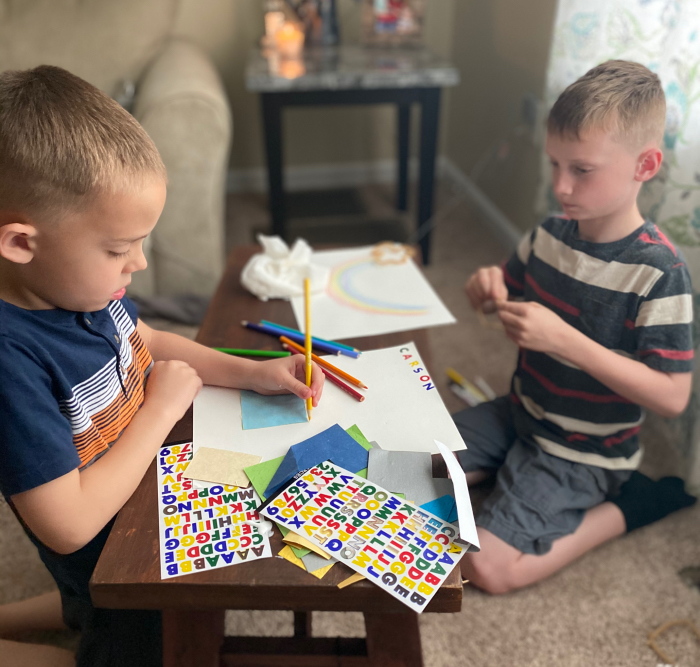 With Stanly County Schools closed through at least May 15, along with all K-12 schools in the state, under Gov. Roy Cooper’s executive order Monday, children find themselves at home with their parents or other caregivers.

Cooper’s previous order closed schools for two weeks. Though they are completing school assignments, there is still a lot of free time to fill — and many parents and their kids are working to best utilize that time.

“It’s been really good spending time with them,” said Cierrah Gregory about her two children, Sebastian and Carson, who live in Albemarle.

Gregory has been able to stay at home after her boss at Lowes informed her she qualified for two weeks of paid leave.

Aside from completing school packets, Sebastian and Carson, who attend Badin Elementary, have enjoyed spending time outside and working on art projects. Gregory said the time off has forced her to think outside the box in terms of unique ways to engage with her kids.

The family has spent time constructing bird feeders out of corn cobs covered with peanut butter and bird seed.

“They really loved that,” Gregory said.

They have also been coloring and walking around the neighborhood, “just trying to stay proactive without being on video games and TV” which, Gregory admits, is hard.

They have also enjoyed sleeping in and spending time away from school. Carson thought he had to go back when he first saw his bus outside, which forced him to go into hiding. Gregory had to tell him the bus was dropping off meals to children who needed them.

“I’ve been so blessed that my job has let me have this opportunity,” she said.

Sebastian, 9, has been helping his younger brother Carson, 6, with his schoolwork.

The key for parents is to think about the time with their children as “an unexpected opportunity for an adventurous staycation,” said licensed clinical mental health counselor Judith Chappell, who works at Monarch’s Certified Community Behavioral Health Clinic. “Our response to any situation is all about how we frame it.”

And the situation will likely not go away in coming weeks, with the cases rapidly increasing each day. There were almost 400 known coronavirus cases in North Carolina as of Tuesday morning and 43,500 total cases across the country. More than 530 people with the virus have died, though none in North Carolina.

Stanly County Schools believes its staff and students can navigate through this uncertain time.

“We feel as about as prepared as possible,” Superintendent Dr. Jeff James said. “Our teachers are resilient and have persevered through this uncharted water we are in. We want to continue to support our students and have made plans to do so past the original two weeks.”

Bibi Murray, a long-term substitute at Central Elementary, has been at home with her two sons, Andrew, who attends Albemarle Middle, and Andre, who attends East Albemarle Elementary. When not working on school assignments, the kids play video games and talk to friends on the phone.

They also take time to go outside. Andrew takes a daily lap around the house while Andre enjoys riding his bike.

Andrew, an honor roll student, has been sticking to the same schedule he has at Albemarle Middle, in terms of working on class assignments.

“He’s very particular,” Murray said about adhering to a routine.

He’s also been completing his work largely on his own while also helping Andre with any problems he may have.

Murray refers to the time she now has with her kids as a “learning experience” because she gets to witness them completing work that usually occurs inside the classroom.

She is available if either of her sons need her help. She says it’s crucial during this time that children know their parents are around to help them if they are struggling.

“Parents have to be active,” Murray said. “If they’re not active, kids will get lost.” 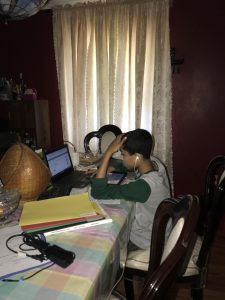 Laura McLeod had a full house last week, with three of her children home from college (though one just left) along with her two youngest — a Gray Stone Day School freshman and a fourth-grader at Endy Elementary. She said the family, along with her husband Mike, hadn’t been together in the same house since Christmas.

As a parent, she said she’s torn because while she enjoys having her children home, she knows they would rather be back on campus or at school with their friends.

“The selfish part of me is a little bit happy that they’re here, but they need to be with their friends and with their classmates,” she said.

She makes a point to get her children to go outside to walk or play basketball. Her son Andy, who is involved in track at Gray Stone, has been running at the school’s track in the afternoon after he’s done with his daily school work.

Ashley Burleson, who lives in New London, is thankful for the time she has been able to spend with her three children — Georgia and Michael, who attend Gray Stone, and Matthew, who attends Richfield Elementary.

“It’s definitely been a good time to slow down and have some time together that we didn’t before,” she said.

Many parents have also used the time together to talk to their kids about what’s going on around the country and world without scaring them.

Gregory sticks with the basics, telling her kids to wash their hands and that working from home is only temporary and eventually they will return to school.

“This is just a season in our lives,” she said she told her kids.

McLeod’s husband is a doctor at Atrium Health Troy Medical Services. They have been upfront with their children, especially 10-year-old Leo, about the virus.

During a recent walk, McLeod asked Leo if the coronavirus scared him and he told her no.

“He has not displayed any anxiety about it and I think it’s just because we’re upfront and honest about it,” she said. “If he asks questions, we give him the answers.”

Chappell said parents should be mindful to talk to their children in an “age-appropriate manner,” saying “you would not tell your 7-year-old the same thing you would say to your teenager.”

The Centers for Disease Control and Prevention recommends parents “remain calm and assuring” while talking to their children about the virus, along with avoiding language that “might blame others or lead to stigma.” They should also remind children to regularly wash their hands and stay away from people who are coughing, sneezing or are sick.

Eventually the honeymoon phase of staying home will go away and Gregory likely speaks for most parents when she says: “I feel like they are going to miss school by the end of this. They’re going to be ready to go back.”