A trailblazer in Stanly County as being the first police officer to spend the majority of his time on the job in the county’s public school system passed away Friday of brain cancer.

Mike Martin, a native of Covington, La., and an Air Force veteran, served for 26 years with the Albemarle Police Department before retirement. He served as a school resource officer (SRO) in the Albemarle schools for the majority of his career. 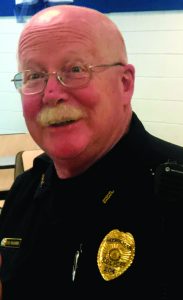 Albemarle Mayor Ronnie Michael, who worked for many years with APD, retiring as police chief, said Martin had chances to be promoted, like being back on the road or in charge of a shift. However, Martin chose to stay in the school system.

“He was very much involved with the students at all of the schools,” Michael said, noting Martin spent the majority of his career as a resource officer. He started at the elementary level and moved up to Albemarle High School.

The mayor said Martin truly found his calling when he moved on to the high school.

“He set an example for all of our school resource officer…he was there for the students. (Students) did not mind talking to him,” Michael said.

Elbert Branch, who took over for Martin at the high school as SRO, said Martin was his supervisor and his friend.

“(He was) a great leader (and an) even better person. He touched a lot of young lives. He helped those in need, volunteered his time and services to various organizations and community events,” Branch said. “Mike was the type of person who could take a not-so-good situation and turn it into an eventful one full of laughter.”

He said he had a lot of fond memories of Martin, both at work and social gatherings.

Kesha Branch, a teacher assistant at Albemarle, spoke on Facebook about the lunches the group often shared, bringing in food. Martin had a flair for Louisiana cooking, Branch said.

Brenda Watson, another coworker, said she had good memories of Martin.

“He loved his job. He loved to cook and hang out with his coworkers. He will be missed by the AHS family,” Watson said.

“He never sugar-coated everything. He was a firearms instructor who always was willing to help me,” Cook said. “I had big shoes to fill.”

“He would text and ask me if I wanted (to work) Saturday on the Hill. I would say yes and his reply was, ‘You’re my hero.’ Little did Martin know he was mine. What I wouldn’t give to hear him say that one more time,” Cook said.