Residents file for unemployment due to coronavirus

Last week, Gov. Roy Cooper ordered all restaurants and bars to close, except for delivery and takeout, in light of the continuing spread of the coronavirus.

On Monday, Cooper ordered all schools to be closed until May 15, banned gatherings of at least 50 people and closed businesses such as gyms, hair salons, barber shops, tattoo parlors and movie theaters. Stanly County YMCA and Planet Fitness already closed last week. Many state parks, including Morrow Mountain, are also closed.

Cooper’s announcement comes as the number of coronavirus cases in North Carolina has risen to more than 700 as of Friday with three people having died. Stanly has had two positive cases.

The shuttering of local businesses, even if only temporarily, has resulted in many people getting laid off and having to file for unemployment. Harmanco’s in Albemarle, for example, had to lay off 24 employees last week, many of them servers and bartenders.

“We know people want to work and that businesses want to stay open,” Cooper said in a news conference last week. “The reality is that many can’t.”

The NCWorks Career Center in Albemarle has already been flooded with calls from laid off employees. Last Friday, the center received 167 phone calls and Gus Vanegas, head of the career center, says he expects as many daily calls if not more this week.

“I can tell you we are swamped with all these people calling about claims for unemployment and trying to file for unemployment,” Vanegas said, adding the online system crashed a few times last week because so many people were applying. 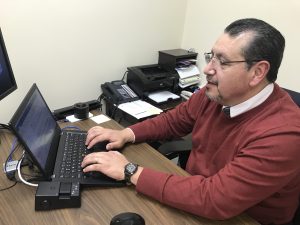 Stanly County Schools, which is the largest employer in the county, has not laid off any full-time employees, according to Superintendent Dr. Jeff James.

One way hourly school employees such as bus drivers have been able to continue getting paid is through the school system providing free meals each weekday to students via regular bus routes. SCS has delivered almost 54,000 meals since March 16.

At this point, Vanegas does not have any data for Stanly unemployment over the past week.

Vanegas is working to strike the right balance between trying to help the people contacting the center while also looking after his staff and making sure they are doing well.

He said people who need to file an unemployment claim can do so online at www.des.nc.gov or over the phone at 888-737-0259. They will need their social security number, bank routing and account numbers and details about their work history.

Eligibility requirements include people must be unemployed through no fault of their own and have earned substantial wages (at least $6,000) during the previous year and a half to establish a claim. After about 10 days, people will receive a letter in the mail, detailing how much money they will receive each week. The maximum amount per week is $350. People will receive money for up to 12 weeks, Vanegas said.

During his news conference announcing the executive order, Cooper eased restrictions on state unemployment benefits in a move to help workers and businesses affected by the coronavirus. These include an elimination of the waiting period to apply and of the requirement that recipients be actively looking for jobs to obtain the benefits. Also workers who see fewer hours but don’t lose their jobs completely can qualify in some cases.

If the virus continues to spread and businesses remain closed for longer than three months, Vanegas is not sure what will happen in terms of people receiving money.

The N.C. Commerce Department last Thursday reported 281,000 new claims for the week of March 14, a 30 percent increase from the previous week, and the most since Sept. 2 2017.

“They are not alone,” Vanegas said of the many people in the county applying for unemployment. “Just do your best, just stay strong and listen to the authorities.”