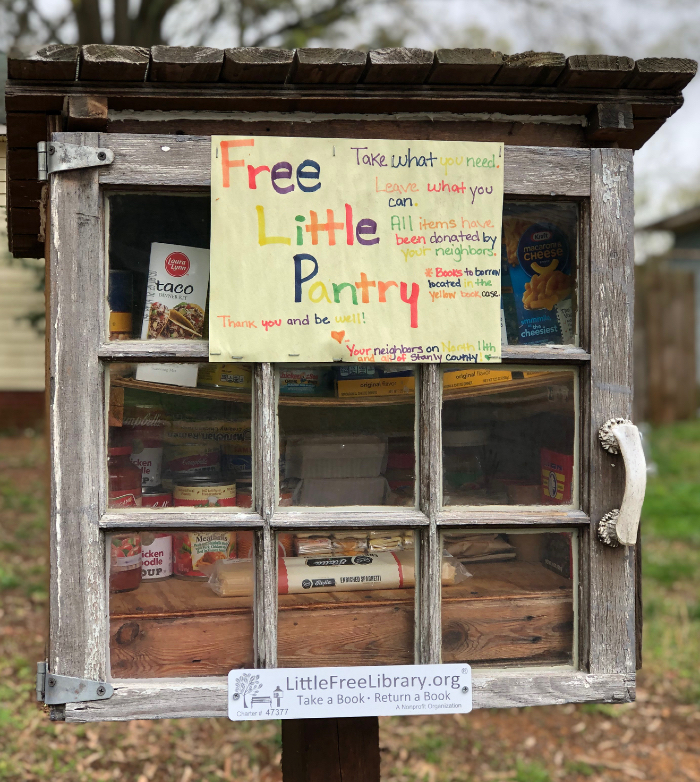 Albemarle resident Morghan Eckenfels recently created a free food pantry to help those who might be running low with food during the coronavirus outbreak. (Photo courtesy of Morghan Eckenfels)

Wanting to help those impacted by the coronavirus outbreak, a woman created her own food pantry at her house on Eleventh Street in Albemarle.

Morghan Eckenfels reconfigured her small library book-sharing box in her front yard into a food pantry for people to donate and pick up supplies. People can take any items they desire from the box free of charge.

“It’s kind of a movement,” she said about people opening their own customized food pantries.

She initially donated a few items of her own and then her neighbors chipped in. The movement started to take off when she posted about it on Facebook.

She’s gotten so many donations that sometimes the pantry has been overflowing with items. Eckenfels had to take some items inside her house to place back in the pantry at a later time.

Common supplies have included non-perishable canned goods, like pasta sauce, along with macaroni and cheese, granola bars and peanut butter. One person recently donated a Lowe’s gift card so she could build a bigger pantry while another donated a big bag of toilet paper. 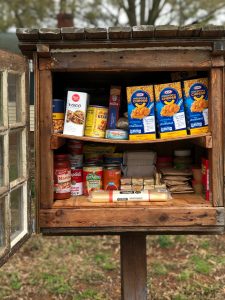 A colorful sign is attached to the door which reads: “Take what you need! Leave what you can. All items have been donated by your neighbors.”

The generosity she’s witnessed over the past week has really been moving.

“I think it’s amazing,” she said of the people donating items.

While people have been panicking and fighting over toilet paper, which she says can be discouraging, she said her project has reminded her “that the majority of people are good and care about each other.”

Craig Marsh, who lives in Montgomery County, made the 20-mile trek Thursday to the pantry to donate a bag of food including vienna sausage, salmon, crackers and tuna.

“It touched my heart,” Marsh said when he first heard about the project. Though it’s a small pantry, “the thought is there,” he said.

“I feel best when I’m helping others,” she said.