Thousands of North Carolinians could die due to coronavirus 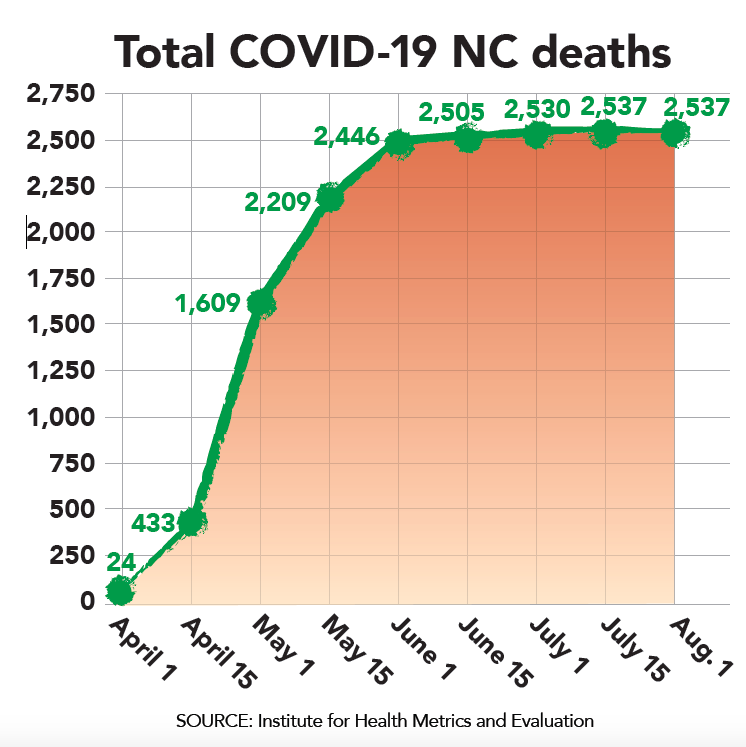 Total N.C. deaths due to Covid-19 could surpass 2,500 by early August, according to a forecast model by the University of Washington.

Health care data forecasters are projecting that North Carolina has only a few weeks before the state exhausts its resources and the worst of the Covid-19 pandemic occurs.

A forecast model created by the Institute for Health Metrics and Evaluation (IHME) projects the peak of the pandemic will be April 23 in North Carolina. By that date, the state would need 862 more beds, including 625 ICU beds, and 954 ventilators in order to meet capacity and help flatten the curve. The state currently has 7,125 beds, including 567 ICU beds.

(The projections included in this story were based on data released Tuesday. The Institute intends to update the projections regularly based on new information about the implementation of social distancing policies and death rates.)

In an interview with Atrium Health Stanly officials and doctors last week, they said the hospital had 109 licensed hospital beds, though only 62 could be utilized. The hospital has contingency plans in place to expand its bed capacity up to 40 percent during a time of emergency. They also had 10 ventilators.

As of 2018, the Charlotte area, including Stanly, had 4,870 total hospital beds, of which about 70 percent were occupied, potentially leaving only 1,470 beds open for additional patients, according to a national analysis of hospitals across the country by ProPublica in collaboration with the Harvard Global Health Institute. If 20 percent of those who are infected become hospitalized — and if the infections are spread over six months — the Charlotte area would need about twice as many hospital beds as it currently has, according to the analysis.

The state has almost 1,500 confirmed coronavirus cases with eight deaths as of Tuesday, according to the state Department of Health and Human Services. More than 23,000 tests have been conducted and 157 people are currently hospitalized due to the virus. There are currently five cases in Stanly County, though many more in neighboring counties — Mecklenburg leads the state with 420 while Cabarrus has 47, Union has 41 and Rowan has 23.

North Carolina is also projected to gradually increase in the number of deaths per day until it hits its peak, 80 deaths, on April 23. The IHME model, which runs through early August, predicts approximately 2,537 North Carolinians will die by Aug. 4. Estimates for the total number of dead ranges from as low as 1,287 to as high as 5,054.

IHME is an independent global health research center at the University of Washington. The center’s models have also been cited by the White House, according to information from CNN.

Nearby states have different peaks dates — South Carolina’s and Tennessee’s is projected to be April 26, while Virginia’s is May 28.

New York’s peak is projected to be April 9 and the state is still in critical need of thousands of supplies. According to the model, it needs roughly 60,000 more hospital beds, including 10,600 ICU beds, and more than 9,000 ventilators.

Though the projections assume “the continuation of strong social distancing measures and other protective measures,” these numbers are not set in stone; there is still a chance the state can obtain the necessary supplies and have a lower death count than what the data projects.

“This study used data on confirmed COVID-19 deaths by day from WHO websites and local and national governments; data on hospital capacity and utilization for U.S. states; and observed COVID-19 utilization data from select locations to develop a statistical model forecasting deaths and hospital utilization against capacity by state for the U.S. over the next four months,” according to Dr. Christopher Murray, director of the Institute for Health Metrics and Evaluation (IHME) at the University of Washington’s School of Medicine.

Murray writes that in addition to a large number of deaths from the virus, “the epidemic in the U.S. will place a load well beyond the current capacity of hospitals to manage, especially for ICU care.”