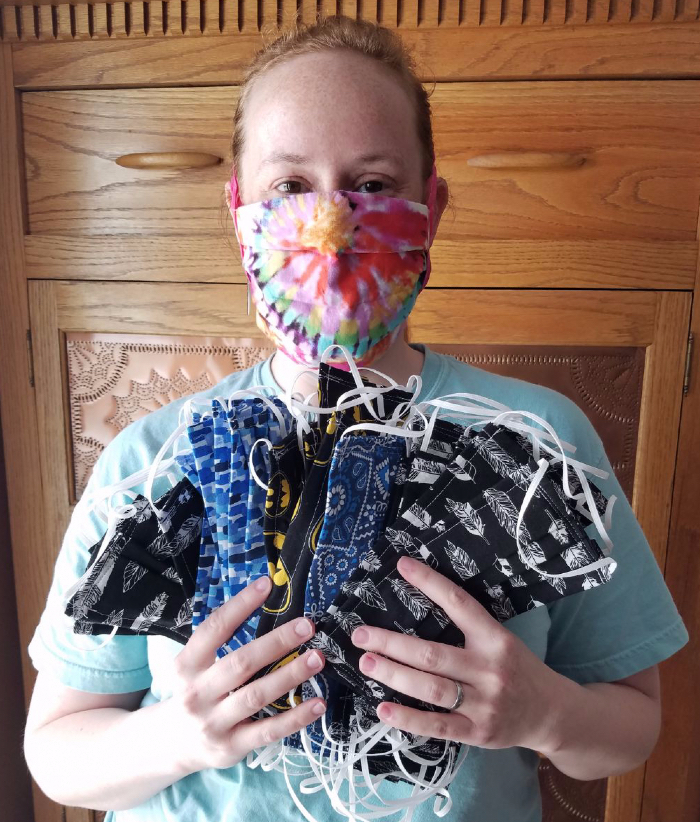 Tommy Jordan can’t sew. But he knows how to organize and, as a county commissioner, he has many contacts in the area.

He has been utilizing his particular strengths to organize a team of women who are creating facial masks to give to groups and organizations in the county during a time when masks are in short supply in many parts of the country.

After receiving a few messages from local seamstresses wanting to help, Jordan decided to utilize his large Facebook following and knowledge as a commissioner to coordinate a mask task force.

The force became operational after he talked with Superintendent Dr. Jeff James, who asked if he could help supply the school system with 250 masks to help with its efforts to feed students. Jordan and N.C. Rep. Wayne Sasser (R-Stanly) had previously given SCS hand sanitizer.

He created a Facebook message group and started a conference call where people were assigned responsibilities. While several of the women are responsible for constructing the masks, others work to procure materials, cut cloth and deliver supplies. Jordan is the go-between. He collects donations, buys materials and helps deliver them to the seamstresses.

“So we started prioritizing tasks,” he said. “Those of us that can’t sew…will run and drop supplies off for those that can.”

The group has already made 250 facial masks. It has given more than 100 masks to SCS, 50 to the Stanly County Health Department and 20 to SCUSA. Several more batches are being delivered to local healthcare groups. The goal is to try and produce 100 masks each day, Jordan said.

“This helps relieve some fears of our front-line employees,” said James. 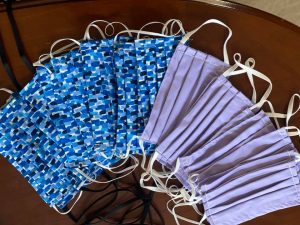 Each sewer is following instructions from Atrium Health about how to make the masks, which are made from 100 percent cotton, vary in size and color and are reusable. The masks can be washed each day and each come equipped with a filter pocket.

Within a few days, the small group of workers has quadrupled and there are now around 14 members, Jordan said. Though each comes with their own unique skill sets, they are finding ways to contribute.

Elaine Richards, 67, of Albemarle grew up sewing, though it had been 15 years since she had last used a sewing machine. In fact, her machine was so rusty Jordan helped her obtain a new one. While it took some initial patience to relearn how to sew and adjust to a new machine, she eventually settled into a groove. Richards works on masks each day and her daily goal is to produce 10 masks.

“It’s a tremendous feeling, but also I feel like it’s what we needed to do,” she said.

As someone who is older and has asthma, “I can’t get out there and help in many ways, but this is something that I can do safely from my home.”

Amanda Griffey of New London is spending about seven and a half hours a day at the desk, trying to produce at least 30 masks. She definitely has the time. She works at the Agri-Civic Center, which recently closed due to the pandemic. She calculated that she went through about 5,000 yards of thread during the past week. 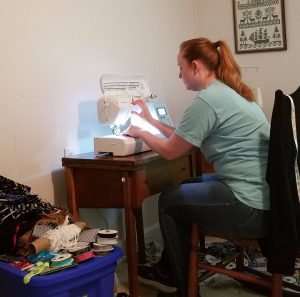 She donated some of her first masks to her family and friends, especially her mother, who is immunocompromised.

She says she definitely has a sense of purpose when she is sticking together the fabric because she knows the masks need to be distributed to the groups as soon as possible, especially those in the medical field. Even when she’s tired and has been working for many hours, “it’s like ‘Okay, let me just get these done because I know they’ve got to go out,’ ” she said.

Griffey, like so many other people around the country, is still adjusting to a new way of life.

“We’ve never gone through anything like this before, as a nation or even as a county,” she said. “And so I think everybody has to step up to the plate to say, ‘Okay, what can I do.’ ”

While the doctors and nurses on the front lines continue to put themselves at risk each day, “if I can put some cloth together with some elastic and it gives them some peace of mind, then it’s absolutely worth it,” she said.

Though Jordan was not initially familiar with the sewing process, he has learned during the past week.

“He told me the other day, ‘I’m learning more about fabric and sewing than I ever wanted to in my entire life,’ ” Griffey said.

Jordan encourages people to listen to state guidelines to stay home and be smart because the pandemic is not going away.

Stanly County currently has eight confirmed cases, including County Commission Chairman Matthew Swain. The state has 3,221 cases as of Tuesday, including 46 deaths and 354 people currently hospitalized, according to the state’s Department of Health and Human Services.

The leading age group most affected in the state have been those 25-49, who have accounted for 42 percent of the cases, according to DHHS data. Swain is 37.

“The world is not ready for this and the United States was definitely not ready for this,” Jordan said about the virus, adding that counties all around the country are in need of personal protective equipment, like facial masks.

He said people should prepare for the fact that the pandemic will get worse in the county.

But Jordan has enjoyed seeing people going out of their way to help. Whether it’s citizens donating money or time for mask production or to create hand sanitizer, or local stores donating fabrics or other supplies, Jordan is thankful that people continue to step up.

“It’s amazing to see what people can do,” he said.