You’re stuck home with your kids and feeling sorry for yourself. How are you going to keep them busy? What about their school work? I’ve got a better story — stuck at home with 16-year-old triplets. 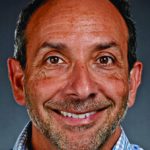 That’s what I thought.

Recently, as I was lamenting our collective plight I considered — as I always do — how I can use this situation to my advantage.

There are only so many indoor tasks you can ask of three, housebound 16-year-olds — get out of bed by noon, clean your rooms, put your dishes in the dishwasher. Actually, on a given day, I’d take any one of the three.

So, I went out and bought 22 bags of mulch and quickly morphed into a cross between Gunnery Sgt. Hartman from “Full Metal Jacket” and my father, minus the profanity.

When it came to spewing obscenities, my father could go toe-to-toe with Sarge.

I did, however, take a page from my father’s playbook as I attempted to motivate the triplets with cliches — “That mulch won’t spread itself you know.” “Let the rake do the work.”

I know I sounded just like my father, for whom I was a self-contained leaf and snow removal system. Oddly enough, as much as I loathed raking and shoveling when I was young, I actually enjoy it now. Still, when you have three able-bodied 16-year-olds (two girls and a boy) hanging around the house with nowhere to go, why should I risk throwing my back out?

What I didn’t account for was their work ethic and efficiency. They were finished in a couple of hours and we had nothing left for them to do.

It’s an odd thing, not being able to go places or even be around other people. It’s the right thing to do under the circumstances, but it’s still strange, although a minor inconvenience if it means keeping others from getting sick.

It is interesting to see how we adjust our schedules and adapt. I can say, without fear of contradiction, this is the longest I have gone in my life without watching sports on TV. I was so desperate the other day, I found myself watching a 30-year-old hockey game on YouTube. Not the entire game, as if that makes it better. About halfway through I had to come to grips with the reality that I have a problem.

For me, and I would imagine for many, this crisis has drawn a clear distinction between essential and non-essential. Situations we once would have considered intolerable we now tolerate.

For example, our Great Dane Bosco ate my very expensive and only pair glasses. He didn’t actually ingest them but he somehow got the lenses out, intact, and chewed off the tips of the frames, rendering them unwearable.

I ordered a new pair but in the intervening week, my optometrist closed up shop due to COVID-19. I was left with no choice but to pop the lenses back in and bend the frames so they’ll stay on my head, at least for a while. Sure, they look ridiculous, like I was in a bar fight and got hit in the face with a stool, but necessity compels in a crisis.

I’ve watched more Netflix than I ever have and like millions of others, was transfixed by the sordid tales of Joe Exotic, the “star” of a seven-episode freak show called “Tiger King.”

I won’t ruin it for you if you haven’t seen it, but I will tell you that I think my wife and I watched five episodes in one sitting. I say that not as a source of pride but rather an indication of the show’s cringeworthy appeal.

My only outing is my regular run to the grocery store, which isn’t much of a field trip because it’s about a mile from our house. Still, these trips have led me to make the following observation — Americans, and I’m including myself, need to eat more fruits and vegetables. You can’t find a roll of toilet paper or a frozen pizza, but you can buy enough Brussels sprouts and navel oranges to keep you going for weeks.

There is one, universal and undeniable essential with which we all need to come to terms — we’re in this together and whether you’re dealing with a surplus of sprouts or teenagers, each is a blessing, and small price to pay for the greater good.

Rich Manieri is a Philadelphia-born journalist and author. He is currently a professor of journalism at Asbury University in Kentucky. His book, “We Burn on Friday: A Memoir of My Father and Me” is available at amazon.com. You can reach him at manieri2@gmail.com.