In span of 24 hours, Stoner went from a Broadway performer to unemployed 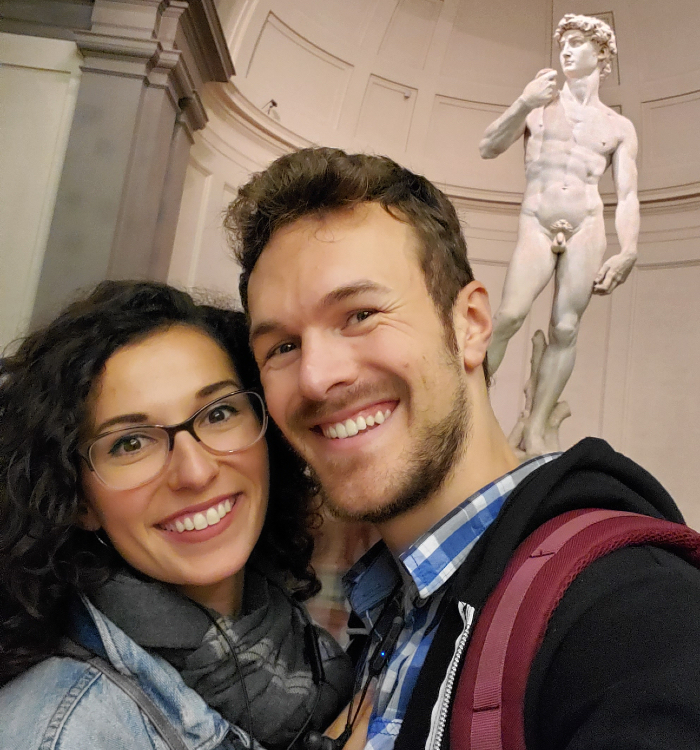 Cassidy Stoner and her boyfriend Christopher Garber in Florence, Italy in 2019. Photo courtesy of Cassidy Stoner.

Albemarle native Cassidy Stoner is stuck in the national epicenter of the coronavirus outbreak, though she’s taking it with a grain of salt.

“I feel great,” she said with a laugh from her boyfriend Chris’ apartment on 36th street and Lexington Avenue in New York City, “but that’s the rub of this whole thing — you could feel fine and not know you’re carrying it.” Since she nor Chris have exhibited any symptoms, they have not yet been tested.

For the last several weeks, the 25-year-old has been spending the majority of her time in the apartment, which she moved into in early March.

But she appreciates how serious the political leaders in her state have taken the crisis. Several weeks ago, before most states, Gov. Andrew Cuomo ordered all nonessential workers in the state to stay home to limit the spread of the virus which has already infected roughly 160,000 people (including more than 87,000 in the city) as of Friday morning, according to the New York Times. More than 7,000 people have died in the state. To put it in perspective, New Jersey has the second-highest number of confirmed cases with roughly 51,400.

“If you look at the news and you see, ‘Oh, New York City is shut down, New York City has a shelter in place,’ I think to people who don’t have roots here that sounds really scary,” said Stoner, who has called the Big Apple her home since 2012, when she started school at Pace University.

“But being here I’m like, ‘Thank God,’ ” she said, because Cuomo and NYC Mayor Bill de Blasio “are taking this seriously and we are doing whatever we can to flatten the curve as fast as possible.”

She refers to the decision to self-quarantine and shelter at home as a “selfless act,” saying “it’s not just about preserving yourself it’s about preserving the people around you that are more vulnerable than you,” she said.

From ‘Aladdin’ to self-quarantining at home

It was a wild March for Stoner.

Just a few weeks ago, Stoner, a Gray Stone Day School graduate who spent about a decade with Albemarle Academy of Dance, was touring the country as a Broadway performer in the hit musical “Aladdin.” She was the understudy to the actress who played Jasmine and also was a swing, covering for eight women in the show whenever one was unable to perform. “It’s like an insurance policy,” she said about her role as a swing.

She had been with the production for two years, visiting cities all across the country, including Charlotte last fall. She and her fellow performers were in Austin, Texas March 12 when they learned the theater was closing due to concerns over the coronavirus. She traveled back to NYC for what she thought was a week’s layoff before more shows in San Antonio.

On Friday, March 13, of all days, she received an email from Disney explaining that, due to the coronavirus outbreak, the rest of the shows for “Aladdin,” which were set to run until the end of April, were canceled. All Broadway shows were also shut down.

Within 24 hours, Stoner was abruptly unemployed.

She said she felt robbed of the opportunity for closure not just for the show but for her fellow performers, whom she calls her family, that she spent two years getting to work with and know.

Stoner can no longer go to auditions. She can’t meet up with her fellow Broadway friends. She, like most everyone else in a city of more than 8 million, is holed up at home.

Adjusting to life in the epicenter of the virus

Though Stoner lived in the city during Hurricane Sandy, when she was without power, water and felt unsafe, this new crisis is different.

“It’s pretty easy to stay safe outside because there’s not a whole lot of people outside,” she said. “New York City right now, it doesn’t feel unsafe. I do not feel that I am in jeopardy being here, especially if I do what everyone is supposed to be doing, which is social distancing and staying inside.” 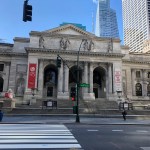 Since New York Gov. Andrew Cuomo ordered all nonessential workers to stay home, much of the city has looked like a ghost town, including New York Public Library. Photo courtesy of Cassidy Stoner. 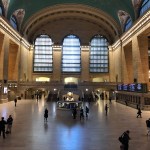 Grand Central Station is usually bustling with large crowds of people, but not lately due to the spread of the coronavirus in the city. Photo courtesy of Cassidy Stoner.

She and Chris were taking daily walks outside, especially to nearby Bryant Park and the New York Public Library, but have recently limited them. “It’s really strange to walk up to the library and see nobody there, but the lights are on,” she said.

She has also visited her local Trader Joe’s only twice in March for food and has also tried to support local restaurants that have closed in-house dining. She and Chris recently ordered delivery from one of their favorite neighborhood Thai restaurants.

While inside the apartment, Stoner tries her best to stay busy. She works out at home, takes online mediation classes and tries to journal as much as she can. She also partakes in Facebook Live, Instagram Live dance and yoga lessons with her Broadway friends. Stoner still has voice lessons each week with her teacher via Zoom and recently started writing stand-up. She has also baked cookies and watched the popular “Tiger King” series on Netflix.

Stoner misses her family in Albemarle. She talks with them regularly and even thought about returning to her home state. Stoner ultimately decided to remain in the city due to safety concerns.

“With all the traveling I’ve been doing and with him (Chris) being here in New York, it is probably safer for us to assume that we are probably carriers” of the virus, Stoner said. “I don’t take it lightly just to pick myself up and move back home to North Carolina and potentially bring it to my community.”

She said she worries about her parents and grandparents in Albemarle as much as they worry about her living in NYC.

Though Stoner doesn’t know anyone personally that has contracted the virus, she has read about Broadway performers who have tested positive.

Having been dealing with far more stringent restrictions than those in most other states, Stoner said it’s important for people to be safe, take the virus seriously and trust their political leaders and their decisions. She’s dismayed by reports of people still congregating in close quarters or at the beach, calling those people selfish for potentially endangering others.

Stoner is still upbeat and believes the crisis will eventually abate and that once it does, the theater will play a key role in helping people resume their normal lives.

“I think after civilizations spend so much time in a dark place, you have nowhere to go but the light,” she said, “and that’s all I think that theater does — it brings to light the possibilities of humanity.”