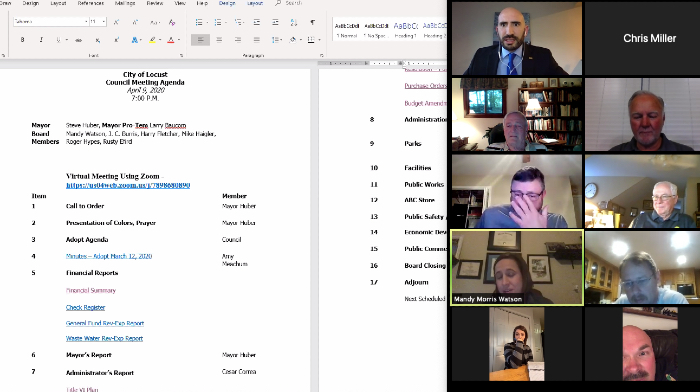 The Locust City Council had to conduct its April meeting digitally via Zoom due to the coronavirus pandemic.

The Locust City Council convened for its monthly meeting Thursday night but with a twist — each council member, along with the mayor, city administrator and clerk, met from the comfy confines of their homes through the power of Zoom, a video conferencing app.

The ongoing coronavirus pandemic has forced many people to have to deal with the new reality of digital communication and the Locust City Council was no different. After making sure each participant was not muted and could hear the others, the meeting began, like so many in the past, with Mayor Steve Huber initiating the Pledge of Allegiance.

City Administrator Cesar Correa explained that due to the coronavirus, much of the planning for the upcoming budget, which took place during the council’s late February budget retreat, has changed.

“It’s like we met the day before everything started going south with the virus,” Correa said. “We were really happy with our plan … and now we’re basically going to have to start part of that from scratch.”

Correa said the city has received information from the North Carolina League of Municipalities that due to the impact the coronavirus pandemic has had on the state economy, the group is anticipating a significant reduction in sales tax projections — as much as a 30 percent decrease — for at least the third quarter of (July through September) if not longer.

Correa said he and other officials are planning to look through every source of revenue for the city to make a recommendation as to how to proceed in time for a budget introduction in May.

“We are going to have to be even more conservative with our revenue projections, particularly on the sales tax portion of it,” Correa said, including making conservation projections on property taxes based on the city’s collection rates from the 2008 recession.

The city will reach out to Cabarrus and Stanly to see what the collection rate for property taxes was in 2008, which will help determine what the property tax levy will be for the upcoming fiscal year.

“We don’t know exactly what that’s going to look like,” Correa said, “but it’s going to reduce our revenues which means we’re going to have to make some changes throughout the revenue expenditure side.”

One change Correa proposed was allowing the city to take $40,000 out of this year’s budget to buy a Dodge Durango including equipment for the Locust Police Department.

“We are wanting to take it out of this year’s budget because we have pretty good surplus that is going to be available at the end of the year,” in the general fund, Correa said. The purchase would freeze cash flow for next year and help the city in tying the new revenue projections to the new expenditures.

The money will be reappropriated from the general fund to the police department to allow it to purchase the vehicle.

Another reason Correa made the proposal was because the city was told there would likely be a reduced number of vehicle units available.

The proposal passed and the vehicle should come to the city at the end of June.

The one revenue the city projects will continue to perform well is ABC sales. The steady purchases at the Locust ABC store will help offset some of the other revenues that will be negatively impacted due to the virus.

Councilman Rusty Efird said the ABC store had its highest volume in sales ever for March, when it made $292,000. That was an increase of $118,000 from last year’s March numbers.

“Thankfully they didn’t close our ABC store,” Efird said. “We still have some revenue coming in.”

During closing comments, Councilman Harry Fletcher made a point to recognize many of the heroes — grocery store workers, cashiers, healthcare workers — who are risking their own safety to continue doing their jobs.

“During this holiday season when we’re thanking God for everything we’ve got, let’s keep those people in mind, too,” he said.