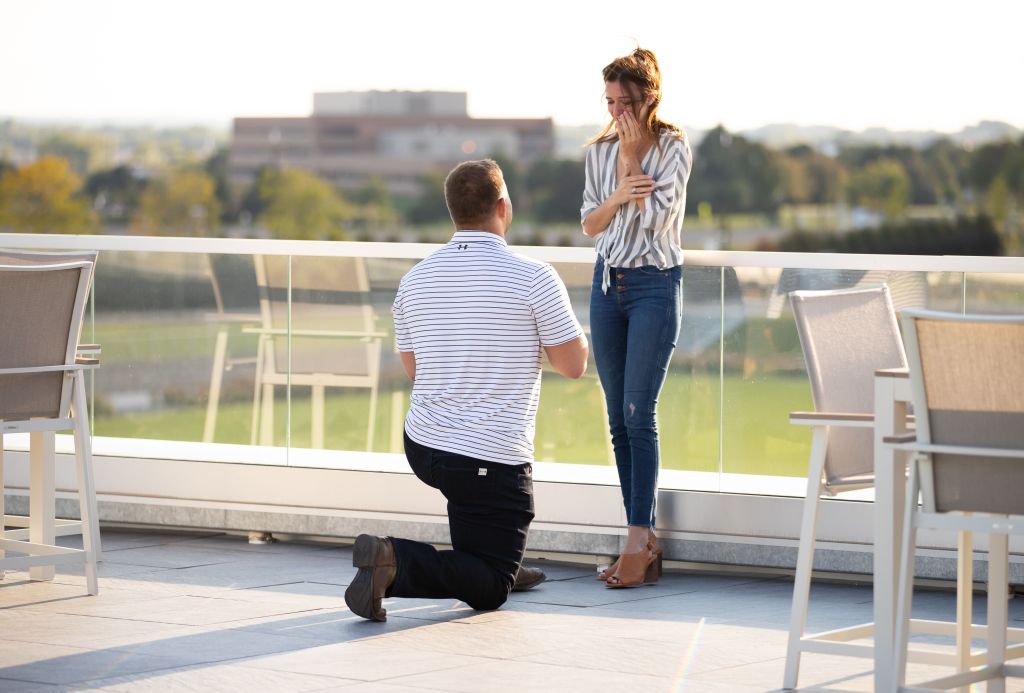 Minnesota Vikings photographer Andy Kenutis was tucked away to capture this image of Minnesota Vikings center Garrett Bradbury proposing to his girlfriend, Carson Kowar. Carson grew up visiting her grandparents in Albemarle, where she discovered her artistic talents.

Soft, golden light filtered in through the screened-in porch and warmed the sketchbook of white paper that a young Carson Kowar held in her lap.

Outside the farmhouse in Albemarle, land stretched for acres — some occupied by velvety, black-and-white cows and some by a colorful, sprawling garden.
Visits to her grandparents’ home were special. Carson loved playing with Salem, their black shih tzu, and joining her grandfather on the porch to trim the ends of sugar snap peas or husk yellow ears of corn.

But best of all were the drawing lessons.

Elwood Mabry passed along his artistry skills to his granddaughter, who remembers learning to sketch farm animals during those summer evenings.

They weren’t the first lessons Carson ever received, however. In fact, she started taking art classes at the age of 3. She can’t recall a time when she wasn’t drawing. Snowmen, animals, things around the house. When she got into middle school, people and faces. In high school, she was introduced to the technique of charcoal drawing.

“I really gravitated toward it. I liked the outcome, and it just came really naturally to me,” she said.

Around that time at Charlotte Christian, she began winning art contests and earning awards for her work. And it was there she met her now-fiancé, Minnesota Vikings center Garrett Bradbury.

“Her artwork would be put up throughout the hallways of our school, and she constantly won all these awards; she was winning money in high school,” Garrett recalled proudly over a recent phone call. “I mean, it was crazy.”

So, Carson was paid for her craft long before you were …

“That’s true. She absolutely was killing it before I was,” Garrett laughed.

Carson never planned to make drawing her career because she associated the profession with, as she put it, “moving to New York and making no money.”

After plenty of convincing from her high school art teacher, she found herself applying to N.C. State’s College of Art and Design.

“She wouldn’t brag about this, but N.C. State’s design school recruited her, kind of similar to football recruiting,” Garrett said. “They wanted her.”

One year after Carson started at N.C. State, the school’s football team recruited Garrett. They shared the college experience for two-plus years before Carson graduated and accepted an internship in Baltimore with Under Armour, where she worked for the print-and-pattern team.

“Basically, it’s any fabric that’s not a solid color, so it has some kind of design on it that spans over the entire fabric,” said Carson, who was hired following the internship.

“I did the golf stripes for Under Armour for those three years, too,” she added. “It was cool seeing Jordan Spieth wearing my stripes.”

While the couple maintained a long-distance relationship while he stayed at N.C. State for a fifth season, they began to realize his dream of playing in the NFL would be a reality.

Carson decided to leave her job and start her own business.

“I wanted to have something that could be really flexible and something that I could essentially take with me wherever we went. I knew it would be an adjustment because I was coming from a 9-5, I was making my own salary and my own money and I was feeling really proud about being independent,” she said. “Both Garrett and I were refocusing on our lives on football but also on what’s going to be good for our relationship and how do we make this next phase of our life work.”

When the Vikings drafted Garrett No. 18 overall last April, the couple moved to Minnesota, where she felt welcomed.

“It’s been really fun and a really unique experience … and an awesome community to be a part of,” she said. “As soon as Garrett got drafted, and even before, we knew some wives who had been in the NFL who reached out and provided insight on what this life could look like. It was really neat to immediately be embraced by the women’s community of the NFL and of the Vikings.”

Although Minnesota received Carson and Garrett with open arms, they still were quite unfamiliar with their new home.

So when Garrett decided to pop the question the weekend of the Vikings season opener, he opted for a proposal at Twin Cities Orthopedics Performance Center.

“Thinking about special places, there really wasn’t [much connection in Minnesota yet],” he said. “But I was like, ‘You know what? The Vikings brought us up here to Minnesota.’ ”

The plan was in action.

Carson admits she was hopeful a proposal would happen soon, but she anticipated it would be Week 3 of the season, when her family had planned to visit. So she didn’t think anything of it when Garrett planned a double-date with Vikings guard Pat Elflein and his fiancée, Emily.

She also thought nothing of it when Pat and Emily “last-minute ditched” the other couple.

Garrett and Carson went ahead with their plans for a nice dinner out, and afterward he mentioned he had to stop at the team facility to prep cold brew coffee for the offensive line meetings the next morning.

“It was part of his rookie duties,” she said. “While he was making cold brew, I noticed the sun was setting. I was like, ‘Garrett, let’s go outside; let’s go look at it.’

“I basically teed it up for him, having no idea,” she laughed. “It was really pretty outside, and we were standing out on the balcony watching the sunset. He turned to me and proposed, said some really sweet things and he completely caught me off-guard.”

Reflecting back on the evening, he said it “worked out great.”

Vikings photographer Andy Kenutis was on hand — and hidden — to snap photos of the big moment, capturing images that Carson continues to cherish.

“I didn’t know anyone at the time, and her friends all told me, ‘You need a photographer.’ And I’m like, ‘Well, where do I get a photographer?’ ” Garrett said. “I reached out to Andy, and he was awesome. He snuck out on the balcony and took a few photos, which she appreciated a lot.”

The rookie had one more surprise up his sleeve.

When the couple arrived back at their apartment, Garrett suggested they use the complex’s billiards room to call their family and share the news. Except, the room appeared to be in use.

“I hear a party going on in there, and I’m like, ‘Garrett, we can’t go in there,’ but he just keeps walking,” she said. “We walked in, and he had surprised me with his entire family, my entire family — I think there were 30 of our friends.

“He really got me then, and I just lost it, I started crying. My brother had just finished his baseball season and I hadn’t seen him in a while, so having him there was really special. He really surprised me.”

“We beat the Falcons, so it was just kind of the perfect weekend,” he said. “It was cool because I was still pretty new to the team, but everybody on the team was just so congratulatory and happy for Carson and me. It was awesome.”

While Garrett navigated his first pro season, Carson continued to grow her business.

Requests for drawings came from family members, friends and acquaintances. However, the inquiries began to trickle in — and then steadily flow — from people Carson had never met.

She also received requests from players’ wives or girlfriends seeking a keepsake of their favorite game-day image. 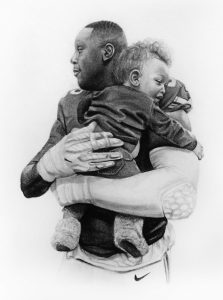 Carson Kowar recreated in charcoal a photo of defensive tackle Jalyn Holmes holding his infant son on the sideline before a game.

Carson recreated in charcoal a photo of defensive tackle Jalyn Holmes holding his infant son on the sideline before a game.

Having seen Carson’s artwork, Smith reached out and asked if she could create a drawing of Kendricks’ reaction to a fourth-down stop against the Cowboys to end the Sunday Night Football game and seal a Vikings win.

She especially enjoyed the project based on the photo Smith choose.

“Just the pose that he’s in, and the facial expression and the turf, it just had a lot of character,” Carson said. “It was a really fun one to draw.” 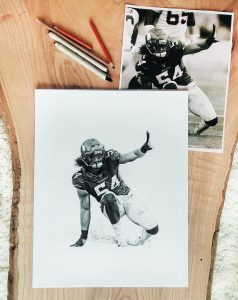 Kendricks later reached out to Carson personally to thank her for doing the drawing.

“It’s something unique that you can’t really buy in a store, and it’s really personal to him,” Carson said. “He was really appreciative, which was cool.”

Creating drawings for people, whether she has a personal connection or not, proves rewarding for Carson, who said she has especially enjoyed the Vikings-related artwork.

“Now being on this side of it, you realize how much family sometimes sacrifices to help propel your loved one in his career and be there for him, and it makes these pictures even more special,” she said. “Those are memories that they’re going to have forever, and I feel like a drawing is able to capture that in a really special way that’s not just a photograph.

“It’s really cool and really honoring to be a part of it, especially knowing that this is going to hang in somebody’s home for a long time. It’s not something that I take lightly.”

Carson is highly critical of her work, striving to make sure that each detail is accurate.

“I am always asking Garrett to look over every single drawing,” she said. “I’m like, ‘Does this look right? Is there anything wrong with it?’ Even if there’s something the slightest bit off, I want to make it look as realistic as I can for the people I’m drawing it for.”

“If it’s for someone that I know, I can tell right away — “Yep, I can see that’s so-and-so’ — because it’s just so realistic. She brings these pictures and memories to life,” Garrett said.

Carson fields commissions and has been hard at work producing charcoal drawings for clients all over the country.

She’s happy to be working while she and Garrett practice social distancing in Denver during the COVID-19 pandemic, and she’s especially grateful for the opportunity to provide uplifting gifts for others during uncertain times.

“It keeps me busy, but it also gives me a little bit of encouragement and joy knowing that, especially in these harder times, what I’m doing is something that can actually maybe distract somebody from what’s going on or help them … refocus on what matters most,” Carson said.

From player and family portraits to pets, she has a difficult time identifying a preferred subject matter. She enjoys them all for different reasons.

But dogs are tough to beat.

“I’m always excited to draw pets,“ she said. “Human faces, you can tell so specifically if something is even a little bit off. If something’s just slightly tilted in the wrong way, you can tell. But with pets, each has its own face and characteristics that you want to capture, but there’s a little more leeway, which is always nice.

She has a handful of favorite drawings, usually older photographs.

“Some of my favorite ones have been just those old family photos that, when you go to your grandma’s, you look through,” she said. “I have one that I really like … of the grandpa and all of the cousins together. I think it turned out really well. I just love it.

“I think it reminds me of being at my grandparents’ house and being with my family. That’s one of my favorites.”

Lindsey Young is assistant editor and staff writer for Vikings.com. The above article was edited for length. Read the full article at https://www.vikings.com/news/garrett-bradbury-talented-artist-with-special-connection-to-team .