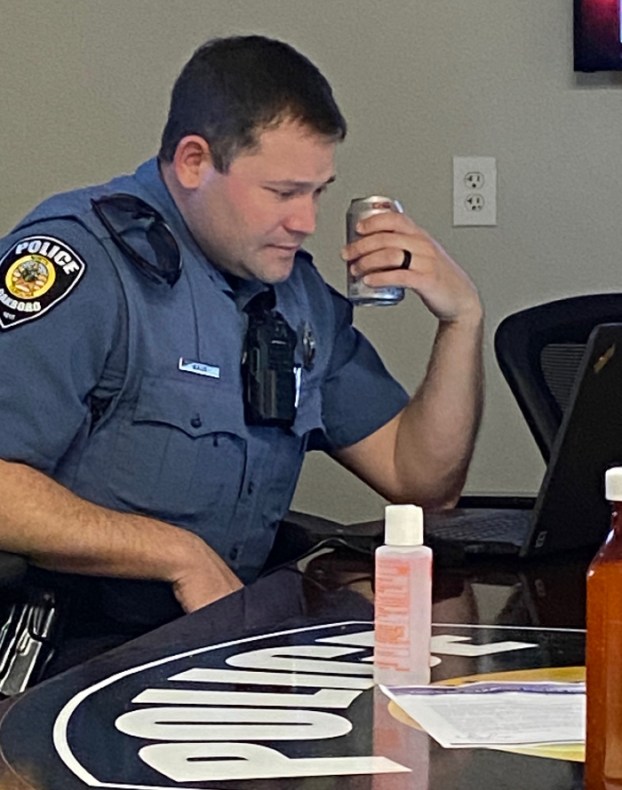 Ever since he began his law enforcement career in 2012, he wanted to someday become a school resource officer. He achieved his goal in January, when he began work as resource officer at Oakboro Choice STEM school.

“I absolutely love it,” he said of being able to interact with the students each day. “I just kind of have a natural affirmation for children.”

Unfortunately after only a few months on the job, the coronavirus pandemic disrupted life for everyone and K-12 schools across the state closed a few weeks ago. Though Kaus can no longer be around the kids at the school, through the power of the Internet he was recently able to interact with some of them.

He was contacted by fourth grade teachers Pamela Faison and Angelina Smith about reading with their students on Google Meet, a video conferencing app. Kaus was familiar with the students, having read to them earlier in the year.

“The fourth-grade team decided to reach out to Officer Bryce because he is part of the OCSS family and the students really respect, love and miss him,” said Faison. “On any given school day, he is a ray of sunshine in our students’ day; he eats lunch with them, stops by the classroom and checks on them and has even joined us for recess.”

Last week, he was able to participate in an online reading activity with more than 20 of Faison and Smith’s students. From the confines of the police department’s conference room, Kaus was able to communicate with the students and see those that had cameras. He called on students to read each page of “Treasures” and they would occasionally stop to discuss interesting facts and answer questions at the end.

The activity lasted about 45 minutes.

A picture of Kaus on his computer was posted on the Oakboro Police Department Facebook page. It read: “Our teachers are still working, kids are still learning and we are still here to support our community.”

Kaus said the students enjoyed spending time with him.

“I have a lot of fans in the fourth-grade class,” he said. “I really enjoy being around them and they actually really like having me around. It makes me feel welcome and needed, which is a great feeling.”

His opening and closing remarks to the students was that he missed seeing them every day at the school and hoped they were doing well and staying safe.

Kaus said he plans to partake in similar online lessons in the future. Smith already asked him if he wants to help with an online math lesson.

Faison said after he finished reading with the students, they “made tear faces because he had to go.”

Runners, walkers to have new resource to explore downtown Albemarle

Folks living in the city of Albemarle looking for new routes for walking and running will have a new way... read more