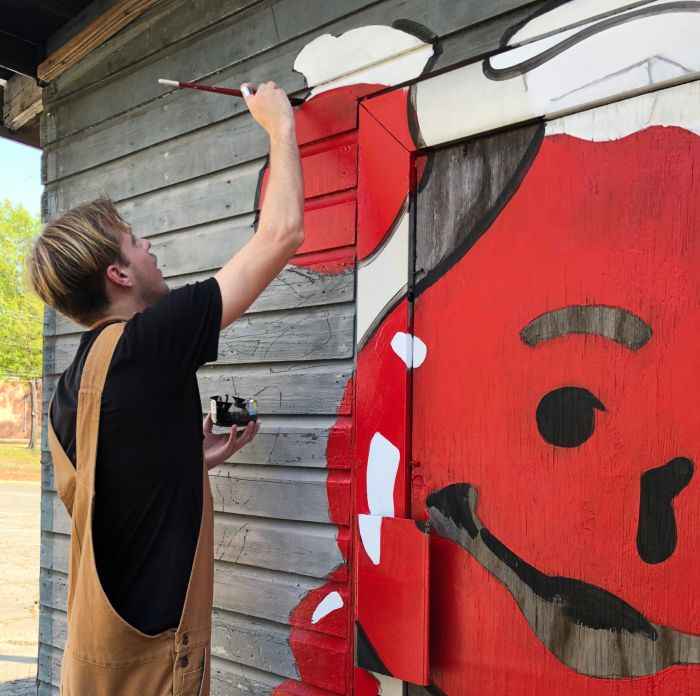 Jack Williams creates a large Kool-Aid Man mural on the side of the Sinclair gas station in Albemarle. Photo courtesy of Nicole Williams.

Due to the coronavirus pandemic, college student Jack Williams recently found himself back at home in Albemarle with lots of free time.

But the UNC Wilmington senior has been efficiently taking advantage of his time. He has created several public art pieces at the old Sinclair gas station on the corner of North Second and Montgomery in downtown Albemarle.

While many people likely viewed the gas station as another abandoned building, Williams saw an opportunity. To him, it was an untouched canvas, waiting to be utilized.

Williams, 21, who is studying studio art, has already produced pieces such as a giant Kool-Aid Man, a diamond-encrusted blue eyeball, a glitching TV screen and a mirror with the words “If This Is You Who Am I” above it. The majority of his pieces are done using acrylic paint. He plans to continue for however long the pandemic lasts. 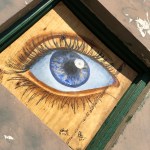 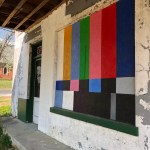 Williams also created an optical illusion using monofilament fishing line. The strings connect on opposing ends of the garage and form a pattern that’s only visible when hit by light between around 5 p.m. and 6 p.m. in the evening.

From pop art to an illusion to more realistic pieces, “each one kind of differs” from the others, Williams said.

“I’m trying to touch on as many different styles as I can,” he said. “Just kind of build a portfolio for myself as well.”

Each piece has a certain meaning to Williams. The glitching TV screen represents buildings that have closed in the city while the open door labeled “toilet” was actually the gas station’s bathroom door. 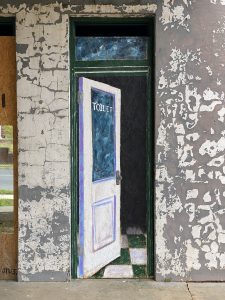 The door opening piece was originally the entrance to the gas station’s bathroom. Photo courtesy of Jack Williams.

While some of his pieces he was able to complete in a few hours, others took him several days. His plan is to have all four sides of the building covered with art. He signs his name on the lower bottom of each piece.

He has been able to incorporate the project into the curriculum of each of his art classes. He said once he graduates he would like continue creating large scale public art.

The pieces are not his first public art displays in the area. Four years ago he restored the Pepsi ghost sign downtown.

During this time of uncertainty, Williams, who graduated from North Stanly in 2016, wanted to use his skills to create artwork that would get the community’s attention and infuse life into vacated buildings, like the Sinclair gas station. Each completed piece added a bit more color to the area.

“I really just want to make people smile and just something for them to see,” he said, adding that people have told him he’s helped to bring life to the community.

And, since Williams lives right across the street, he enjoys watching people’s reactions when they discover his pieces. He said people come to the gas station each day just to see what new pieces he added.

“It’s been really neat to see the community react to it,” Williams said.

Due to messages he’s received, he plans to work on murals in people’s houses in the near future.

When he’s not working on his art, Williams has enjoyed cooking with his brother Eli and spending time with his family.

His family has also enjoyed watching Williams’ creativity flourish with the pieces.

“His father and I love that he’s able to produce art that the community can enjoy,” said his mother, Nicole, adding that her favorite is the Kool-Aid Man because “it brings back memories of my childhood.”

Nicole said that once the pandemic ends and Williams goes back to Wilmington, “pieces of Jack will remain here in Albemarle.”