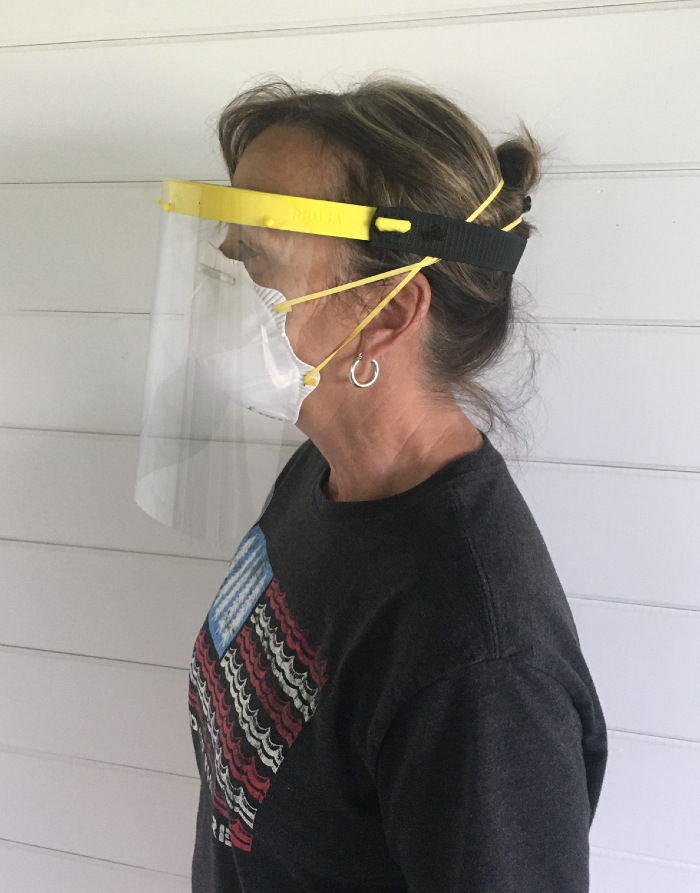 North Stanly High School drafting teacher Tina Carter has always tried to instill in her students the advice that regardless of aptitude, anybody can create anything.

During the last few weeks, Carter has been living out this philosophy as she has been creating face shields to supply to people working on the front lines combating the coronavirus. She brought a 3-D printer home from school, along with two she already owned, researched how to make the shields on the internet and tinkered with certain designs until she discovered what worked best for her. She often uses YouTube videos to troubleshoot any design problems she’s facing.

“It was just research, trying it and making it better,” she said. “That’s what the design process is and that’s what I teach every day.”

Face shields are comprised of three components: a sturdy plastic headband, a clear plastic sheet and elastic. She uses leftover PLA filament from her classroom as the raw material for the headbands. Other items used include weather stripping, which she gets from a local hardware store, and elastic, which she gets from North Stanly FACS teacher Kelley Eads and West Stanly FACS teacher Colleen O’Toole.

Carter, who teaches architectural and engineering drafting classes, starts around 7 a.m. each day and often will print until midnight. It takes her more than three hours to make each face shield. The shields cover the entire face and are designed so medical professionals can also wear a N95 face mask underneath the shield. 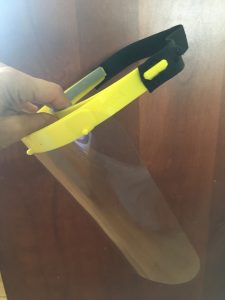 One of the face shields Tina Carter produced. Photo courtesy of Tina Carter.She has distributed her shields to Stanly County Schools staff, who are delivering meals to students, along with grocery store workers, Stanly EMS workers and medical professionals in the area, including those at Atrium Health Stanly.

Carter also makes mask extenders, which make it possible for doctors and nurses to loop the mask on a plastic knob instead of on their ears. It takes her only an hour to print four extenders.

“I just wanted to do something,” she said.

“I’m proud of Mrs. Carter and all our staff that are working to provide student services in as safe of conditions as possible,” Superintendent Dr. Jeff James said. “It truly shows how much our employees care about each other and our students.”

Carter has also received assistance from Thomas Machine Products in Stanfield. Its president, Wayne Thomas, is using a 3-D printer to produce headbands, which Carter then picks up.

“I told her I’ll be glad to run up as many as I can and use up all the materials I have on hand,” he said.

Carter said her printers, along with the one at TMP, can produce up to 20 headbands per day, as long as there are no technical issues.

Carter is reluctant to talk about the work she is doing, saying instead that the real heroes are the healthcare workers and grocery store clerks.

In describing her role, Carter brings up the analogy about a person on a beach who encounters a thousand stranded starfish. He ultimately is able to throw only 10 back into the water.