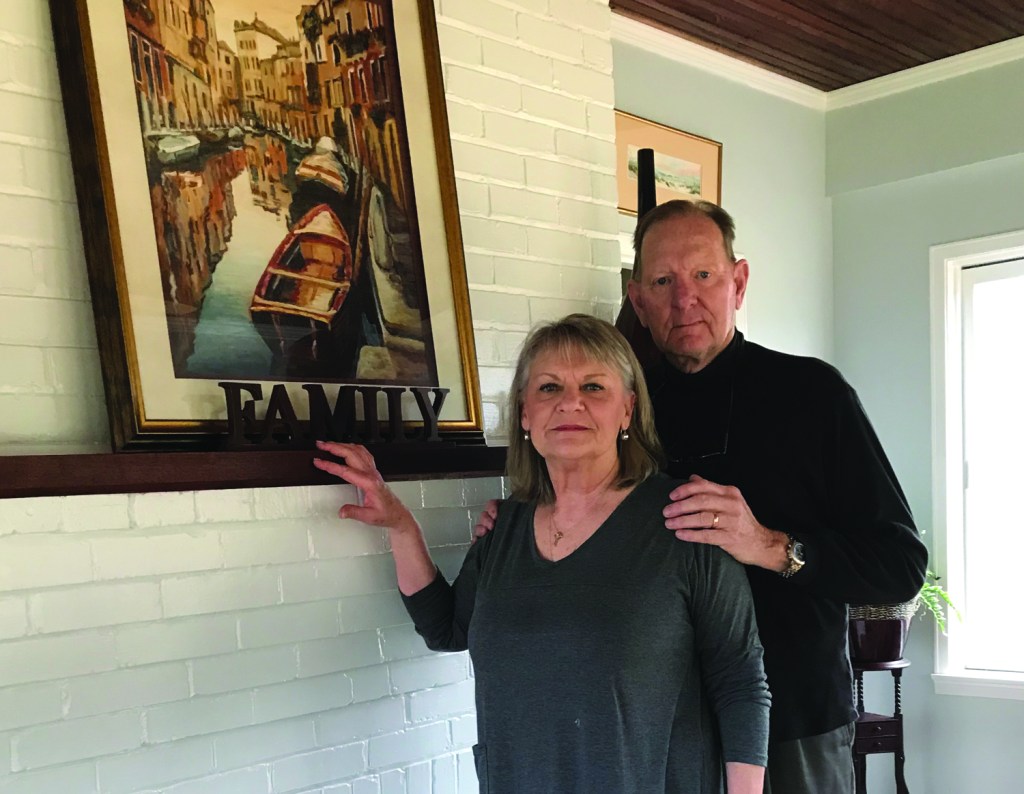 Denise Huneycutt Farris and Carl Farris in the sun room of the former “Superintendent’s House” in Badin.

Does it take a village, or does a village take hold of us?

Ask newcomers why they move to town, and don’t be surprised when they say, “I fell in love with Badin.”

Such has been the case with Badin residents like Wayne and Lynn Suida from Michigan, among others — and Denise Huneycutt Farris from Albemarle.

Farris is a grandmother of three, with childhood memories of family trips from Albemarle to Badin in the 1950s and 1960s. Her parents golfed at the former Stanly County Country Club, and often played poker with friends in the two-and-a-half story house at 76 Henderson St.

She never expected to live there.

Carl and Denise Farris first bought a home in the Historic District of Badin in 2006 so they could continue a tradition begun generations back.

“My family has held 90 reunions over the years,” Denise said.

Because the Farris-Huneycutt clan keeps adding grandchildren, cousins, grand-nieces and nephews, they’ve spilled out of the bungalow. The situation motivated the couple’s purchase of the “big” house last April.

Debra Hardister Loven, who is co-chairman, with Dale Ward, of the Badin Historic Museum, prepares presentations based on historical information compiled by ALCOA.
One source is a 1938 “History of ALCOA and Badin on the Yadkin River,” which tells how in 1913 the aluminum plant was under construction and the French company was building the town from the ground up.

The account relates some of the hardships in creating a new town. Because of the clay soil, construction workers clomped around the townsite in knee-deep mud, or choked on clouds of dust.

They worked day and night, housed in tents and shanties. Hauling of materials was handled by mule teams while supervisors utilized saddle horses.

Only an unimproved dirt road connected the not-yet-a-village with Albemarle, seven miles away. There were no recreation facilities and “law enforcements were loosely observed.”

When the French were called back to their homeland to fight during World War I, construction of the village slowed.

The landmark “Supt.’s house” took shape in the clay fields along with the “Badin Clubhouse” which was to provide housing for single men working at the aluminum plant.

Actually completed in 1914, the Farrises’ house is the only remaining single family home of its size built by the French. It’s situated where the old Kirk farmhouse used to be before Adrien Badin’s company, L’Aluminium Francais, formed the Southern Aluminium Company. The first resident, W. F. Rockwell, was employed by the French as assistant to their general manager, W. P. Marseilles, who lived in a French-built house at Whitney.

After 1916, the Henderson Street house was occupied by a succession of ALCOA plant superintendents.

Carl Farris said the house was built for entertaining. The spacious first floor includes a re-designed kitchen, a formal dining room, a living room which measures 26 feet by 16 feet and what Mr. Farris calls a “Florida room.”

A flanking screened porch has been returned to its original open-air design, though eventually the Farrises expect they’ll close it in to make a ground floor bedroom — when they tire of climbing three flights of stairs to the third floor master suite.

Jenny Henderson, Historic Badin Museum secretary, is researching the history of the Farrises’ home and assembling a notebook of her findings to give to the couple.

A picture from a January 1920 issue of “The Badin Bulletin” shows extensive hedges and large deciduous trees gracing a sprawling lawn. According to the records, ALCOA Superintendent Ralph E. Parks and his wife, Loucile, lived in the big house in 1920 with their son Richard. Also, Katie Chalmers from South Carolina lived in the servant’s quarters at the back of the property with her sons, Floyd and Ferdie.

Farris is a history buff, and has renovated another historic property in Virginia. Denise Farris’ roots in Albemarle and western Stanly County run deep.

The Farrises act at home in old places. They’re also willing to adapt. With few closets, they’ve brought in furniture to provide clothes storage, they’ve added electric receptacles for modern needs, kept what could be kept — like tubs and lavatories — and combined new drywall and replastering when necessary.

Sixty-two windows in the main house have been replaced, said Farris, along with the roof, the electrical grid and much of the plumbing. The old hardwood floors gleam.

The Farrises are pleased with ample outdoor space for children to run and explore, and they plan to host an outdoor wedding in October under the stately trees. New stories will, no doubt, be told about the old house the Farrises have chosen to preserve. As noted by Historic Badin Museum Treasurer Martha Graham Garber, “Their need for more space has given new life to a Badin landmark, and that’s a good thing.”

Jo Grey is a freelance contributor to The Stanly News & Press.