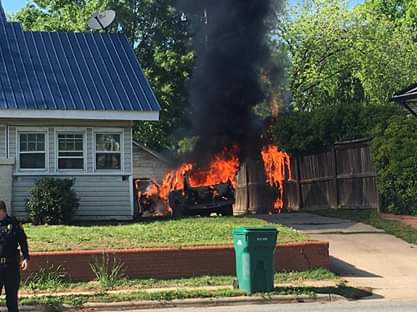 He said at 5:15 p.m., Engine 121 was dispatched to 820 W. Main St. Once at the home, firefighters upgraded the scene to a full response due to the proximity of the fire to the house. So Stations 1 and 3 also responded.

Roark said the fire was put out in about five minutes. The car, a Ford Explorer, was completely damaged. There was also about $3,000 in damage to the side of the house and about $2,500 in damage to a wooden fence that divides the properties.

Roark said the fire was intentionally set by the vehicle’s owner, Kieaun Depew, 21, but was not related to the recent arsons that have occurred in the city over the last few months.