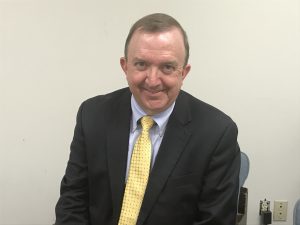 Scott Brewer is the representative of House District 66.

He planned to conduct numerous town halls in March and April throughout District 66, which includes Richmond, Montgomery and a sliver of Stanly, but the coronavirus had other plans.

“It’s hard to believe that just six weeks ago was when we had the primary elections in North Carolina,” he said, noting how quickly the world has changed.

Brewer said Gov. Roy Cooper’s new three-phase plan, similar to one issued by President Trump, to slowly reopen the state, should start May 9, provided the number of cases don’t increase. Cooper issued an executive order extending the state’s stay-at-home order through May 8.

The state won’t begin the reopening process though until there is a downward trend in the number of cases and the number of hospitalizations.

“The more we do between now and May 8 to flatten this curve out, the better we’re going to be able to handle it,” Brewer said.

He said that as part of a legislative package, the deadlines for filing income taxes will be extended. He also mentioned the House’s Economic Support Working Group would be appropriating up to $75 million to the Golden Leaf Foundation to provide emergency bridge loan funding for small businesses impacted by the coronavirus outbreak until loans can be offered via the federal Paycheck Protection Program.

It has been hard for people to apply for unemployment, Brewer said, with the numbers rapidly increasing with each passing week. Almost 720,000 unemployment claims have been filed since March 15 and Brewer said the Division of Employment Security was getting 80,000 calls per day last week. He said DEC has been training more people to try to handle the increased call volume.

Many businesses are not sure if they will be able to reopen once the state eventually returns to some semblance of normalcy.

Brewer’s biggest concern is the disease is still rapidly spreading throughout the state, as the numbers of confirmed cases and deaths continue to increase with each passing week.

Stanly County, which has performed more than 700 tests, currently has 28 cases and four deaths, according to the health department.

With no vaccine or treatment having been discovered, people are still trying to figure out how to contain a disease that is still relatively new, having only been around since late last year, where it originated in China.

“They call it the novel coronavirus for a reason,” Brewer said.

Even in the face of such great uncertainty, Brewer hopes that, provided restrictions get loosened, counties can organize ways to honor high school seniors.

“These kids have worked hard,” he said.