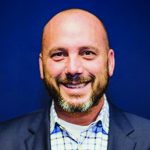 “We are fortunate that Jeff has made the decision to become a part of the Uwharrie Capital Corp team,” Dick said. “He brings much expertise and depth to our company as we continue to develop and move forward. Our customers will benefit greatly from his expertise in residential lending and Jeff shares Uwharrie’s commitment to helping people and making a difference in the lives of everyone he meets.”

Trout brings more than 25 years of experience. He began his career in the mortgage industry in 1995 as an assistant underwriter.  In 2000, he joined Myers Park Mortgage as vice president and loan originator, where he was consistently ranked the top producing loan officer, as well as Loan Officer of the Year.

He was most recently at American Security in Charlotte where he was in the Chairman’s Club and awarded the Eagle Award for highest number of loans closed for two years and runner-up for his other time spent there.

“It is a privilege to join such a talented and dedicated group of individuals whose desire to benefit the local communities is at its core,” Trout said. “I am excited about working alongside the mortgage team, many with whom I have long and productive relationships. I look forward to making a contribution to the company and the communities we serve.”