Democratic state lawmakers on Wednesday introduced House Bill 1040 to expand Medicaid in North Carolina and increase access to affordable health care for more than half a million North Carolinians. Rep. Scott Brewer, whose district encompasses Richmond, Montgomery and part of Stanly, was one of the bill’s co-sponsors.

The bill, called Healthcare for Working North Carolinians, is a Medicaid expansion bill for essential workers who fall in the “coverage gap” — making too much income for Medicaid but not enough for government-subsidized private insurance. 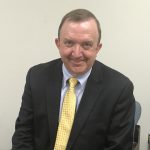 According to information in the bill, individuals will be considered part of the coverage gap if they are between 19 and 65 years of age, have a modified adjusted gross income that is at or below 133 percent of the federal poverty level, are not entitled to or enrolled in Medicare benefits under Part A or Part B of Title XVIII of the federal Social Security Act and not otherwise eligible for Medicaid coverage under the North Carolina State Plan as it existed on Jan. 1.

“I’m sponsoring Medicaid Expansion today because it will do more for health care in rural communities like mine than any other policy proposal currently on the table,” Brewer said in a digital press call about the bill. He was joined by the three other lawmakers who were the primary sponsors of the bill.

He said a Cone Health study has found that Medicaid expansion would help more than 3400 individuals in Stanly County gain access to coverage. “Expanded health care coverage means lower costs and premiums for all of us because of lower levels of expensive, unreimbursed Emergency Room care,” he said.

Rural hospitals in his district, like Atrium Health Stanly, “would be able to recover between one and two million dollars a year in currently uncompensated care, if we were to expand Medicaid,” he said, nothing that “reimbursement of some of the current uncompensated care will help keep these hospitals open.”

“When people have access to insurance, they can seek care from a primary care provider, at far less costs than seeking care in an emergency room,” he said.

Brewer noted that 133 percent of the poverty level is $16,971 for an individual, and $28,888 for a family of three. “After paying for shelter, food and transportation, there is little money left for high cost, high deductible and significant out-of-pocket expense insurance policies.”

He said when a community loses a hospital, it’s like “losing the biggest manufacturing plant in town” and the effects of a struggling hospital can be felt throughout the community.

“Medicaid expansion can reverse the trend,” he said, “and not only help rural hospitals stay afloat, but also help them expand their services.”

Brewer said that Medicaid expansion could help local businesses and government, noting that states that have expanded Medicaid have seen a 7-11 percent drop in insurance costs.

The state legislature convened Tuesday for the first time since the coronavirus pandemic spread to North Carolina. The primary task for lawmakers is to pass COVID-19 relief measures.