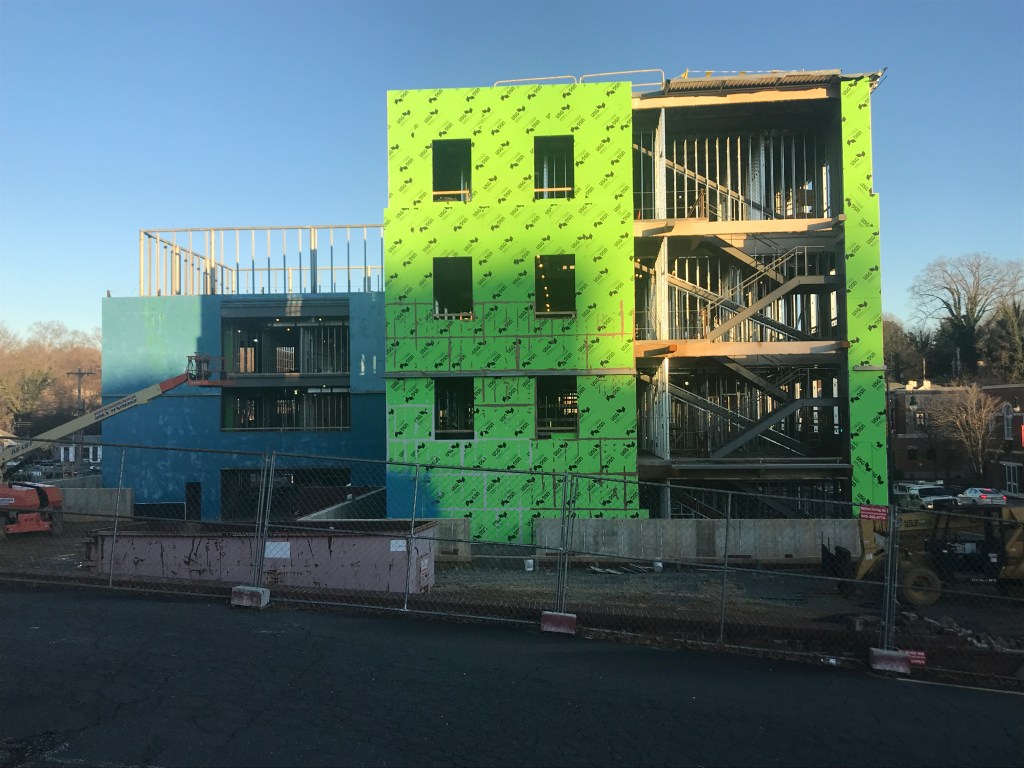 Pfeiffer University's new Center for Health Sciences facility in downtown Albemarle is expected to be complete sometime in late summer.

Construction on the inside of Pfeiffer University’s new Center for Health Sciences facility in downtown Albemarle has been temporarily shut down for two weeks after Stokes Construction learned that a few drywall finishers tested positive for COVID-19.

Doug Stokes, who is co-owner of the company along with his son Ross, said he found out Monday night and shut down construction of the inside of the four-story, 4,300-square-foot building Tuesday morning. Construction will resume May 11, though work on the outside of the facility is continuing.

“As soon as we found out, we had a meeting of our staff and we decided, for the safety of everyone involved in the project, that we’d shut it down for two weeks,” Stokes said, adding that the company talked with Pfeiffer and the architect, who agreed with the decision.

Ross Stokes said prior to shutting down Tuesday there had been no reported cases of COVID-19.

Doug Stokes said he asked the employers of each of the subcontractors working at the site to monitor the health of each of the workers and “that’s basically how we found out some guys had tested positive.”

Some of the infected employees work for the general contracting company Bonitz in Concord, Doug Stokes said. The company has not returned multiple requests for comment.

Bullard mentioned that the other infected employees work for a company based in Mecklenburg. Doug Stokes confirmed the information but wouldn’t reveal the name of the other company.

Ross Stokes is fairly confident the infected workers live outside of Stanly.

He said his employees have been trying to maintain proper social distancing whenever possible and some have been wearing masks, though it wasn’t required. There have also been visible signs posted about the importance of hand washing and social distancing along with information about symptoms associated with the virus. High touch surfaces, such as handrails, have often been regularly sanitized and stairwells are properly labeled so no workers are crossing paths.

Once the infections were detected, he said the company increased the number of on-site port-a-johns and increased the cleaning of them.

Beginning May 11, he said the company will take the temperature of every worker at the site each morning with no-touch thermometers and each of the subcontractors will have to complete health and safety checklist survey evaluations. Out of an abundance of caution, each of his employees who were around the infected workers along with Doug Stokes will be tested.

“We’re trying everything we know to be safe down there,” Doug Stokes added.

“I just have all the confidence in the world about the health measures that they’re taken,” Bullard said.

Though he originally wanted to finish the project sometime in late July, Doug Stokes said the two-week shutdown could likely affect the timetable.

When completed, the facility will be home to students in both the Master of Physician Assistant Studies program and the Master of Science in Occupational Therapy program.