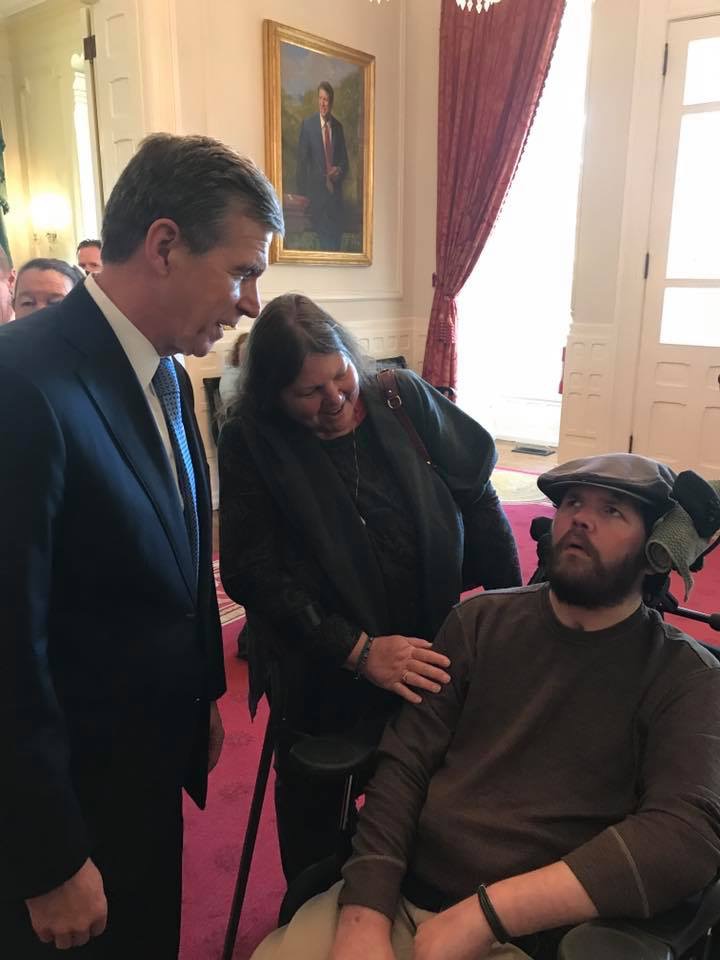 Gov. Roy Cooper meets with Jean Andersen and her son Sam in Raleigh in 2018. She continues to fight for the rights of individuals with brain injuries. (Photo courtesy of Jean Andersen)

Samuel Andersen grew up outside of Stanfield and lived a relatively normal life as a kid. He loved nature and was active in soccer, wrestling and weight lifting during his time at West Stanly High School, where he graduated in 2005.

But his life, and that of his family’s, was forever changed in 2006, when at the age of 19, he was involved in a serious car accident, which resulted in him sustaining a traumatic brain injury.

“We lived in a world of complete confusion,” his mother Jean said in a 2018 story in the Stanly News & Press.

Since the accident, Sam, who was quadriplegic, required 24-hour living assistance in his parent’s home. Jean Andersen, along with her husband Dale, cared for Sam each day, until he passed away April 22 at Atrium Health in Charlotte. He was 33.

He initially became sick a few days earlier and his family and nurses thought it was pneumonia and possibly a urinary tract infection. They took him to the hospital. His death was not related to the coronavirus, Andersen said, adding that he took the test when he arrived at the hospital and it came back negative.

She said he ultimately died of multi-system organ failure.

Since his accident, she has fought for the rights of individuals with brain injuries and she says she makes at least three trips to Raleigh each month.

“What Sam did for me was he was a catalyst for me to really advocate for folks with brain injuries and the changes that our state needs to make,” she said.

Andersen is a member of the N.C. Brain Injury Advisory Council and the Brain Injury Association of N.C. She is on the board of directors for Cardinal Innovations Healthcare. A few years ago she worked with state representatives to create a fund for people who suffer brain injuries after the age of 22, when people are no longer eligible for certain kinds of benefits.

Andersen said Sam, who was the youngest of seven, loved the outdoors, especially fishing.

“You’d never find him sitting in the house,” she said. “He was always on a tractor mowing or hunting for snakes…He was always outside.”

Sam also enjoyed raising reptiles and amphibians, including poison dart frogs. Sam was a student at Stanly Community College with plans to complete his two-year degree and then transfer to a university. Fascinated by herpetology — the study reptiles and amphibians, Sam wanted to spend time researching in the Amazon before becoming a high school biology teacher. 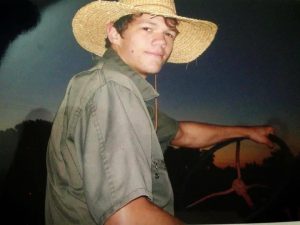 A teenage Sam Andersen rides a tractor outside, where he loved to be. Photo courtesy of Jean Andersen.

Even though Sam’s death wasn’t “totally unexpected,” with all of the health complications he’s had since his initial accident over a decade ago, “it doesn’t lessen the pain of losing him,” Andersen said. But she does feel a sense of peace that he is no longer suffering.

Though Sam may be gone, Andersen is still busy advocating on behalf of those suffering traumatic brain injuries. She still fields calls from people with questions about how to navigate the complex nature of the medical world — especially surrounding brain injuries — with its many policies and procedures.

“I have no intention of stopping that,” she said of her advocacy. “I think that’s an honorable legacy for Sam if I can continue to try to make those changes and help people.”