A racing enthusiast since childhood, Carey Maner of Ansonville has been setting the pace for success at Pfeiffer University — and NASCAR.

For about a year beginning in spring 2019, Maner, a senior communications major at Pfeiffer, interned at NASCAR’s Charlotte office as a part-time media content logger and video editor. In this position, she recorded, edited, and cataloged all media-related materials. She also received academic credit for her bachelor’s degree, which she’ll receive in May. 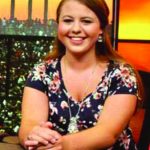 Because of the COVID-19 pandemic, NASCAR closed its Charlotte office. However, Maner remains an employee of NASCAR. Because her internship at NASCAR went well, she will interview there for a full-time position in media productions as soon as the company permits her and its other employees to return to work.

So far, Maner’s motivation, dedication and knowledge have made her a valued part of NASCAR’s media productions.

“Carey has picked up very quickly on the day-to-day duties of a logger,” said Rachel Almario, a NASCAR library coordinator. “Having prior knowledge of NASCAR and camera angles has helped her tremendously in identifying different shots that are needed for the producers when editing.

Being able to have that knowledge on the fly is extremely important when it comes to working on fast-paced projects such as production scanning, live logging and footage pulls.”

Ultimately, Maner would like to work as a media producer at NASCAR. Her duties in this role would include initiating, coordinating, supervising and managing the creation and production of movies, television shows, web series and commercial videos for use by NASCAR. She would also travel to various race tracks to gain footage and to interview different drivers or celebrities that fit into the production projects.

Maner has aspired to work in the media productions arm of NASCAR since her junior year at Anson High School, where she excelled in video editing courses taught by former NASCAR media producer Rusty Baldwin. After graduating Anson, she attended a Pfeiffer partner school, Stanly Community College, where she took courses in film and media.

After receiving her Associate of Arts degree from Stanly in 2018, Maner attended Pfeiffer on an academic scholarship. During the 2019-20 school year, her institutional aid package was funded by two scholarships that support students from Anson County: the Wade Manufacturing Company Endowed Scholarship and the Charles L. Little Endowed Scholarship. She also received the Roberta Clark (’63) and Dr. James E. (‘63) Morris Endowed Scholarship, which supports students who serve on The Falcon’s Eye newspaper staff.

During her first semester at Pfeiffer, Maner took Introduction to Video Production, a film course taught by Dr. Shaun Cashman, an assistant professor of communications at Pfeiffer. Following that semester, Carey started her search for any available part-time positions related to NASCAR media productions.

To assist her with her search, Maner turned to programs offered by Pfeiffer’s Office of Career Services and Internships, which include LinkedIn seminars, interview preparation, and ways to tap into networks of alumni and Pfeiffer friends.

During a recent interview, Maner answered some questions about her Pfeiffer experiences and her work at NASCAR.

Firstly, what makes Pfeiffer home for you?

There is not one thing that makes Pfeiffer home for me. Pfeiffer being home is more of a feeling, a feeling that you won’t find anywhere else. It is a feeling that has brought me great friendships, amazing professors, a place of acceptance and the opportunity to go beyond boundaries.

What was it about Pfeiffer’s classes that deepened your knowledge of visual communications?

Dr. Cashman, who taught me Introduction to Video Production, is very passionate about film, which works out great when you are teaching someone who, like me, is also very passionate about film. He taught us camera skills, lighting, emotion, editing, design, steps of production, behind-the-camera work and so much more. Psychology of Persuasion, Dr. Don Poe’s course, taught me a lot more about the psychological reasoning behind why people enjoy what they watch, which I take into consideration when putting together different projects. I need to understand how people are going to perceive what I am making and how to bring more viewers to NASCAR.
NASCAR has deep roots within this region of the United States. What was your motivation for working there?

I’ve been a big fan of NASCAR races for many years, and I often watch them on Sundays with my grandpa. While watching these races, I started to pay closer attention to the broadcast and mini-videos of the drivers. I wanted to create something that got people that excited and brought them together. Also, Mr. Baldwin was really inspiring: He had traveled to some of the most famous racetracks, including Daytona, Talladega and Pocono. He had also met some interesting people, such as current drivers, NASCAR legends, Garth Brooks and Ric Flair. I wanted to be able to do something just as incredible.

I liken it to being in a race car right before the race starts. The atmosphere is always full of adrenaline. It’s fast-paced and full of excitement. When your work is seen by people who love the sport just as much as you, it’s like winning the race because there is a sense of accomplishment once the checkered flag waves.

What are some skills that you have learned at Pfeiffer that you use on an average day working for NASCAR?

I use so many skills that I have learned in my classes at Pfeiffer. These include communication skills, especially organizational communications, which I learned in a course taught by Dr.

Deborah Burris, an associate professor of communications. Group work techniques, interpersonal communications and networking have played key roles in my experience with NASCAR to this point. Many of the technical skills that Pfeiffer taught me in its classes are what enable me to perform my job at NASCAR.

What advice would you give Pfeiffer students whose career aspirations are similar to yours?

Never give up. I know that sounds like a cliché, but it’s true. It took me almost five months to get the job that I have now. I reached out to so many people, who then told me to reach out to more people until finally, I found the right person who was willing to give me a chance.

You go through college and hear your professors talking about the importance of building a network, and I have found that to be true. If it weren’t for my network and not giving up, I wouldn’t be working for one of the most famous corporations in Charlotte. Don’t be scared to take chances and chase your dreams.

Thomas McEachern, a Pfeiffer 2020 graduate, contributed to this article.