Dr. Tracy Espy, the provost and vice president for academic affairs at Pfeiffer University, has been appointed the president of Mitchell College in New London, Conn.

Her first day at Mitchell will be July 1, and her last day at Pfeiffer will be May 22, after which Dr. Michael Thompson, a professor of history who directs Pfeiffer’s Undergraduate Honors Program, will take over as interim provost. 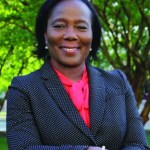 “What led me to Pfeiffer University was the mission of servant leadership and the strong commitment to educating students in a highly nurturing and supportive environment,” Espy said. “Along the way, the partnership between faculty and staff allowed us to accomplish significant goals at Pfeiffer. The improvements we made in faculty development funding, diversity and pay equity were especially important. They have become a firm foundation for the university’s future.
“These were also learning opportunities that now make it possible to take the next step in my own career development. I am grateful for the opportunity that I was given to serve Pfeiffer University.”

“She combines this innovative approach with a collegial spirit and work ethic that creates an environment of mutual respect within working groups,” he said. “This sincere approach is formed by years spent in the South and the Deep South, I suspect.

“But on a deeper level, it is also the result of Espy’s quiet but unshakeable faith — and it is utterly critical in forging new relationships with partners, accreditors, and the wide variety of on-campus constituents with whom a provost or president has the opportunity to collaborate. I look forward to following the way in which her approach propels Mitchell College forward in the years to come.”

Espy’s tenure as Pfeiffer’s provost began in 2008 and includes management of Pfeiffer’s Francis Center for Servant Leadership. She also taught sociology and human services for seven years.
She shepherded the university through six accreditation processes and she reduced the number of academic divisions from seven to four, cutting costs to the university by 13 percent.

Several new academic programs were created under Espy’s leadership at the undergraduate and graduate levels, each designed to meet an identified regional need.

In each instance, Espy saw her role as orchestrating a collective effort that entails researching the needs of a field and coming up with a curriculum to meet them as well as fundraising, marketing and recruiting.

Espy is particularly proud of the progress that Pfeiffer’s faculty has made during her tenure. Scholarship, for example, has flourished on her watch — thanks, in part, to the financial support her office has provided and to the priority she has given it in evaluations of faculty.

Espy was an advocate for the strong liberal arts foundation on which a Pfeiffer undergraduate education rests, having affirmed that through the overhaul of a General Education Curriculum in 2013. This reflects input from employers who want employees who can do such things as write well, think critically and speak in public effectively.

Espy holds a Ph.D. in Child/Family-Marriage and Family Therapy from Syracuse University and and a Master of Science in Family Studies from Miami University of Ohio. She earned a bachelor’s degree from Berea College in Kentucky.

As Espy readies herself for the next chapter in her professional life, she expects that she’ll follow in the footsteps of other students, professors and staff who have passed through Pfeiffer.

“They take a little bit of Pfeiffer with them and replant that elsewhere,” she said.