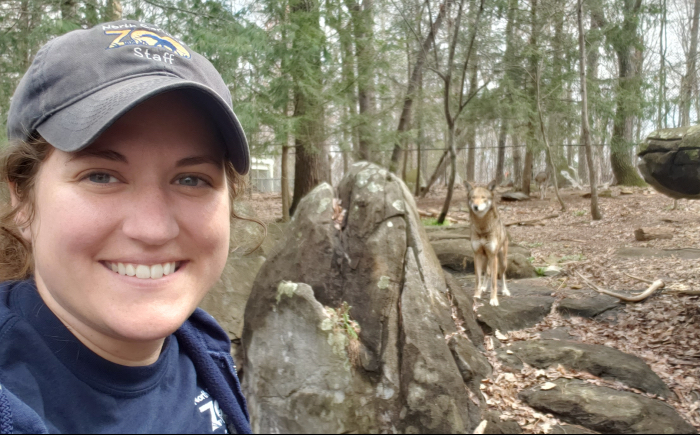 As many people across the state are likely filled with anxiety due to the coronavirus pandemic and are growing weary spending their time at home, the North Carolina Zoo in Asheboro, which closed March 17, has been posting videos of several of its animals on Facebook and Instagram as a way to continue connecting with the public.

Want to see a polar bear bear-hugging a barrel? How about baboons enjoying snacks or a juvenile Victoria crowned pigeon strutting its stuff? These are all some of the videos posted onto the zoo’s social media sites.

One of the zoo keepers that has helped make some of the videos is West Stanly High School graduate Alexis Rowe, who grew up in Stanfield and has been with the zoo for more than two years. She spends her time working in the North Woods section of the zoo, where she interacts daily with roughly 40 animals, including elk, bison, red wolves and black bears.

A video selfie she produced with two red wolves — 5-year-old Flint and 15-year-old Pigeon — was uploaded onto the zoo’s Facebook page.

Ever since the zoo closed, keepers have been encouraged to create videos of the animals to share with the public. While there are several scheduled live videos, called Zoo EDventures, that are posted every Monday, Wednesday and Friday, there are also many spontaneous videos that keepers, like Rowe, decided to shoot. In her video with the red wolves, Rowe, 29, tossed an elk antler into their enclosure and watched as they took turns scratching and urinating to cover scents and communicate.

“It’s a lot of fun” making the videos,” she said, adding that the content of the videos “are totally up to me.” She said her videos are similar to the informative keeper talks she conducts with the public.

Though she enjoys being able to continue interacting with and feeding her animals, it’s still weird not seeing the public.

The zoo has split the staff into two teams, who alternate working four days at a time, to continue caring for the animals while also making sure the employees are safe and cleaning standards are being upheld.

Rowe enjoys getting to know the animals, saying that each of them have their own unique personalities.

She hopes the videos will bring people at home joy while also giving them appreciation and a better understanding for the animals.

“It’s allowing people time to actually sit and listen and learn about them,” Rowe said. “I’m really hoping it (videos) will help people slow down and really learn about these animals and why they’re here and how they can help them.”