Despite obstacles, Badin resident continues to spread awareness about lupus 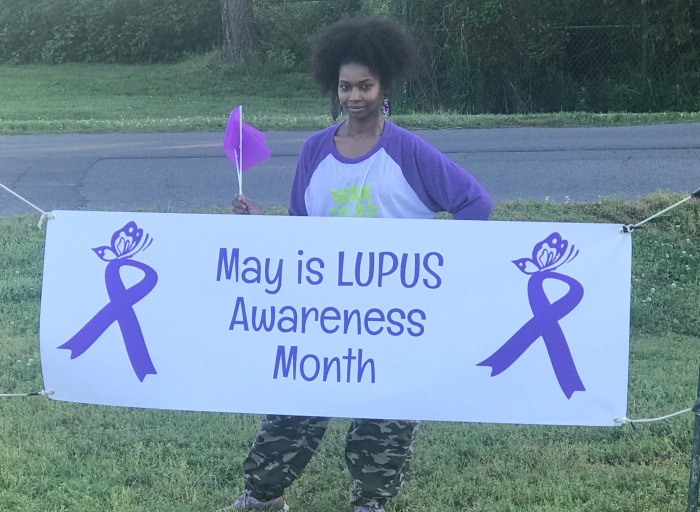 Badin resident S'era McCall, who suffers from lupus, has been busy spreading the word about Lupus Awareness Month. Photo courtesy of S'era McCall.

Badin resident S’era McCall has devoted the last decade of her life towards one important, personal goal: Spreading awareness about the autoimmune disease lupus.

Since she was diagnosed with the disease almost 10 years ago, she has overcome pain and great fatigue to reach out to others with the condition to let them know they are not alone.

With May being Lupus Awareness Month, McCall, 34, from the confines of her home, continues to spread the word about a disease that impacts an estimated 1.5 million people in the United States, mostly women of childbearing age, according to the Lupus Foundation of America.

Even in the midst of the coronavirus pandemic, which McCall refers to as “the scariest thing ever,” she is still advocating on behalf of people with Lupus and informing as many people as she can about the disease. She recently helped Badin approve a proclamation declaring May to be Lupus Awareness Month and has erected a large “May is Lupus Awareness Month” sign in the community.

Born in Badin, McCall has spent her whole life in the county. She graduated from North Stanly and attended Stanly Community College before working as a nurse at a urology clinic in Salisbury, where she encountered people suffering from lupus, an inflammatory disease caused when the body literally attacks itself.

But her first experience with the disease was a personal one: Her aunt Domninque died from it in 1996, when McCall was 10.

“I knew what lupus was at a very young age,” she said.

Though McCall experienced aches and pains throughout the years, she always chalked them up to her time cheering in school. It wasn’t until she broke out in an expansive rash — which extended to her hands, arms, chest and cheeks — and suffered a serious bout of fatigue that she visited the doctor in 2011 and discovered she had lupus.

For two years the disease was relatively manageable — with McCall still working in Salisbury, but in 2013 she said her condition, which was referred to as “systemic lupus,” became debilitating. She often made trips to the hospital with a host of different ailments: blood clots in her lungs, severe arthritis, fibromyalgia, cold symptoms, fevers and seizures. She was also taking a ton of medications, which affected her weight and caused her blood pressure to soar.

“The level of fatigue was just unbearable,” she said. “I just had no energy to do anything.”

McCall notes her aunt had many of the same symptoms she is currently dealing with.

One of the hardest things to accept, after she had to leave her job, was her loss of independence. Having previously lived on her own, she now lived with her family and relied on them for support.

“I was in the career of my life and climbing ladders and all of a sudden it kind of hit me out of left field,” she said. “I had to pack up and move home.”

Though she has learned to live with lupus, she says it’s still “an everyday struggle.” She constantly feels tired and continues to make frequent trips to the hospital. She estimates she takes up to 50 pills a day.

The coronavirus pandemic has added extra concerns for McCall. As someone who has an underlying medical condition, along with a weakened immune system, she is at a higher risk for severe illness from COVID-19, the disease caused by the coronavirus.

Knowing she is especially vulnerable she has remained at home. This has meant canceling physical therapy appointments (she recently underwent knee replacement) and making the decision to avoid attending the funeral of a cousin.

As someone who depends on the drug hydroxychloroquine, which is used to treat lupus, McCall is worried when she hears political leaders, including President Trump, touting the drug as a possible coronavirus treatment, despite a lack of evidence about the drug’s effectiveness. Trump recently announced he has been taking the drug.

News reports say thousands of people have hoarded the drug, causing shortages for people, like McCall, who need the drug the most. McCall said she has struggled to get the adequate supply that she needs.

“It’s very frustrating,” she said. “I sympathize and empathize with those who are suffering (due to coronavirus), however, I use this to prolong my life.”

She said the drug, which she’s taken since 2011, is used to help slow her immune system from attacking itself.

“If I don’t have the drug that’s helping stop my body from attacking its critical organs, which have already had some damage, it is very scary and life-threatening and fatal.”

Reaching out to the community

Though the disease deprived her of many things, it could not take away her drive to help others.

“I’ve always felt compelled to help and to love,” she said.

Last year, McCall reached out to the Stanly County Family YMCA about creating a support group. She had been a member of the Y for a long time, and wanted to use the facility as a community space for people to come together.

After talking with membership engagement director Stephanie Campbell about her idea and receiving the green light, McCall began hosting a two-hour meeting on the second Saturday of each month, bringing in people from all over the county. At her meetings, which began in February 2019, she said there is usually a nice mix of people with lupus along with people wanting to learn more about the disease.

“I decided it was time for me to take that step and start a support group because there were none around here,” McCall said, noting that the nearest group was an hour away.

“I love what she’s doing,” Campbell added. “Instead of letting it (lupus) take control over her, she’s taking control over it and making sure she’s being supportive to those around her and those in need.”

In addition to her physical support group, she also created a virtual one on Facebook called the Lupus Support Group of Stanly County, where she can get better acquainted with her “fellow Lupus Warriors.” She posted that her mission “is to provide an atmosphere for lupus community members, family members, caregivers, etc. to meet and share with others who understand your perspective and receive educational, social and emotional support.”

She also was organizing a walk to spread awareness about the disease, but has had to put that on hold due to the pandemic. She still hopes the walk can happen sometime this year.

“I want to reach all areas of Stanly County,” she said, calling the work she’s doing her purpose in life. “I want people to be aware and to know that this is a serious illness that is on the rise.”

She said organizing the support groups have been “the most powerful thing that I have ever imagined or ever felt.”

“This is better than medicine for me,” she said.