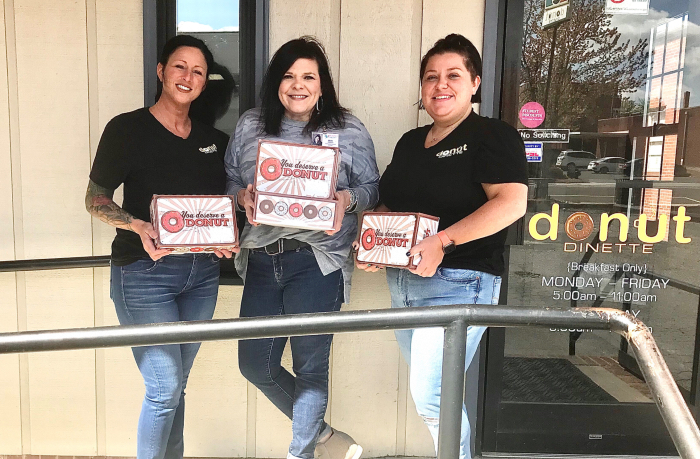 The Donut Dinette in downtown Albemarle has been donating leftover doughnuts to a variety of nursing homes in the area to do its part to help the community during the coronavirus outbreak.

Giving the doughnuts to the public is a better and more worthwhile effort than simply throwing them in the trash, owner Doug Laxton said.

He has been giving between four to six dozen twice a week to Beth Plowman, community outreach manager with Hospice of Stanly and the Uwharrie, who then takes them to various nursing homes in the county. Plowman gives them to a contact person at each facility, who then distributes them to the residents. Plowman has been collecting doughnuts from Laxton for the last several weeks.

“It’s really nice to be able to share something with the residents and staff of these facilities that might make their day a little brighter,” Plowman said.

“I think Doug Laxton is awesome for being an engaged partner in our community during this critical time,” Plowman added. “His thoughtfulness makes a difference to the facilities’ staff, residents and the families that are missing their loved ones because of the visitor restrictions.”

Plowman made a recent delivery to Trinity Place.

“The community reaching out to support our residents during this time is heartwarming,” said Trinity Place administrator Stephanie Herrin-Huneycutt.  “We appreciate the gesture and actions of our Trinity Place friends.”

And the residents definitely enjoy the treats.

“Donut Dinette has the best doughnuts,” said Trinity Place resident Lavenia Chandler, who added that chocolate-covered are her are favorite. 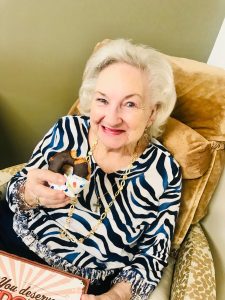 In the past, Laxton has also donated his doughnuts to the hospital, police department, fire department, 911 center and the sheriff’s office.

He has still been able to keep and pay his employees at both Donut Dinette and Sunrise Grill in Locust, which he also owns, at a time when many restaurant workers have been laid off. He’s staggering employee hours to be as fair as possible. Both establishments are open 5 a.m. to 11 a.m. Monday through Saturday. The Dinette, which has been around for almost seven years under Laxton, offers takeout and is limiting the number of customers inside to three.

“This is just me doing my little part” to help the community, Laxton said. “I’m just a small fish in a big pond.”