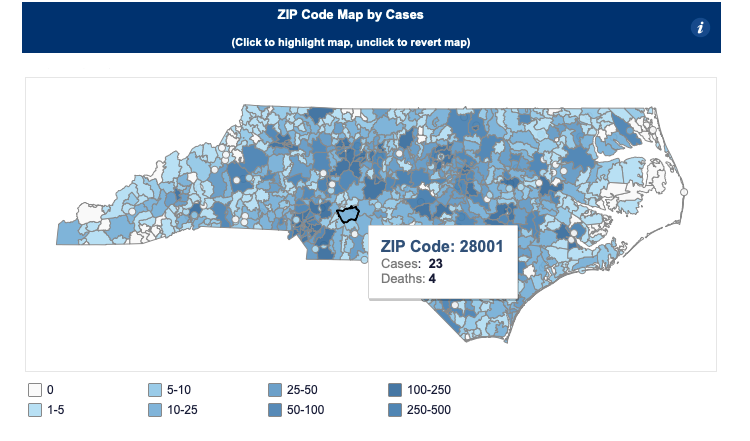 Albemarle accounts for the most COVID-19 cases in the county with 23, along with all four county deaths, according to NCDHHS data.

Albemarle’s 28001 zip code has the most COVID-19 cases and all of the deaths in the county, according to interactive data from the state’s Department of Health and Human Services, which has mapped out by zip code all the locations in North Carolina affected by the virus.

Of Stanly County’s 57 confirmed COVID-19 cases, as of Friday, the zip code has 23 cases, or 40 percent of the total, and four deaths.

While the county’s total number of cases had remained relatively stable, it increased dramatically over the holiday weekend (there were 39 cases May 22). But that’s to be expected, according to Wendy Growcock with the Stanly County Health Department.

“We anticipated an increase in cases identified due to increased availability of testing,” she said.

She added that as people resume activities as part of the state’s phased reopening plan “they are more likely to be exposed.”

The other zip codes where confirmed cases have been discovered include Norwood with 15 cases, Oakboro with seven, Locust with four, New London with four, Richfield with two, Stanfield with one and Badin with one.

Other nearby zip codes with a high number of cases include Troy with 20, Mount Pleasant with 12 cases and one death and Midland with nine cases.

Stanly County has nine cases per 10,000 residents. The county received its first confirmed case of the virus March 20, while its first death — a person in their 60s with underlying health conditions — occurred April 9.

Statewide there are 26,488 confirmed cases with 680 people hospitalized and 859 deaths. A total of 391,231 North Carolinians have been tested for the virus, of which nine percent have been positive. The state has at least 250 contact tracers, who are working to identify people that have recently been in close contact with someone who has tested positive for the virus.

In terms of personal protective equipment, the state has enough gloves and procedure masks for healthcare workers, but more N95 respirator masks, gowns and face shields are still needed, according to data on the NCDHHS website.

The United States has more than 1.6 million cases and roughly 98,000 deaths, both the most of any country, according to data from the New York Times.

While younger people are more likely to catch the virus, 63 percent of deaths have involved people ages 75 and older followed by 21 percent of people 65 to 74.

A forecast model created by the Institute for Health Metrics and Evaluation (IHME), an independent global health research center at the University of Washington, projects North Carolina to have 1,397 COVID-19 related deaths by Aug. 4. The model also projects the country to have 131,967 deaths related to the virus.