One of Stanly County’s own will be attending the Democratic National Convention in
Milwaukee in August. 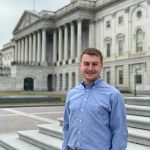 Dylan Frick, of Norwood, was elected last week by delegates to the 8th Congressional District Democratic Party to serve as a delegate to the DNC. Delegates to the DNC serve the official role of formally nominating the Democratic nominees for president and vice president.

“I’m honored to be selected by Democrats from Concord to Fayetteville to represent the 8th District at the DNC. Whether it’s virtual or in-person, I’m excited to formally nominate Joe Biden to be our next president. It’s time for a change in our country, and it’s time for more civility in our government, and that’s what I’ll be voting for at the DNC when I cast my ballot for Biden.”

Frick currently serves as chairman of the 8th Congressional District Democratic Party, and is Rep. Scott Brewer’s legislative assistant. He is the grandson of former Norwood Mayor Beverly Johnson.

Frick was the only Stanly County native to be elected as a delegate in North Carolina. Others elected from the 8th District include Martin Ericson, Wendy Pascual and Ruth Hilton from Cabarrus County, and Michelle Torres from Cumberland County.