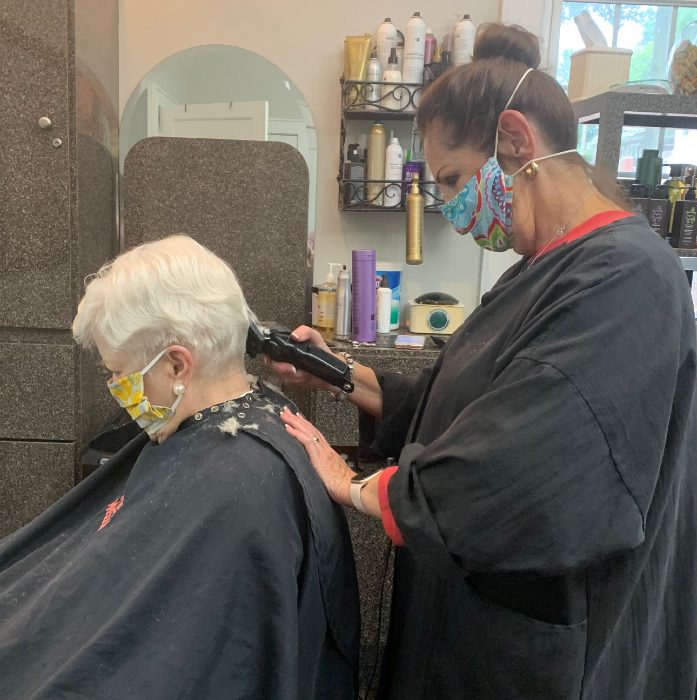 Just a few weeks ago, Susanne Boles was unemployed and spending her days at home in Albemarle.

Boles, who owns Cut ‘N Style hair salon in the city, desperately wanted to get back to work cutting hair — something she had been doing for 40 years.

“This is my livelihood,” she said in an interview with the SNAP in April. “I don’t know how to do anything else.”

Thanks to phase 2 of Gov. Roy Cooper’s reopening plan, which went into effect May 22 and allows numerous businesses — including hair salons and barbershops — to reopen, Boles has been able to return to her salon and resume her life’s work.

And the pent-up demand for haircuts has kept Boles and many stylists and barbers in the county busy over the past week. She’s working extra hours each day and has also tweaked her work schedule. She is now working on Tuesdays, something she didn’t do before the coronavirus pandemic.

“It’s been crazy,” she said about the past week. But the frenzy for haircuts won’t soon abate: “For the next four weeks, until the end of June, I’m completely booked up,” she added.

Though she’s back at work, things are still different than they were pre-pandemic. Because salons can only operate at 50 percent capacity, only six people (including the stylists) are allowed inside Boles’ salon at any given time. She and her two stylists (who are each spaced six feet apart) are also required to wear masks and she encourages the customers to wear them as well; she said most have done so.

“People were really desperate to get their hair cut,” Boles said, noting her clients told her “they didn’t realize how important a role it would play in their lives.”

And for many people, going to a salon means much more than simply receiving a much-needed hair cut; it’s a community gathering place where people can connect with friends and learn what’s happening around the county.

“We’ve really missed our clients,” said Stacy Lee, owner of the Purple Pinkie Salon in Albemarle. “When you have a small town beauty shop like we have your clients are almost like family. It’s really good to get back in the salon and see them again.”

While her clients have been happy to receive a long-awaited haircut and get their nails done, “I think they’ve been just super happy to get out and have this time to visit with people,” Lee said.

Like Boles, Lee has also been incredibly busy. Aside from the extra hours each day playing catch-up, she worked on May 22 and the following Monday, two days she usually has off.

Once it was allowed to reopen, Purple Pinkie Salon placed a note on the door asking people to wait in the car and call to see if there were any appointments available.

“That worked really well,” Lee said, along with the other necessary precautions like social distancing and wearing masks.

When Lee first closed the salon in late March, she didn’t know when she could reopen. As time passed, she feared customers would not want to come back and was concerned about lost revenue. She didn’t apply for any federal loans because the stylists who work at the salon aren’t on the payroll; they are independent contractors who rent the space.

John Almond, who owns Phase One Barber Shop in Albemarle, said last week had been the busiest in his 26 years working as a barber. Six people were waiting at the shop when he arrived 5:30 a.m. May 22 to officially reopen the business.

He works to make sure his customers, many of whom he said are fearful of the virus, are as comfortable as possible, which includes making sure people are spaced apart and making sure he wears a mask. Two of his older customers who were weary about the virus actually arrived after hours to receive haircuts.

Though Almond has other streams of income in the form of commercial rental property, which made it easier for him to be away from the shop for a few months, he was still excited to reopen. “I was ready to get back for my customers and then also for myself,” he said.