Albemarle Fire improves insurance rating from 4 to a 3

Albemarle Fire Chief T. Pierre Brewton came before the Albemarle City Council June 1 to present it and the public with some good news: the department had improved its fire classification rating from a 4 to a 3.

The OSFM grades departments across the state on a scale from 10, which is basically not a functioning unit, to 1, which is what every department strives to achieve.

“I commend you and your department for your dedication and commitment to making your community a safer place to live,” wrote Insurance Commissioner and State Fire Marshal Mike Causey in a letter to Brewton.

“This is huge not only for the fire department but it’s also huge for the citizens,” Brewton told the council, adding that it’s especially attractive to businesses looking to move to the city.

“Businesses search out for those departments that are ranking 3, 2 and 1,” he said. 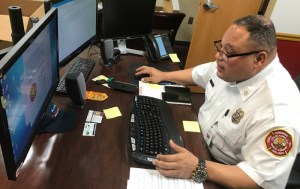 In a press release about the achievement, Brewton said the next step is for the department to work towards improving from a 3 rating to a 2 rating, which will be achieved through “refining emergency operations and practices, maximizing staffing and aggressive community risk reduction.”

The improved grade should allow residents to save money on homeowners insurance, but Brewton doesn’t know when exactly that will take place or how large the savings would be.

Ferris, who received a letter from OSFM in mid-May detailing the news, said that to his recollection, the city had never before received a 3 rating, and the last grade change was around 15 years ago.

The council agreed that in addition to Brewton, who has been chief since Jan. 21, and the current firefighters, former chief Shawn Oke and interim chief Ernie Hiers also deserved credit for the accomplishment.

“The firefighters that you have here are second to none,” Brewton told the council.

Even with the advanced rating, the obligation for the department remains the same, Brewton said, which is to protect the citizens.