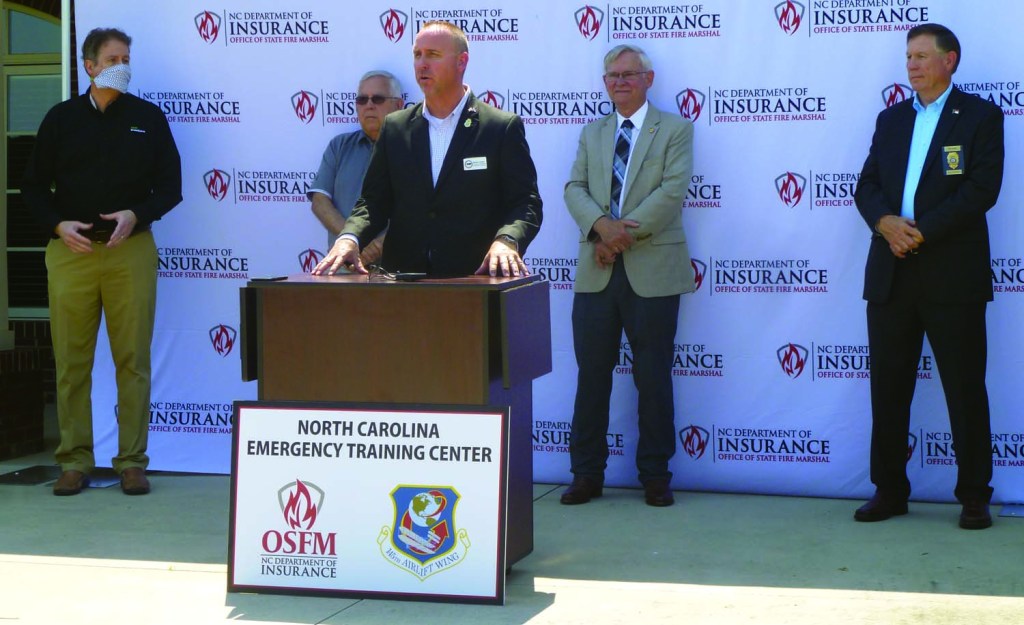 County and state representatives gathered at the Stanly County Airport Thursday afternoon to mark the completion of the broadband installation project. The project will support the planned N.C. Emergency Training Center.

The project set up a gigabit broadband network at the airport.

“This project has been just a great addition, and I want to do everything I can as state fire marshal and through the office of state fire marshal to help you,” Causey said. “The high-speed internet is going to play a huge role in expanding this emergency training center, in my opinion.”

Causey credited Sasser for his contribution.

“This is a big day and I thank Representative Sasser and the legislature for providing funding to make this high-speed internet a reality, and thank you all for having me and it’s an honor to be here,” Causey added.

Sasser said that having broadband will be critical for the nearby Albemarle Correctional Institution.

Residents in the area will also benefit, he said.

“I ran on this platform with broadband, and everybody was telling me, ‘No, roads are what’s important, and we’ve got to get people to Charlotte’ and all of this stuff,” Sasser said. “COVID eliminated that problem. People are working at home, people will continue to work at home, and the reason is, their business doesn’t have to rent some high-rise in Charlotte for them to sit at an office and work. If they’re self-starters and they can work from home and they’d rather work from home and they do a good job, it’s a win-win.”

“On behalf of the Stanly County government and the Stanly County citizens, it is a pleasure to have Commissioner Mike Causey in Stanly County and our beautiful airport,” Lawhon said. “We appreciate his efforts to bring broadband and the proposed Emergency Management Training Center to the Stanly County Airport. That’s great. As you know, broadband is crucial for the year 2020 and the years ahead. The long-term economic success of our airport facility and the community are linked with the ability to bring more robust, more wide-spread, more competitively-priced broadband to Stanly County.”

Lawhon said he believes that both the broadband and training center will benefit the county.

“Businesses, families, healthcare and the future delivery of educational support for our children all rely on universal broadband,” Lawhon said. “The high-speed wireless internet service broadband deployment at the airport facility can be a model of how we might deliver broadband throughout our rural county. The proposed emergency management training center is an exciting venture that would align very well with our community and our partnership we already have with the Air National Guard. The training center will help generate operational and strategic advantages for public safety officials that will also lead to additional spending in our local community at hotels, restaurants and other retail merchants, and this spending will also help to boost the economy of Stanly County.”

Alan Fitzpatrick, founder and CEO of Open Broadband, said he created the North Carolina-based company when he saw the disparities between counties that had high-speed internet access and those without.

“We started the company a little over three years ago because we saw plenty of people that were being left out of high-speed internet, especially in the rural areas,” Fitzpatrick said. “You were kind of stuck with copper DSL service. I think the airport was on DSL, some of the buildings here are still on DSL. We wanted to do something about that.”

“Our whole mission is to provide high-speed internet to people who need it, and are being left out,” Fitzpatrick said. “One of those areas is right here. It was obviously driven by this (emergency training center) project.”
Fitzpatrick pointed out a nearby tower.

“This tower is now connected to downtown Albemarle… we’re providing gigabit internet speed out into the airport,” he said. “Now, not to be too geeky for everybody, but a gigabit internet is really, really fast — a thousand megabits per second.”

Broadband will help the airport and training center, but residents will be able to improve their day-to-day lives with it, he said. Fitzpatrick noted that tele-health, school, virtual work meetings and more are dependent upon internet access.

“That speed is now available here,” Fitzpatrick said. “And it’s not just future speed. Right now in this building behind me we have service deployed. Anybody that’s on this whole facility, across the way, down the street, can have access to this high-speed internet. It’s very affordable, it’s just something that wasn’t here before. This service isn’t just for business, but it’s also residential. So we put in the equipment to start serving the homes around the airport as well. We believe everybody deserves the right to have high-speed internet.”

Sen. Carl Ford, Rep. Scott Brewer and a representative from Stanly Community College were unable to attend the event due to other engagements, according to Taylor.

To learn more about Open Broadband or to get on the waiting list, visit OpenBB.net.