Following 29 years of service as both an Airman and a U.S. Marine, the Air Force Materiel Command chaplain retired from service June 1.

Chaplain (Col.) Scott Rummage has focused his career on service to Airmen. 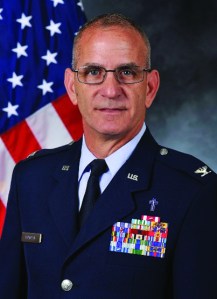 “If you had asked any of my high school classmates, no one would have told you that this farmer from North Carolina would ever be an officer in the military and certainly not a Command Chaplain,” said Rummage.

Thinking back he could see something memorable in each of his duty assignment locations.

Rummage described memories of the beauty of the area around Malmstrom Air Force Base, Mont., where he rode mountain bikes and snowboarded. More important was what he referred to as the “great ministry” of traveling hundreds of miles to visit Airmen in missile alert facilities.

The assignment he referred to as being the most impactful was at Vance Air Force Base, Okla.

“It is not the end of the world, but you can see it from there,” he said.

Rummage describes ministering to young officers learning to fly as “incredible” and being present when wings were pinned on as “tremendous.”

“Taking care of Airmen and their families is easily my greatest joy,” he said. “Being present with them in good times, difficult times, and during times of sorrow…just during life in general was spiritually rewarding. I also love providing caring oversight and a listening ear while present with Airmen in their work centers as I do unit engagements.”

One of the chaplain’s glances back was from the perspective of “I wish I had known in the beginning what I know now,” in respect to working closely with leadership.

As the extended arm of the commander with the charge to execute the leader’s priorities and spiritual goals, he spoke of wishing he had known earlier in his career how to better walk alongside a leader and to be someone in whom the leader could confide.

“Being a leader doesn’t mean they have all the answers. It’s something you learn as you go,” said Rummage.

Rummage grew up in the church, but did not come from a long line of military service. During a high school career day he saw a Marine Corps recruiter and knew instantly what he was supposed to do. Six months into his enlistment, he knew he was to become a chaplain.

After four active and two reserve years in the U.S. Marines, Rummage resigned to attend college and seminary. During seminary he was recruited by the Air Force, commissioned as a chaplain in the Reserves in 1988 and entered active duty in the Air Force in 1996.

With 29 years of active duty service and an additional nine years as a reservist, listening and being honest with Airmen, whether active duty, civilian or contractor, was Rummage’s focus and considered by him as the most important thing a chaplain can do.

His greatest military and personal challenge throughout his career was being away from family.

“My family is very important to me, but at the same time, the ministry, while deployed, is like no other,” said Rummage.

Rummage advises Airmen that as future leaders, each day of life is worthy of one’s best efforts. Airmen need to keep their priorities straight and think before acting.

“Grow every day. Learn something about leading people every day. Pray every day,” said Rummage.

From here, Rummage plans to move closer to family in Birmingham, Ala., where he hopes to volunteer in a family church. This will be the first step towards taking what he has learned from his military experiences back into the civilian world to share with pastors and other leaders.

“I have always approached leadership as a coach and used a coaching style to develop those I work with. I want to continue this call as a leadership coach in the future,” said Rummage.