The suspect who allegedly charged an officer with a knife earlier in the week has been identified as Derrick Antonio Rogers. 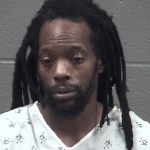 Derrick Antonio Rogers was arrested after he charged officers with a knife earlier this week. Photo courtesy of Stanly County Sheriff’s Office.

Rogers, 34, was charged with two counts of assault with a deadly weapon on a government official and two counts of resisting a public officer, said Sheriff Jeff Crisco.

He is at the Stanly County Jail on a secured bond set at $100,000. His next court date is July 6 in Albemarle.

Around 1:15 p.m. Monday, sheriff’s deputies and Norwood officers responded to a residence on U.S. Highway 52 South regarding a domestic disturbance involving a subject with a knife.

Once at the home, the officers found Rogers armed with a knife. After refusing numerous commands to drop the knife, Rogers allegedly charged at the officers. An officer fired two rounds, which struck him in the arm.

The officers rendered first aid and Rogers was transferred to Carolinas Medical Center with non-life-threatening injuries.

The investigation is still ongoing and is being conducted by the North Carolina State Bureau of Investigation.