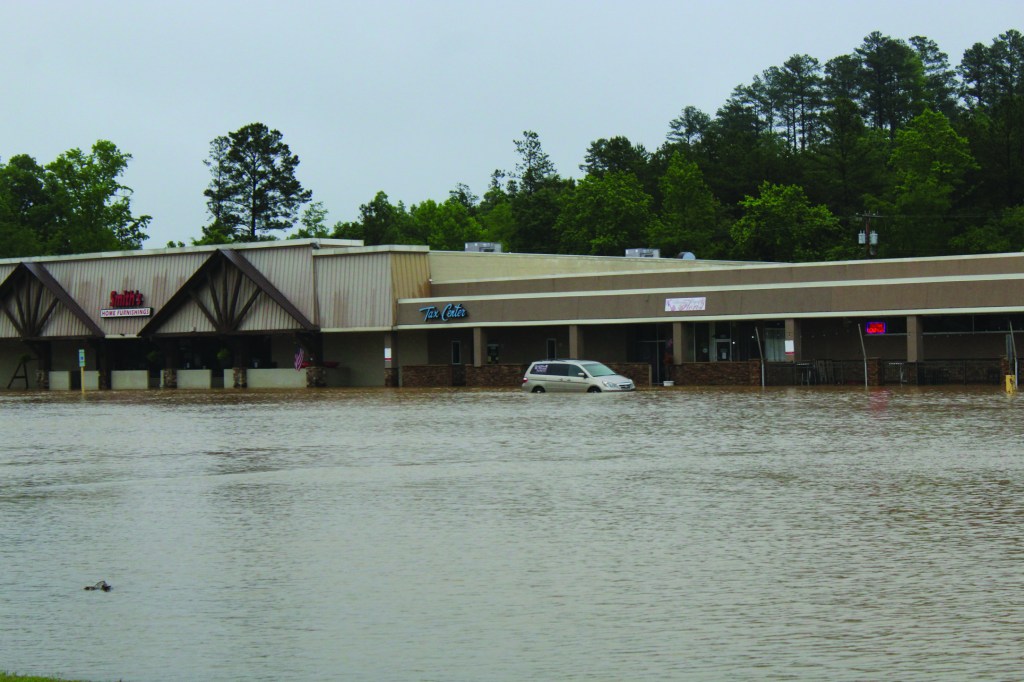 The parking lots along U.S. Highway 52 businesses such as Gold's Gym, Little Tokyo, Medical Pharmacy and others was completely flooded May 21.

“I have never experienced the flooding that happened at my residence that night,” she said.

Over a span of a few hours last Thursday, the city had approximately four inches of rain, Stanly County Emergency Services Director Brian Simpson said. The city averaged about two inches of rain per hour, he said.

Eight confirmed water rescues also took place during the night, mainly in Albemarle, and 24 roads were blocked due to flooding, including U.S. Highway 52. There were no injuries.

During another period of heavy rainfall in May, the National Weather Service reported that certain spots in the county received between 5 and 8.7 inches of rain. More than 80 roads were closed and at least five water rescues took place.

“These flood waters on Thursday night were unprecedented by any measure,” Councilman Bill Aldridge said.

Flooding has been an ongoing issues for the city for decades — especially for many of the residents who live near streams or creeks.

One of the main issues that contributes to the flooding is that of the city’s nine sub basins forming Little Long Creek watershed, six of them peak at the same time, which is about one hour after an intense storm, according to a 2001 flood study.

“The coincidence of timing and an inefficient channel directly leads to more frequent flooding than might be expected,” Municipal Engineering Services Company, which performed the study, wrote.

The deluge of water Thursday night filled Hudson’s yard with five or six inches of rain and made her fear for her safety.

Lina Chandler, who has a creek that flows behind her house on Ridge Street, said that water has flooded her yard and seeped into her basement numerous times over the past decade, including twice in 2020. The flooding is also eroding her property.

As a result of Thursday’s flooding, she said it took 26 large trash bags to move out damaged items. She had to pull out baseboards and sheetrock as well.

Chandler would like to possibly downsize, but she worries people will not want to purchase a property that is prone to flooding.

Benton Dry, of Dun-Rite Restoration, has helped Chandler with her flooding problems. He said the problem isn’t necessarily the amount of water, but what the water brings in, especially mud.

“What’s in that mud that came out of that creek that jeopardizes the population of Stanly County, Albemarle in particular?” he told council.

Though the city cleans bridges, culverts and catch basins, they are not allowed into the stream beds to clean them out, Mayor Ronnie Michael said.

Last year, City Manager Michael Ferris and Public Works Director Ross Holshouser made a visit to the Mooresville Regional Department of Environmental Quality Office to discuss the flooding issue. They were told the city could not change or alter the creeks and streams (including removing silt and sediment) in any way because they are waterways of the state.

“We’re overwhelmed as well and that’s quite a challenge,” said Ferris, noting that some of the challenges are beyond the city’s current capacity.

He said that since there is no delineated environmental or creek management division within the city, it’s been hard to combat the issue.

“I don’t think there’s no magic bullet, but that’s why we need to partner with others,” he said, referring to the county and NCDOT (which maintains state roads, highways and bridges).

“What we need is some state and federal help to work on this flooding issue,” Michael said.

The flooding also has resulted in potential health issues.

Cheryl Davila, who lives on Hinson Street, said that after flooding, mold appears. She is worried about her two grandchildren, who both have asthma. Davila, who has no flood insurance, said her air conditioning unit has also been destroyed by the flooding.

“Water is so powerful, it can damage so many things,” she said.

Holshouser said the street division of the public works department has a list of areas that are prone to flooding and they regularly check on them before a heavy rainfall to make sure there are no blockages. They also inspect and clean catch basins, along with bridges, underpass and culverts.

He said the city has no mapping records of the stormwater system and no maintenance program established. The aging infrastructure dates back to the beginning of the mill years and pipes, culverts and catch basins are starting to fail. Comparing the stormwater infrastructure to the aging commercial structures downtown, he said “if you’re not going to invest in a certain structure, it’s going to eventually erode…and it’s going to fail.”

There are also no clear policy or guidelines for how to alleviate problems that arise on private property which makes it hard for city staff to resolve issues that come up.

While some cities have implemented stream restoration projects, they are expensive and need approval by the state, Holshouser said.

City Attorney Britt Birch has already contacted the Army Corps of Engineers to see if it can come to the city to evaluate the waterways. Council asked her to research and contact the Department of Environmental Quality to understand what is preventing the city from being allowed to clean out stream and creek beds.