The killing last month of George Floyd, an unarmed black man in Minneapolis who died after an officer kneeled on his neck for nearly nine minutes, has placed the national spotlight on police departments, especially regarding excessive use-of-force policies. Protests against police brutality and systemic racism have occurred the last few weeks in major cities across the country, including a few in Albemarle.

In order to better understand the dynamics between the police and the communities they serve, The Stanly News & Press interviewed police chiefs, academics and citizens about their views regarding the current state of law enforcement.

Norwood Police Chief James Wilson said he was “disturbed” after watching the video of Floyd’s death.

“That’s not something that we as law enforcement sign up for,” he said, adding that it’s a “horrible representation” of what officers stand for. Police chiefs in other municipalities in the county echoed his sentiments.

Though the majority of police officers work to uphold the law and serve and protect their communities, they can often get overshadowed by the actions of rogue officers, like those in Minneapolis, he said. They are the ones that most often receive media attention, which “puts a black eye on our profession,” Wilson said.

“We sign up for this job to serve the public and try to make a difference,” Wilson said.

And part of the job requires sacrifice — including time spent away from family and in certain extreme cases, the loss of life.

He said in every job there are some bad apples, “and we are no exception to that,” but at the same time he stressed police officers should not be negatively stereotyped based off the actions of a few officers.

While Wilson did acknowledge systemic racism is still a concern in some agencies, he said it hasn’t necessarily been a problem for law enforcement agencies in Stanly, especially compared with those in bigger cities.

Use of force policies

The SNAP reached out to several police departments and the sheriff’s office to examine their use-of-force policies. Though they all might have slightly different language, most of the key guidelines regarding use-of-force are quite similar.

Per the Sheriff Office’s guidelines, officers should use physical force “greater than reasonably necessary to accomplish a lawful detention or custodial transfer, effect a lawful arrest, or to protect the officer or a third person against unlawful assault, battery, threat of death or serious bodily injury.”

Whenever possible, sheriff’s deputies should first try and de-escalate the situation, which includes identifying themselves and directing the individual to cease their unlawful actions. Officers can only escalate their use of force when these types of lower force options have failed or would be “clearly ineffective.”

Albemarle police officers must first “exhaust all other means of achieving a lawful police objective” before employing force and any excessive use of force “will not be tolerated by this department.”

For any non-lethal force, Albemarle officers should use the least amount of force necessary to arrest a suspect and should consider a suspect’s age, size and or disability, if any, before using force.

For all of the use-of-force policies analyzed by the SNAP, officers are justified in using deadly force when it is necessary to either defend themselves or someone else from what they reasonably believe to be the imminent use of deadly force or to arrest or prevent from escape a person whom they reasonably believe is either attempting to escape by utilizing a deadly weapon or is presenting an imminent threat of death to others.

According to Norwood’s policy, “the reasonableness of an officer‘s use of force must be evaluated from the perspective of the reasonable officer on–scene at the time of the action rather than with 20/20 hindsight.”

Its policy dictates that whenever an officer observes another officer using force “that is clearly beyond that which is objectively reasonable under the circumstances,” he should safely intercede to stop the use of force.

The use of deadly force for Locust police, and many others, is prohibited on a felon who is fleeing, unless the officer believes the felon presents an imminent threat of death or serious physical injury to others.

Whenever an Oakboro police officer uses force against another person, it is required that Police Chief T.J. Smith “or his designate” be notified. Smith would then conduct an investigation into the incident and file the appropriate reports. 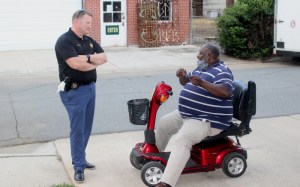 For instance Norwood officers, if the need arises, can utilize a lateral vascular restraint, a technique that renders the subject unconscious without blocking any airways.

“Those are very limited and do not happen often,” Wilson said about the restraint.

He noted that the use of chokeholds, like the one used on Floyd, are largely prohibited in departments.

In all of the departments, the firing of warning shots is prohibited.

Wilson said prospective police officers go through an extensive background check before they even complete basic law enforcement training. Once training is finished, but before being hired, they also take a psychological examination to assure they have the capacity to make good decisions. Command officers also conduct interviews to learn motivations behind why the recruits want to join the force.

“I think that conversation is important to have with any type of new recruit or new employee to make sure they’re in it for the right reasons,” Wilson said.

As part of an officers’ continuing education, they take juvenile minority sensitivity training and also have de-escalation classes to prevent potential conflicts from escalating out of control, Wilson said.

Buchanan noted an important step for law enforcement to become more receptive to the people they serve is for departments to build and maintain community relationships — especially with people of color.

“Finding ways to extend diversity and implicit bias training to the community at large as a partnership between law enforcement and the community would go a long way toward improving relationships around the country,” Buchanan said, adding that officers are expected to uphold high standards of integrity.

Many states have already enacted new legislation in response to the protests, such as banning chokeholds and no-knock warrants. Congress is also working to pass police reform legislation, which calls for a ban on neck restraints.

Tym Scott, president of the Stanly chapter of the NAACP, said he approves of the performance of the Albemarle Police Department.

“I think Chief Dulin is doing a great job with the law enforcement here,” he said.

But Scott stressed legislation alone will not necessarily bring about change; substantive change will not take place, he said, “until you have it in your heart and your character changes.”

“You have to want to do better,” he said.

Despite any differences people may have, Scott said, they ultimately have to live and work together in order to change the world for the better.

“We’ve got to love one another regardless of race, creed, color or religion,” he said.