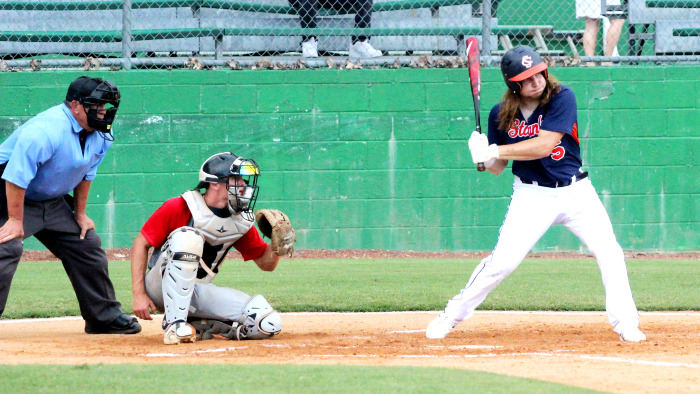 Riley Huneycutt digs in for Stanly during Monday's non-league game with Greensboro. (Photo by Charles Curcio/staff).

Fans at Monday’s non-league N.C. 3 baseball game between Stanly and visiting Greensboro had to have some déjà vu when dark clouds approached from the west.

The rain was late arriving in the game.

A wild pitch and a towering three-run home run lifted the visitors to a 11-7 non-league win over Stanly.

With the bases loaded and two away in the top of the ninth, a wild pitch allowed one run to score breaking a 7-7 tie. Aldan Kolessar, the leadoff hitter for Greensboro (1-1), drove a Garrett Maner pitch deep into the night sky over the fence in right field.

Each team pushed two runs across in the first inning, but it was Greensboro who built a sizable early lead. The visitors were buoyed by a T.J. Ash three-run rocket over the centerfield fence in the second inning.

Stanly pulled back to within one run in the fourth. Jack Foley laced a line drive over the right field fence and Connor Tucker later drove in two with a double. He then scored on a Cody Kidd infield single and the hosts trailed 7-6.

With bad weather continuing to close in, Stanly tied the game in the bottom of the seventh on Riley Huneycutt’s two-RBI double to the warning track in left-center field.

Stanly head coach Jordan Sells noted Monday was the first time in three months any of them had played a whole game.

“They were involved in every pitch,” he said. “They were getting to actually compete. It’s been a long layoff for them and I thought they did a good job just competing tonight.

“You can take as many swings in the batting cage and throw in the bullpens, but nothing replicates live game action.”

Monday was the final of two non-league games before Stanly starts its league schedule versus Mount Airy Wednesday night at The Ball Park at West Stanly.