Tammy P. Hollar was taken into custody Thursday morning by Stanfield Police Department after being a fugitive since May 13.

Stanfield Police Chief Corie Faggart said Hollar was arrested at 135 W. Thomas Ave., Oakboro, in a camper in the backyard. 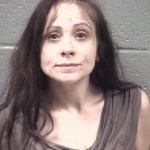 “No one would answer the door so we got a search warrant and found her hiding under a bed,” Faggart said. “She did not resist once she was found.”

On May 13, the Stanfield Police, with the assistance from the Locust Police Department and Stanly County Sheriff’s Office, executed a search warrant at Hollar’s home at 103 Hill Top Ave., during which multiple illegal drugs were found.

She was booked in to the Stanly County Jail on a $30,000 secured bond.