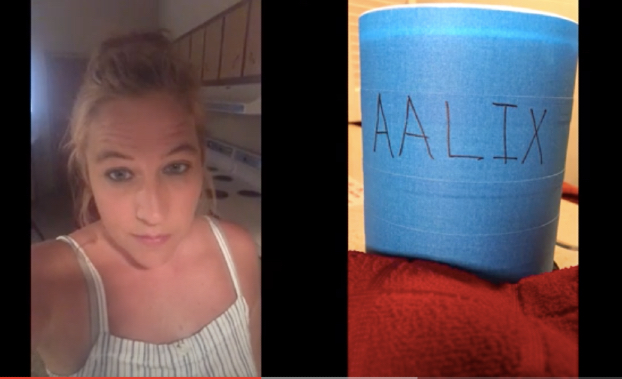 In the first scene of "The Virtual Family," Mom, played by Gina Clarke, tries in vain to get her questions answered by AALIX, voiced by James Cotton.

While the Uwharrie Players had to cancel the summer show of “Little House” due to the coronavirus pandemic, the theatre group still found a way to continue acting and producing content for the community — albeit in a slightly different format.

While the group created a committee to figure out ways to continue to stay relevant during the pandemic, one member, who had subscribed to a drama service, was recently sent a script for a timely play called the “The Virtual Family,” written by Jeremy Johnson.

The play features 13 small scenes — around five to seven minutes in length — about a family dealing with life, and all its challenges, at home in quarantine.

“It was obviously written during the quarantine because it is very much about what we are all going through right now,” said James Cotton, a member of the Uwharrie Players Board of Directors and the director of the project.

The members of the Players have been filming individual scenes with their phones and Cotton, a professional filmmaker, has been editing them together to form the complete videos. The first one — titled “Conversations with AALIX” — features a frustrated mom, played by Gina Clarke, trying to communicate and ask questions through Zoom to her computerized helper AALIX, modeled after Amazon Alexa and voiced by Cotton.

“Everyone who has one of those digital assistants has probably been through this where you’re asking for something and it keeps misunderstanding you,” Cotton said.

He said he’s had his own frustrations with Siri on his iPhone.

Cotton released the inaugural video last week on his YouTube channel — Wolf359Productions — and it was quickly shared on the Uwharrie Players’ Facebook page.

The Uwharrie Players have already filmed four scenes and the plan is to release a new one each Monday night.

Aside from Clark as Mom and Cotton as AALIX, the rest of the cast includes Jon Bowlby as Dad, Debbie Williams as Grandma, Tyler Poplin as Son, Macy Preslar as Daughter, Madeline Crump as Cat, Amanda Griffey as Bob-B, Blair Burris as FAB, Kent Harkey as Toothbrush and Heather Jones as Kitten.

Cotton hopes that people can relate to what the family in the 13 scenes are dealing with while at home in quarantine.

“This family in this play are dealing with exactly the same things that we all are,” he said, including Daughter trying to find homework for her online class and Grandma looking for her files on her computer. “It’s things that everyday people deal with — in normal life but also in quarantine life.”

While the Players aren’t sure what the future will hold — the play “The Best Man” is still tentatively scheduled for October — Cotton hopes the videos will provide some much-needed entertainment to people. But they also serve a greater purpose: the videos are an easy way to keep the Players visible and relevant to the community.