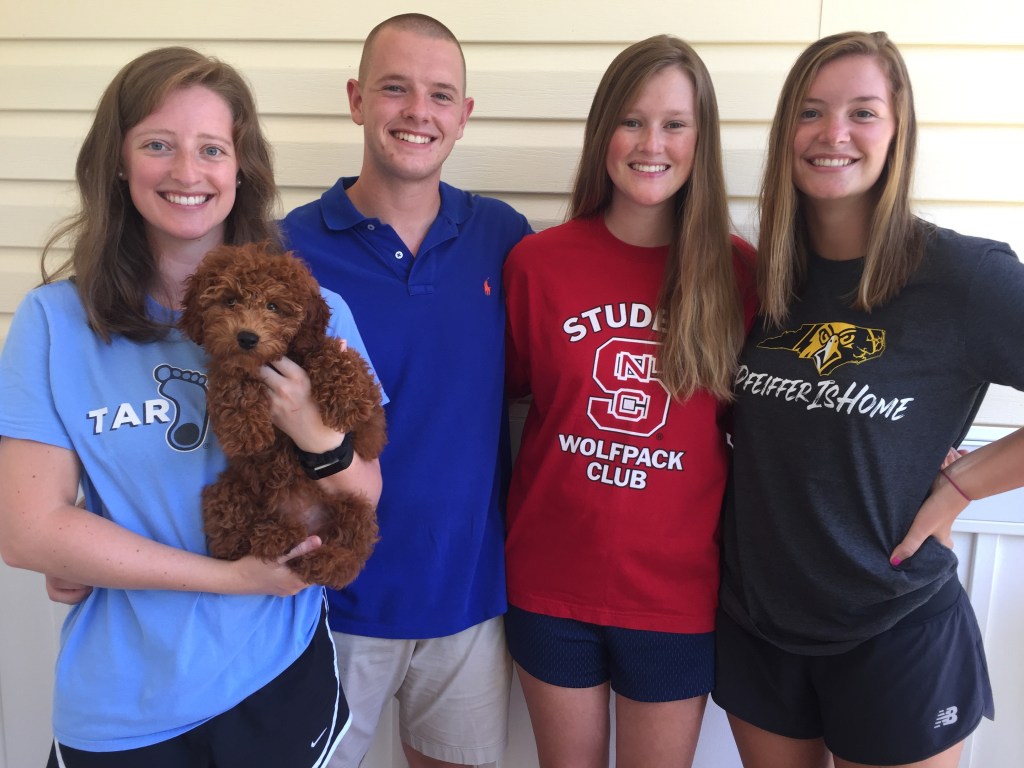 Elizabeth (and her dog Chandler), Eben, Elaine and Elithe Hudson at their home in Albemarle. Photo courtesy of Elithe Hudson.

Positioned at the top of her senior class, Elithe Hudson was looking forward to North Stanly High School’s graduation in June, where she was planning on speaking, even though she had finished school in December and is currently a student at Pfeiffer University.

But like with so much of life these days, the coronavirus pandemic had other plans.

Instead of a traditional graduation ceremony with her peers in front of a large crowd of cheering family and friends, Elithe, 18, along with the other North Stanly seniors, recently participated in a quick drive-through graduation at the school.

“I was a little bummed about not being able to walk across the stage with my friends,” she said.

If Stanly County Schools does have a traditional graduation ceremony later in the summer, Elithe said she will most likely attend.

In addition to not having a typical high school graduation, Hudson’s tennis season at Pfeiffer was canceled in the spring after her team had competed in only five matches.

What has helped blunt the effects of the pandemic has been the silver lining of spending time with her older siblings — who are past North Stanly valedictorians themselves. Her sisters Elizabeth, 23, a 2015 Comet alumna who recently graduated from UNC Chapel Hill’s Master of Accounting program, and Elaine, 20, a 2018 Comet alumna who is a rising senior at NC State University, have been living with Hudson in their family’s Albemarle home since March.

Elithe also has a brother Eben, 21, a 2016 Comet alumnus who is currently a U.S. Marine, though he’s not home with the family.

Elithe said while there was some pressure to graduate at the top of her class like her three siblings, she saw it more as a challenge.

“It encouraged me to work harder because I wanted to be like them,” she said.

Unlike most students, throughout Elise’s and her siblings’ high school careers, their mother Aza Hudson, who retired from the school last fall as its music teacher, played a key role in their education. They all took her chorus and handbell classes.

Elithe said being at the school “was my second home” because of her mom’s presence.

“We loved it,” Elizabeth said about having having their mom as a teacher. “It just added some comfort knowing where she was.”

What’s been comforting for the siblings now has been spending time with each other.

Over the past few months, the sisters have bonded by playing board games like Clue, going to Oak Island beach, renovating their bathroom and taking walks around the neighborhood. They have also enjoyed playing with Elizabeth’s new puppy, Chandler, a Toy Goldendoodle named after Matthew Perry’s character in the hit TV show “Friends.”

“We’re very competitive but we have a lot of fun together,” said Elizabeth. “We’ve always been very close and supportive of each other.”

She added that the girls would not have had the opportunity to live together for the past few months if not for the pandemic.

“A lot of people are going through some tough times right now, but I’m really thankful that I was able to have this time with them,” she said.

Elizabeth, who’s been studying for her CPA exam, and Elaine plan to head back to Raleigh sometime in August, where they will be roommates. Elizabeth already has a job lined up as an audit associate.

Elithe plans to be back on Pfeiffer’s campus in the fall and looks forward to reuniting with her tennis team. She will be a second semester junior since she already has obtained her Associate of Science degree from Stanly Community College.

While Elithe has missed interacting with her friends at Pfeiffer and at a typical high school graduation, spending time with her siblings at home has been gratifying.

“Having friend groups at school are nice, but I had my best friends living with me at home,” she said.